Amy is the coordinator for WSG’s Crab Team, a volunteer-based program that conducts critical monitoring and early detection efforts involved in the invasion of European green crab. In this position, Amy supports Crab Team volunteers through trainings, site visits, data submission processing, and science communication. She works with volunteers and partners to address program needs and to increase efficiency and impact of this important community science program. Data collected through these monitoring efforts are used to inform research and management efforts to mitigate the European green crab invasion in Washington and beyond.

Before joining the Crab Team, Amy was the 2016 WSG Science Communications Fellow and has engaged in a variety of other research and science communication positions. She spent six seasons working in Alaska, as an interpretive park ranger in Glacier Bay National Park and as a science communication intern at the Prince William Sound Science Center. More recently, she designed educational training programs and public events for Washington State University Extension Water Stewardship Program in Kitsap County, Washington. Amy holds a bachelor’s degree in biology from Queen’s University in Ontario, Canada, where she studied the cone mosaic patterns in the retinas of African cichlid fish. In 2017, she earned a master’s degree from the University of Washington School of Marine and Environmental Affairs where she studied the socioeconomic impacts of fisheries closures due to harmful algal blooms in Washington and California. She also has a graduate certificate in climate science from the UW Program on Climate Change. 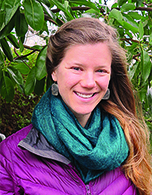