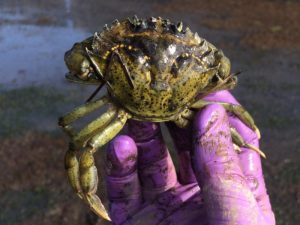 Captures of five European green crabs on San Juan Island and in Padilla Bay last fall mark the first evidence that this global invader has expanded its range into Washington’s Salish Sea. Are you interested to learn what we know about green crab in these areas, what the next steps are in responding to these sightings, and what you can do to help? Join Crab Team for a public talk by Emily Grason, Program Coordinator, and you’ll be one of the best-informed beachgoers around!

The presentation will be held as part of the Sound Water Stewards’ Whidbey members meeting, but is open to the public. The meeting starts at 10am, but the talk will begin at 11. More information can be found at the SWS event page.