Interest in macroalgae aquaculture is growing. Kelp and other seaweeds can be grown for food, animal feed, organic fertilizer, biofuels and other sustainable products. In Washington State, kelp aquaculture grew out of ocean acidification (OA) research. Because macroalgae absorbs nutrients and carbon dioxide as it grows, co-cultivation of macroalgae alongside farmed marine species can help recycle waste, and may buffer vulnerable organisms from the corrosive effects of OA.

WSG staff can help answer your questions about kelp and seaweed aquaculture, and point you towards information resources and relevant educational materials. Some examples include:

Other Sea Grant programs also offer guidance and expertise for those interested in seaweed/kelp aquaculture. Check out the following programs’ resources:

The state of Maine has a thriving kelp industry. Maine’s Island Institute has some excellent aquaculture resources, including curricula for K-5, middle and high school classrooms.

A key recommendation of the 2012 Washington State Blue Ribbon Panel on Ocean Acidification was to assess the ability of kelp and other seaweed to mitigate OA by absorbing CO2. In 2013, the Paul G. Allen Family Foundation sponsored a $10,000 contest to inspire innovative approaches for combating ocean acidification. WSG OA specialist Meg Chadsey and a handful of local researchers and restoration experts thought they had a winning concept: harness the power of fast-growing kelp to take up this CO2 (through photosynthesis) and keep it out of the water column. They didn’t win the “Ocean Challenge,” but the highly-ranked team was invited to submit a full proposal, and they got something even better: $1.5 million in funding to test out the idea. 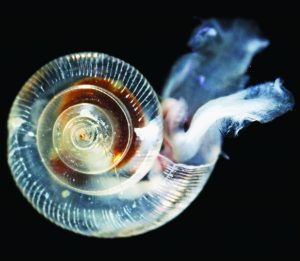 In 2017, the project team, led by the Puget Sound Restoration Fund, finally saw years of planning and permitting come to fruition, as a bumper crop of sugar kelp (Saccharina latissima) streamed from the submerged lines of their experimental aquaculture facility near the mouth of Hood Canal. That April, Chadsey launched the project’s outreach campaign at Seattle’s Museum of History and Industry’s Edible City Science Fair. Visitors learned about ocean acidification and the potential of marine plants and algae (kelps and seaweeds) to mitigate the effects of excess CO2, and got to try some tasty kelp treats prepared by chefs from the Seattle Culinary Academy (a local source of fresh nutritious kelp is an extra benefit of the project! See Kelp as Food below).

The experimental kelp farm has been featured on a CBS 60 Minutes segment: Seaweed Farming and its Surprising Benefits. The power of kelp to combat ocean acidification won’t be known until oceanographers from the the UW and NOAA finish analyzing the 2018 seawater chemistry data, but the team has discovered other potential benefits through collaborations with agriculture and biofuel experts (see From Sea to Soil; and Kelp as Fuel below).

Farming kelp alongside shellfish may offer growers a way to buffer vulnerable oysters and mussels from the corrosive effects of ocean acidification. To test this method, scientists deployed mesh cages of pteropods—delicate marine snails—both inside the experimental kelp bed, and at a distant, kelp-free site. At the end of the growing season, they will compare the condition of the pteropod shells to see whether those from the kelp bed show less damage from acidification. 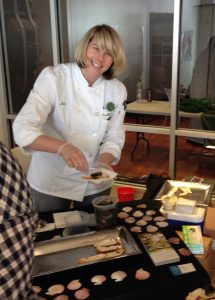 WSG is supporting efforts to develop a market for locally-grown native kelp by piloting ways to prepare and preserve the fresh harvest, helping ensure that the product meets food safety standards, and connecting growers with local culinary professionals. WSG also partnered with students in the UW Communications Leadership Program to develop a Kelp Tasting Kit, to promote the ecological benefits of kelp and its use as a versatile and nutritious food source. The kit will serve as an outreach tool, to introduce the public and chefs to kelp as a sustainable, healthy, locally-grown food. It includes dried kelp, recipes, an educational brochure, a large standing event banner, and a cooler for easy transport.

From Sea to Soil

The Hood Canal kelp farm (described above in ‘Mitigating Ocean Acidification’) was extremely productive. At peak season, over 40,000 pounds of sugar kelp grows from the submerged lines. That biomass represents a lot of captured carbon, but unless the kelp is harvested, it will eventually decompose back to CO2, reversing any beneficial effect on seawater chemistry. Towards the end of the first growing season, UW agroecology expert Beth Wheat (pictured above, with aged kelp compost) stepped up with an ideal solution: if harvested kelp could be transported to her Whidbey Island farm, she would apply it to her pasture, and even experiment with various ways of integrating the captured carbon and nutrients into the soil. In July 2017, 14,000 pounds of sugar kelp harvest was delivered to SkyRoot Farm on Whidbey Island for composting trials. Beth continues to monitor the effect of this kelp on soil carbon content and productivity.

There is significant interest in kelp- and seaweed-based biofuels. In 2017, U.S. Dept of Energy ARPA-E Program awarded $22 million in funding for 18 innovative projects as part of the Macroalgae Research Inspiring Novel Energy Resources (MARINER) program. MARINER projects will develop technologies capable of providing economically viable, renewable biomass for energy applications without the need for land, fresh water, and synthetic fertilizers.