This project will deploy a new imager network to collect and disseminate continuous, broad-scale data on harmful algal blooms to improve detection, monitoring, and mitigation processes.

Washington Sea Grant-supported researchers provided teachers and students with hands-on tools, curricula and assistance to take advantage of this synergy. The team developed ocean technology and engineering instructional materials for STEM education initiatives—including the Olympic STEM Partnership Program—ran workshops, and developed a webinar for teachers on how to construct temperature sensors with students. They developed data-logging sensors coded with user-friendly software that is easy for students to program and operate. Working with Clallam Bay teachers and students, the team taught oceanography topics spanning ocean technology and ecology such as harmful algal blooms, biophysics of organism sensing and locomotion, and data analysis.

Team members directly engaged 45 middle and high school teachers, indirectly involved 90 others and reached 2,080 students. Students from the Suquamish Tribe’s Chief Kitsap Academy were able to construct and deploy marine sensors and analyze and interpret their data. Graduate students worked with a class at Seattle’s Jane Adams Middle School to build and deploy sensors in the school’s wetland.

It was Rose Ann Cattolico who first got UW oceanography professor (and fellow algae aficionado) Daniel Grünbaum interested in Heterosigma, and they coauthored several papers on its behavior. But Grünbaum has since taken a very different approach to the mission of catching harmful blooms before they cause damage: to try to spot Heterosigma cells the moment they emerge from their torpor and begin swimming to the surface. This means monitoring continuously rather than sampling periodically. And that means automation.

With support from Washington Sea Grant, Grünbaum and graduate students Owen Coyle and Elizabeth Tobin (who’s since gained her doctorate and an NSF grant in Alaska), have developed and progressively refined automatic, wirelessly networked in-the-water sensors with video and image-recognition capabilities. These sensors have manifold potential uses; Grünbaum and Coyle have used them to sample protists and other zooplankton in the seawater flowing by a cruising ship. Working with the Suquamish Tribe’s Chief Kitsap Academy, they have also developed a simplified version that students can build and deploy to measure tides, waves, currents, and water temperature.

But their prime goal is to track HABs reliably, inexpensively, and in real time. Advances in microprocessing, networking, and imaging technology have made this increasingly feasible, using cellphone parts and other off-the-shelf gear. Now 3-D printing has filled a key missing link.

The sensors exploit one trick in the alga’s evolutionary bag. Heterosigma thrives in low-salinity waters that repel many of its predators and competitors. The sensors have two miniature pumps, one of which fills an underwater chamber with fresher water from a storage tank. The other then pumps the seawater to be tested into the bottom portion of the chamber, and a halocline barrier forms between the salt and semi-fresh water. Any Heterosigma present swim up into the latter and stay there; other plankton stay below the halocline. A built-in video camera captures and transmits real-time imagery. Image-recognition software can then count the algae present.

A prototype deployed in summer 2011 at American Gold Seafoods’ Bainbridge Island salmon farm accurately counted Heterosigma in the surrounding water. But the rig was as big as an outhouse, with a garbage can-sized water supply, and prone to break down. “There was no way you’d get 10 sensors that would still be working,” says Coyle, “much less get 10 people to let you put them on their docks.”

Coyle arrived after graduating from Princeton and set about refining and streamlining this bulky rig. He eliminated its biofouling-prone PVC piping and replaced its exterior lights, which were exposed to the salt water and suffused the algae in glare, with internal lights and an angled mirror that yielded a crisper image. And he set about producing a smaller, more precisely calibrated structure via 3D printing.

At first Grünbaum, who was on sabbatical in Tasmania, exchanged designs with Coyle by email, printing out prototypes on nocturnal visits to a maker club called the Hobart Hackerspace. “When things didn’t work, which was most of the time, there was usually someone around who could help.” A buddy at Google helped out with a little after-hours time on the office 3D printer. Finally Grünbaum sprang for a $2,000 printer, greatly advancing the development process. 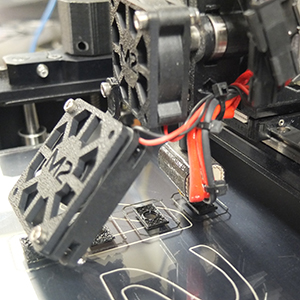 The resulting structure contains about $3 worth of plastic and looks like an oversized inkjet cartridge. Grünbaum wants to get the system’s total cost down to less than $500 per unit and deploy the sensors throughout the inland sea, on a “crowd-sourcing” scale; he’s aiming for 10 to 20 in his current WSG grant. It’s the same principle that underlies the SoundToxins network, only automated. The sensors could complement the human monitors, and track much more than just Heterosigma. They’ve already succeeded in spotting Alexandrium chains as well as passing protists and copepod and gastropod larvae.

Could this technological boost give humans a decisive edge over the elusive blooms? After years of trying to suss out Alexandrium’s ways in Quartermaster Harbor, SoundToxins volunteer Karlista Rickerson is skeptical: “The more our technology improves, the more scientific equipment and molecular data we have, the more DNA we test, the more puzzles we find. The more we know, the more we don’t know.”