Researchers partner with the Jamestown S’Klallam Tribe and others to find cost-effective ways to successfully raise sablefish, or “black cod,” for commercial-scale production.

Native to the West Coast, sablefish is valued in the U.S. for its buttery flavor, and has potential for new markets abroad. While sablefish are highly sought after, their populations are not increasing and the wild fisheries are highly controlled. Aquaculture offers a possible solution to address the gap between sablefish supply and demand. This project brings together scientists from the University of Washington and NOAA Manchester with Jamestown S’Klallam tribal experts in an experiment to grow 12,000 sablefish to harvest size.

The Sablefish (aka black cod, Anoplopoma fimbria) is a deep-water groundfish species with wide distribution throughout the Pacific, extending from Baja California to Alaska, the Bering Sea and through to the eastern coast of Japan. Sablefish are commercially important throughout the North American part of its range. Wild sablefish populations are currently stable and the capture fisheries are highly controlled. Current population levels are lower relative to historic ones and harvests are not expected to increase. As a result, the wild product is limited and is one of the factors driving aquaculture of the species.

To produce commercial-scale quantities for demonstration grow-out and undertake technology transfer to the Jamestown S’Klallam tribe, the current project applied several technologies and innovations that were developed through previous projects supported by NOAA and National Sea Grant. These include rearing larvae at warmer temperatures to speed growth rates, reducing rearing costs by substituting clay for expensive algal additives to larval tanks, and successfully applying an injection vaccine to juvenile sablefish to protect against Aeromonas salmonicida, a common disease of sablefish. A method to produce all-females was also utilized, since growth rates of females are significantly greater than those of males. The commercial potential for sablefish was demonstrated in 2017 through an initial harvest of 8,000 fish weighing more than 40,000 pounds. The harvest employed Westport purse-seiners and a local processor, Ocean Gold Seafoods, thus benefitting the local commercial fishing community. In the current project, these technologies were used by the team, including a technician funded through the Jamestown S’Klallam tribe, to produce 12,000 all-female fingerlings that were transferred in late 2019 to a new netpen system purchased by NOAA. Growth rates are being monitored, and a linked project is examining any changes in sediments and sediment fauna. These fish are predicted to reach commercial harvest size of 1.5-2 kg by the spring 2021. 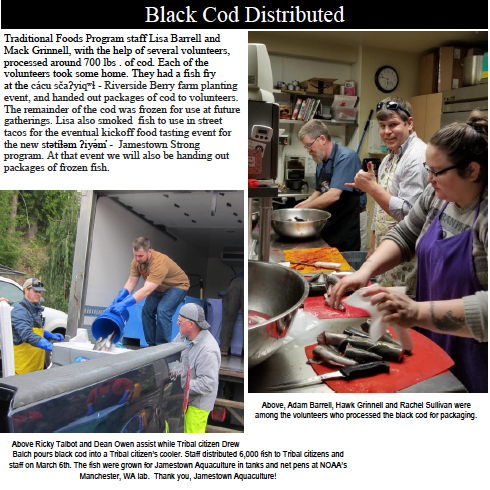 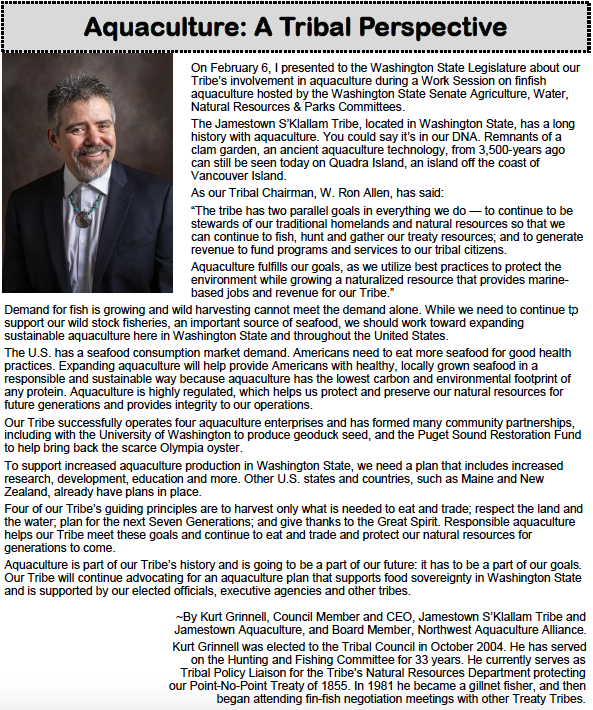 In early 2020, 4,000 pounds of sablefish that had been reared to approximately one pound in tanks for this project were harvested by the Jamestown S’Klallam Tribe and transported back to Sequim, Washington, where they were distributed to tribal members. 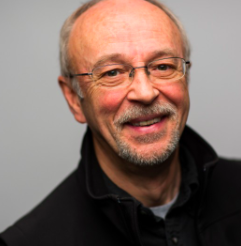