Washington Sea Grant-funded researchers investigated the impact of various coastal processes on light availability in the Elwha’s nearshore environment following the removal of the two dams, including the relative importance of river discharge, tides and waves. To do this, the scientists deployed sensors that measured factors including light, salinity and turbidity at various locations on the seabed and in the water column.

The two dams on the Elwha River trapped roughly 30 million tons of sediment behind their walls over the 100 years they were in place. When the dams were removed between 2011 to 2014, this combination of mud, sand and gravel flushed downstream and into the Strait of Juan de Fuca. The sediment influx changed the nearshore coastal environment—for example, by decreasing the availability of light in the water column, which negatively impacts species such as kelp. While the overall ecological benefits of removing dams are increasingly clear, there is a need to better understand the range of physical and ecological implications of the dam removal process to coastal ecosystems.

The researchers found suspended sediment to be the primary driver of light attenuation, and that the source of suspended sediment is both the tidally varying river plume and the seabed resuspension. They then used this information to understand how much light had been available during the dam removal, since no measurements were taken during that time. This work will help resource managers evaluate other events that will introduce sediment loads into nearshore environments, including other dam removal projects.

Unshackled from its two, large, century-old hydroelectric dams, the Elwha River, on the north side of the Olympic Peninsula, continues its speedy path towards natural recovery. The watershed has been transforming since the 2011–14 dam removals. New forests are sprouting up on now-exposed reservoir lakebeds, and adult Chinook salmon, sockeye salmon, steelhead and bull trout have all passed upstream through the former dam sites to re-colonize the upper reaches of the river.

Perhaps the most dramatic changes can be seen at the mouth of the river, where the coastal delta has substantially increased in size (by 72 acres by the end of 2014). The Elwha and Glines Canyon dams impounded an estimated 21 million cubic meters of sediment, and in the six years since dam demolition began roughly two-thirds of that sediment has been carried down the river. About 90 percent has made it all the way to the Salish Sea.

Prior to dam removal, the nearshore by the mouth of the Elwha was highly eroded and dominated by cobble. Now, the eroded shore has been replaced by a sandy beach, steadily nourished by a stream of sediment washing down from the mountains.

While a boon for local beachgoers, the initial release of enormous amounts of sediment from behind the dams had negative effects on some marine organisms. Surveys by USGS and WA DNR scientists show that kelp density near the river mouth decreased by 60 to 100 percent in the first two years after the 2011 removal of the Elwha Dam—most likely due to reduced light associated with elevated turbidity (suspended sediment) and the decrease of a rocky substrate for kelp to attach.

Kelp rebounded in 2014 at some gravel-cobble sites outside the “sediment deposition zone,” a relatively small area close to the river mouth where at least 10 centimeters of new sediment has accumulated. “We think turbidity had cleared up enough by then to allow for macroalgae growth,” says USGS’s Steve Rubin, who leads scuba surveys of the marine biota offshore of the Elwha River delta. “In the past few years, it appears that algae recovery has continued at gravel-cobble sites as turbidity has continued to decrease.”

To get a better understanding of the interplay between the suspended sediment and light availability for kelp, Washington Sea Grant-funded scientists are conducting a two-year study at the mouth of the Elwha. Led by UW School of Oceanography’s Andrea Ogston, Sea Grant’s Ian Miller and USGS’s Nancy Elder, the team is collaborating closely with other state and federal researchers.

Ogston’s graduate students, Emily Eidam and Hannah Glover, are heavily involved with data collection and analysis. “We’re using sensors mounted on small, steel platforms to look at properties of the water column,” says Eidam, “primarily at the impacts of suspended fine-grained sediments on the availability of light for marine organisms, especially kelp.”

“Fine-grained sediments eroding from the former dam reservoirs are creating a surface plume downstream at the mouth of the river that blocks a lot of the available light,” continues Eidam. “The discharge varies a lot depending on the weather and seasons: On dry, sunny, summer days, the plume can look pretty clear; during extreme rainstorms, however … basically, the water looks like chocolate milk.”

The team is using seven platforms, each one equipped with 10 sensors that measure light, photosynthetically active radiation, turbidity, temperature, salinity, wave energy, and water pressure. The platforms are deployed at about ten meters in different coastal sites near the mouth of the river, and they record continuous measurements of light reaching the seafloor for about two weeks at a time—at which point they’re usually covered in algae and slime and must be retrieved.

The team is deploying the platforms four times per year to capture seasonal variability. They’re also using a large tripod platform that stays underwater most of the year and measures everything the small platforms measure plus a few extra metrics, such as current speed.

“The sediment plume is tidally forced, and gets pushed around a lot when it reaches the sea,” says Eidam. “The plume is very dynamic and changes location roughly every six hours. We’re studying a range of sites on the coast so we can capture that variability.”

“It’s also important that we capture the light signal throughout the water column,” says Glover, “not just at the surface. Only a small portion of the fine-grained sediment coming down the river settles on the sea bed. However, even after this has settled, it can still be active due to turbulence. Sediment can be re-suspended in a cloud near the bed, and this can affect biota.”

After just one year of data collection, the researchers are already seeing results. “We now know that sediment is the dominant factor controlling light reaching the bottom of the water column, which is normal in shallow water around the Pacific Northwest and mountainous regions in general,” says Glover. “Also, we’re seeing definite seasonal patterns in the suspended sediments: Winter storms and spring snowmelt produce more turbidity in the water. And as might be expected, points closer to the river mouth are more impacted by the sediment.”

Steve Rubin, Helen Berry (DNR), and Melissa Foley (USGS) have helped the team figure out the best spots to locate their sensors. They are also helping to deploy and recover the sensor platforms. “The collaborative effort will lead to a better understanding of how the system is rebounding from
the initial disturbance,” says Eidam. “And what the ‘new normal’ will be as sediment loads decrease over time.” 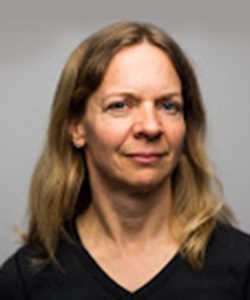 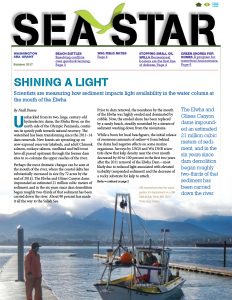