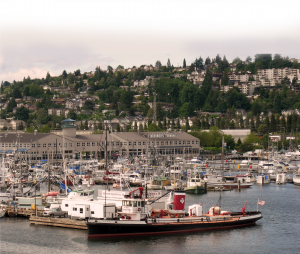 Walking Tour: Visit the heart of Seattle’s fishing industry: Fishermen’s Terminal. Park in the lot and start your tour at the Fishermen’s Memorial. From there, stroll down to the docks and view the variety of vessels. Visit one of three seafood restaurants on-site before or after for a delicious meal featuring fresh, local seafood.

Operated by the Port of Seattle, Fishermen’s Terminal is the home port to the North Pacific Fishing Fleet. The terminal has served working fishermen since early 1900 and today continues to provide mooring for more than 250 vessels that range in size from 30 to 250 feet.

The vessels based at the terminal fish from California to the Bering Sea, seeking squid, herring, salmon, Dungeness and King crab, Pacific halibut, black cod, albacore, pollock, and whiting, using fishing gear that ranges from trollers to gillnetters, purse seiners, crabbers, longliners and trawlers. Some fishermen participate in multiple fisheries throughout the season, changing their gear depending upon their target species. many depend on fishing most or all of their time in Alaska.

The building that surround the terminal house businesses that support the fishermen and the fleet: virtually all Seattle-based Alaska fisheries associations, fishing gear and vessels equipment suppliers, a haul out facility, and a seafood store that purchases directly from the resident fishermen.

Take advantage of the absence of locked gates and walk the docks to explore the range of fishing vessels in the terminal. From the Memorial, walk east to docks 3 and 4. The wooden section of dock 3 is the oldest part of the terminal and home to the Seattle-based Alaskan black cod and halibut fleets, which include several century-old wooden schooners. Dock 4 includes mostly purse seine vessels, which mainly fish for salmon and herring in Southeast Alaska. On docks 3, 4 and 5, depending on the time of year, you may also see vessels that fish King and tanner crabs primarily in the Bering Sea. Docks 7 and 8, in front of the Memorial, are a mix of salmon gillnetters and trollers that mostly fish salmon in Washington and Alaska. Dock 9, the last dock west of the Memorial, holds mostly recreational vessels and purse seiners.

For over 35 years, Washington Sea Grant (WSG) has maintained an outreach office at the terminal, serving the educational needs of fishermen through one-on-one contact and workshops on-site as well as off-site around Puget Sound and the Coast. Topics covered include safety, marine weather, hydraulics, diesel engine troubleshooting, and marine refrigeration, depending upon the current needs of the fishing community. WSG training has been credited with saving lives on numerous occasions. For example, the benefits of the courses were realized when a commercial fishing vessel operated by Makah tribal members sank near La Push in 2016. The boat’s captain had taken WSG’s marine safety course; he and his crew of five followed appropriate procedures and all hands were saved.

WSG has collaborated closely with gillnetters, longliners, and trawlers to develop effective ways to reduce seabird bycatch in their operations through the Seabird Bycatch Program. Ed Melvin, retired WSG marine fisheries scientist, was awarded the 2015 Presidential Migratory Bird Federal Stewardship Award  for his work leading the program. The Seabird Bycatch Program is estimated to have saved over 170,000 seabirds, including over 12,000 albatrosses in the 18 years since Melvin’s streamer lines were adopted in Alaska’s longline fisheries. 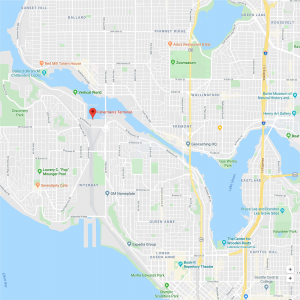 Parking: Parking lot in front, with plenty of free parking.