The largest habitat-friendly, urban seawall in the world. 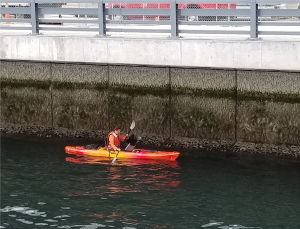 Walking Tour: Visit Seattle’s waterfront to view the Seattle Seawall, an innovative solution to the persistent problem of habitat loss for salmon and other shoreline species in an urban setting. The seawall is seven thousand feet long! At several points along the walkway you can lean over to see the installed salmon friendly portion of the wall; a particularly good spot is just north of the Seattle Aquarium. Afterwards, stop at the Aquarium for a visit, followed by lunch at a Seattle seafood restaurant along the waterfront or stroll north to Myrtle Edwards Park and the Seattle Art Museum’s Olympic Sculpture Park for a pleasant walk filled with art and nature.

Located on the Seattle waterfront along Elliott Bay is the Seattle Seawall, an elegant example of applied research for real world problem solving. Although highly altered by urban and industrial development, Elliott Bay is a rich estuarine environment and a migratory corridor for several species of Pacific Salmon. However, hard armoring typically found in urban settings reduces species diversity and impacts density, size and reproductive capability of many organisms in the shoreline environment, including salmon.

The research team found that two relief panel designs with textured surface supported more diverse communities than the existing seawall flat panels. As a result, Seattle installed textured relief panels with “habitat shelves” and other varied designs along much of its new 7,000-foot seawall. WSG continues to fund research that examines species behavior around the wall during low visibility times. Through snorkeling surveys and installed acoustic cameras mounted under survey kayaks, researchers are observing fishes in their environment. These data will tell us how salmon are visiting this newly enhanced environment. 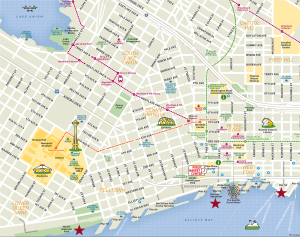 School of Aquatic and Fishery Sciences 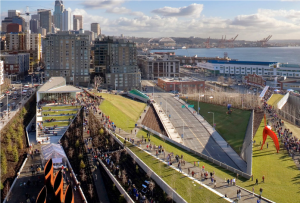