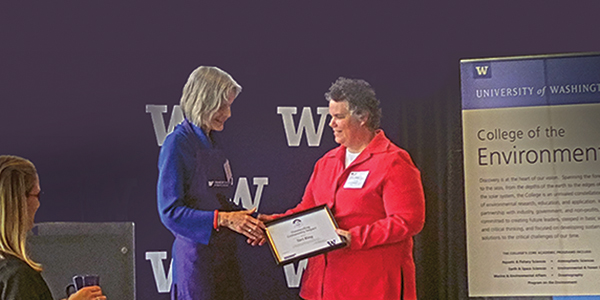 WSG social scientist Melissa Poe has wrapped up an 18-month project, funded by the Puget Sound Institute and U.S. EPA, on the relationship between sense of place and the restoration of Puget Sound. Working with Swinomish Environmental Health Analyst Jamie Donatuto and the University of British Columbia’s Terre Satterfield and Robin Gregory, Melissa examined traditional harvesters’ and other residents’ connections to the Sound through extensive interviews and workshops along the South Sound and Skagit Delta. The team delineated four ways that people become tied to places along Puget Sound: activities such as harvesting shellfish, bird watching, and relaxing at the beach; cultural and family heritage; cognitive and emotional experience; and social connections. They found three factors connecting people to place that might help guide restoration efforts: access, knowledge, and ecological integrity. Melissa presented the team’s final report to the Puget Sound Institute and Puget Sound Partnership in April 2015 and at a special symposium in June honoring the late environmental economist Mark Plummer at NOAA’s Northwest Fisheries Science Center.

The American Planning Association held its national conference in Seattle in April, and Nicole Faghin, WSG’s coastal management specialist and working waterfronts maven, was there to show the delegates what works or doesn’t on Seattle’s shoreline. Nicole took 70 planners from Canada, Bermuda, and coastal and riverine cities throughout the United States on a boat tour from Fishermen’s Terminal to South Lake Union. Like any tourists, they inevitably wanted to see the Sleepless in Seattle houseboat. But they also got a duck’s eye view of current controversies in a city that, for all its gentrified glamour, still has boatyards and fishing fleets within sight of downtown: boat shops vs. an intrusive bike path, city regulation vs. unplumbed house barges, noisy tour boats vs. houseboat dwellers, chic dockside restaurants vs. a working waterfront. Their reaction: “This city is beautiful!” And, upon viewing the F/V Tordenskjold, moored at Fishermen’s Terminal: “I can’t believe that thing is 104 years old and still goes to Alaska!” They talked about their own cities’ waterfront woes. “From the delegate comments about what’s been done to their waterfronts, I saw that we’ve done a pretty good job of keeping ours,” says Nicole. “We’ve been more proactive than a lot of places.”

And a big wet Sea Grant welcome to WSG’s new student assistants, both in their first year at the School of Marine and Environmental Affairs: Thea Rogier, who is assisting this year’s RFP process and other administrative projects, and Annie Hillier, who helped Maile Sullivan host this summer’s NOAA Science Camp and is taking on other administrative work.

It’s been a bumper season for awards at Washington Sea Grant. On May 12, UW’s College of the Environment honored Teri King, WSG’s veteran aquaculture and water quality specialist and Shelton bureau chief, for “Outstanding Community Impact” by a staff member. Dean Lisa Graumlich noted that Teri had staged more than 1,000 events and presentations in 20 years on the water-quality beat, 100 since 2013. “That works out to one a week,” noted Graumlich — and that’s not counting the State of the Oyster, SoundToxins, and Well Education and Training programs that Teri operates in collaboration with Aquaculture Outreach Specialist Jennifer Runyan. They test shellfish, Puget Sound waters, and residents’ well water for nasty things like toxic algae and fecal bacteria.

The same week, news came that WSG senior fisheries scientist Ed Melvin, together with colleagues at NOAA, Oregon State University, the Oregon and California Sea Grant programs, and many other federal, tribal, and fishing-industry partners, had received the 2015 Presidential Migratory Bird Stewardship Award, honoring a federal program for outstanding efforts on behalf of bird conservation.
Like Teri’s award, it’s overdue recognition for 20 years of dogged effort. Ed’s research has proven and refined the use of streamer lines to protect endangered albatrosses and other bait-chasing seabirds from getting hooked and drowned in longline fisheries. From Alaska’s halibut fleet to the Japanese tuna fishery in the South Atlantic, these bait-scaring lines have dramatically reduced, sometimes eliminated, seabird bycatch. Based on his research, NOAA Fisheries has begun requiring streamer lines on West Coast sablefish longliners, and Ed and his colleagues are helping fishermen deploy them. 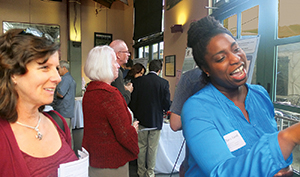 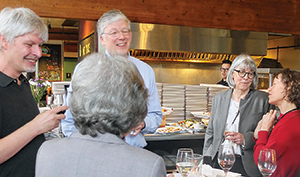 Thank you to all who gave of their time and contributed to the success of the 2015 Site Review.