Back in the early 2000s, Washington State was ground zero for ocean acidification,” Meg Chadsey, ocean acidification specialist at Washington Sea Grant (WSG), says. “Fossil fuel emissions were making seawater more acidic across the globe, but local sources of carbon dioxide were making the problem even worse in Puget Sound.” Oyster larvae began dying by the billions, unable to withstand the corrosive water. It was such an alarming event that in 2012 former Governor Christine Gregoire created the Washington State Blue Ribbon Panel on Ocean Acidification to figure out how to slow down the problem and deal with its consequences. One of the panel’s recommendations was to explore phytoremediation—to experiment with growing kelp, which takes carbon dioxide out of the surrounding water as it grows.

Chadsey and a team of researchers from the Puget Sound Restoration Fund, NOAA Pacific Marine Environmental Laboratory and the University of Washington took this idea and ran with it when they applied for a grant from the Paul G. Allen Family Foundation. They received funding and eventually got an experimental kelp farm up and running at the north end of Hood Canal. Even after the seaweed was growing, however, the team still had one major issue to tackle: what were they going to do with their harvest?

“We had to get it out of the water,” Chadsey explains. “If we simply left all that kelp to rot, it would actually make acidification conditions around the farm worse. As biomass is decomposed by bacteria, it breaks down to carbon dioxide, and everything that was captured by the plant goes right back into the water column.”

Sure, the team had ideas for what to do with the kelp. They could convert it into biofuel—but the process would take additional time, money and connections. They could encourage people to eat it, as Chadsey did at an event with the Seattle Culinary Academy and through an educational kelp tasting kit, which WSG created with students in the UW Department of Communication. But the researchers’ 14,000-pound harvest would be an awful lot of seaweed to eat.

Chadsey was mulling over this conundrum at the WSG office when UW graduate student Amy Brodbeck, a former WSG science communications fellow, overheard her. Brodbeck knew the exact person to help solve the puzzle: Elizabeth Wheat, a marine ecologist-turned-farmer who is a popular lecturer at the UW Program on the Environment.

When it comes to the environmental impacts of conventional agriculture, Wheat sees a lot of room for improvement. “Farms are responsible for producing about 11 percent of our greenhouse gas emissions,” she says—emissions that contribute to the ocean acidification problem that Chadsey and team are trying to solve. But Wheat has long been interested in experimenting with alternative agricultural methods that could turn her farm into a net sink rather than source of carbon. While most U.S. farms end up releasing carbon from the soil into the atmosphere through practices such as tilling, it is possible to flip that equation on its head: to recharge the soil in ways that capture atmospheric carbon dioxide and put it into the ground.

It turns out, some parts of the world recharge their soil with seaweed, letting it decompose into the soil. “In places where farms have been diminished, like Ireland, farmers have a long history of going down to the ocean and collecting plant matter to create better growing conditions,” Wheat says. “Many fertilizers that you buy from the store actually have kelp meal in them, because kelp contains a lot of essential micronutrients that promote plant health.”

Which is why Wheat happily accepted two truckloads full of seaweed at her home, SkyRoot Farm, on Whidbey Island. Soon after, students from one of her UW classes came out and set up an experiment to investigate the best way to incorporate the kelp’s micronutrients and carbon into the soil. “We’re really excited about the possibility of using kelp to help sequester carbon,” Wheat says.

Will the aquaculture experiment show that growing kelp can reduce local ocean acidification? Time will tell. But in some ways, solving the open question of what to do with the seaweed crop has meant that the researchers’ endeavor has already been a win. “This was a serendipitous connection that made this project rewarding and twice as much fun. Even if phytoremediation doesn’t prove successful, it underscores the fact that there are other reasons to grow kelp,” Chadsey says.

“It’s always going to be good to get carbon out of the water and back onto land. That’s where the carbon started before we began releasing it by burning fossil fuels—so, ultimately, we need to get the carbon back there.” In other words, as Chadsey likes to say, we need to bring the carbon back home. 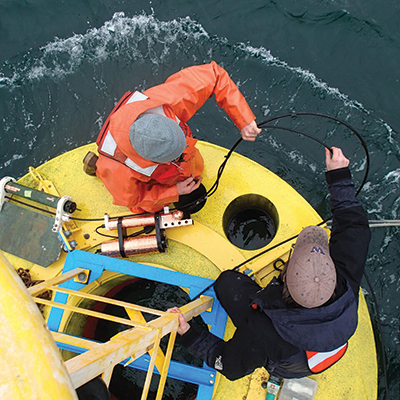 For senior oceanographer John Mickett, the challenges of using kelp to mitigate local effects of ocean acidification started before this project even began. Mickett and his team at the UW Applied Physics Laboratory (APL) were in charge of designing, building and deploying moorings to monitor environmental changes in response to kelp growth. But, while the task was straightforward, the path was not.

The first major hurdle was figuring out the best location for the mooring relative to the kelp bed. In order to monitor ocean acidification parameters—including pH and carbon dioxide levels—the mooring must contend with moving water that is influenced by tides, currents and wind. The water surrounding the kelp only sticks around for about 15 minutes before flowing through.

“It’s a tradeoff,” Mickett says. The high levels of water movement in Hood Canal make it a great place to grow kelp. “But that water flow takes the signal that the kelp creates—higher pH, higher oxygen—and it just whisks it away so fast.”

To address this problem, the team used data of water speeds and directions to figure out where the kelp-influenced water travels, and ultimately decided to place the moorings just north of the kelp bed for maximum signal.

In the first season of the project, however, this didn’t work out exactly as planned. “It looks like the sensors weren’t able to detect the magnitude of change that the kelp causes,” Mickett says. “Not only is the signal really small, but the level of background photosynthesis is much bigger. If you take a really big signal and put it on top of the kelp, it’s going to be harder to parse it out.”

Whatever the outcome, Mickett is confident the results of the project will help us better understand how to mitigate effects of ocean acidification in the future: “Even if it’s just on a small scale … if kelp can help, it’s great.”