In partnership with The Nature Conservancy and NOAA, Washington Sea Grant documented the ecological role of shellfish aquaculture relative to natural habitats, and engaged with industry and the public on growing shellfish sustainably. 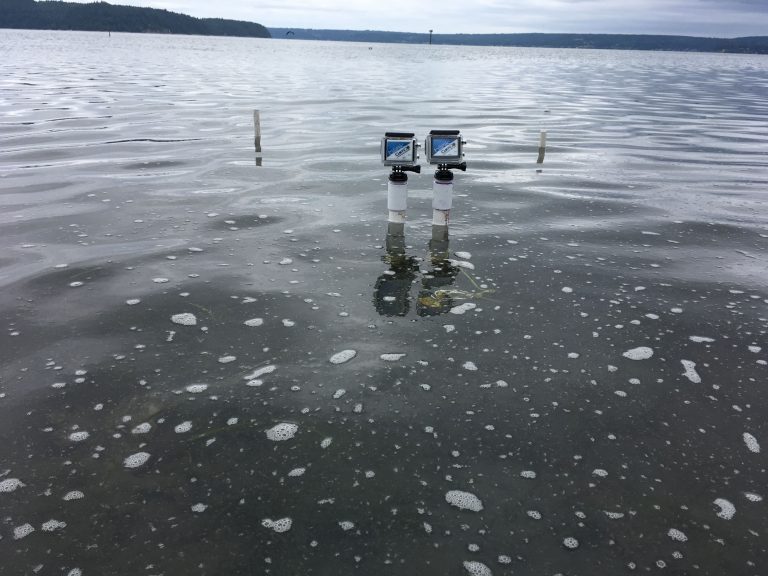 Looking Underwater to Uncover the Marine Environment of Shellfish Aquaculture: Researchers use Go-Pro cameras to document life beneath the surface on shellfish farms

Shellfish aquaculture has the potential to meet or exceed the highest standards of sustainability for food production, but two major barriers constrain expansion: public perception and permitting. With funding from a national strategic initiative, Washington Sea Grant-supported researchers from the Nature Conservancy, UW and NOAA partnered with local shellfish growers to studied how fish and crabs use aquaculture versus non-aquaculture habitats. They did this by collaborating with shellfish growers to deploy video cameras (i.e., GoPros) underwater, and used public outreach use this data to address barriers to sustainable aquaculture growth around public perception and the permitting process. Understanding how shellfish aquaculture affects its environment is critical for resource managers to assess the potential tradeoffs of potential aquaculture expansions.

With funding from a national strategic initiative, Washington Sea Grant-supported researchers studied how fish and crabs use aquaculture versus non-aquaculture habitats. They did this by collaborating with shellfish growers to deploy video cameras (GoPros) underwater. The researchers analyzed a total of 460 hours of footage from 10 sites that represent 3 types of shellfish aquaculture and 2 reference habitats. Towards the objective of addressing public perception around aquaculture expansion, the researchers engaged in outreach that included publishing blog posts, a fact sheet and a short film.

Results of this project, published in Aquaculture Environment Interactions (AEI), demonstrated high or neutral abundances, and increased species diversity and richness in some aquaculture sites relative to mudflats and eelgrass. However, responses were regional and species-specific. The presence of certain species also depended on the type of aquaculture ­— for example, surf perch were more often found in farms that use flipbags than farms where shellfish are grown on the sediment. The project as a whole yielded benefits such as stronger relationships with shellfish growers. However, analyzing the video footage was time-intensive. To ameliorate this for future research, video footage from the project is now being used by Microsoft to develop a machine learning tool that will automate species identification. The researchers also shared the GoPro footage at several outreach events and produced a short film, blog posts and a fact sheet, which helped inform the public about the project and results.