Looking Underwater to Uncover the Marine Environment of Shellfish Aquaculture 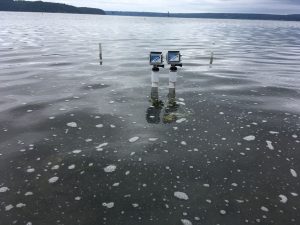 Shellfish growers spend countless hours on the tideflats each year to produce sustainable seafood for everyone to enjoy. All of this time out on the tideflats gives growers an extensive understanding of the environment around their farms, including the other organisms that live there. But their eyes can only take in what goes on above the water—and many have often wondered what goes on underneath the surface. This inspired one grower to try to put waterproof cameras on their farm. After the grower approached NOAA about the idea, an exciting new project was brought to life.

Through a Washington Sea Grant-funded project, researchers from The Nature Conservancy and NOAA partnered with shellfish growers to study the ecological role of the shellfish aquaculture habitat compared to the natural habitat. Researchers used waterproof GoPro cameras to study the presence of species on shellfish farms versus natural habitats at high tide. This project is an important step in understanding the impacts and benefits of shellfish farms on the ecosystem within Puget Sound.  The waters of Puget Sound are home to a large diversity of marine life, with each region supporting varying degrees of diversity. Because of this, shellfish farms in one area of the Sound may have different species than farms in other regions.

Due to their initiative and interest in better understanding aquaculture, shellfish growers are natural partners for working on these types of scientific questions — and so the research team made it a priority to engage with growers from the beginning. “We held small workshops at shellfish conferences to gauge interest from other growers,” Molly Bogeberg, the project lead from the Nature Conservancy, said. “From there, more growers joined the study.” The growers who participated were instrumental in helping the project move forward, because they guided the researchers around their farms, helped to determine the best tides for the study to take place, and helped with deploying and retrieving the cameras.

Many farmers already have a deep sense of connection with the environment around them. “This is my quiet place. I come out here, and I can work, and I can think about our ancestors,” Marlin Holden, a shellfish grower from the Jamestown S’Klallam Tribe, said. Collaborating on this project gave them the opportunity to dig even deeper. “We have a good sense of what’s happening out there at low tide,” said Lissa Monberg of the Hamma Hamma Oyster Company. Some growers dive to learn more about their farms at high tide, but there is still a lot of information they do not know about their farms when tides are high. “It’s really awesome to have those cameras out there so that we can get a better sense of how these animals are using the gear at high tide,” Monberg said. 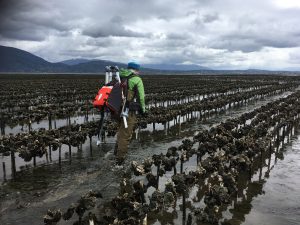 Getting ready to set up cameras on a shellfish farm. Photo: Molly Bogebert

This study occurred in three different regions around Puget Sound, where the GoPro cameras were deployed. They targeted shellfish beds in three different types of growing areas, as well as in unfarmed habitats. Once in place, the cameras begin recording at high tide and capture videos of the species that interact with the shellfish farms. “Documenting with GoPros will help other people understand how diverse and how dynamic our beaches are,” said Shina Wysocki, owner of Chelsea Farms. More than 400 hours of video was collected, reviewed and analyzed to quantify fish and crab use on the sites. “With GoPro cameras and the new technology, this has opened a door to allow us to collect data that we wouldn’t have been able to collect even a couple of years ago,” Beth Sanderson, a research scientist with NOAA Fisheries, explained.

One of the biggest challenges the researchers faced was getting footage with enough visibility in the water. “Our Puget Sound waters can be full of plankton and sediment that can sometimes make it hard to get good footage on the cameras,” Bogeberg said. “However, when you get the right tide, sunlight, and clear waters, the footage is pretty incredible!”

The results showed that the fish and crab species interaction with the shellfish aquaculture farms varied across three study regions in Puget Sound (North Sound, South Sound, and Hood Canal). Hood Canal did not show any changes in diversity with the presence of the aquaculture, while there was an increase in diversity in the North Sound sites, and a decrease in diversity in the south Sound sites. However, more studies will need to be done to better understand the interactions between fish and crab species and shellfish farms. Bogeberg said that, throughout the project, “it was really neat to see how the whole process works from raising seed in hatcheries to working midnight low tides in the winter to harvest. The tidelands are full of activity with harvesters working through the night to bring shellfish to our tables.”

Now, with the ability to look below the water, it will be possible to look towards the future of shellfish farming in Washington with greater focus.