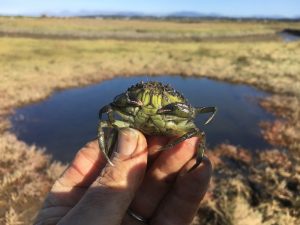 Join Padilla Bay’s research and stewardship staff for an hour of virtual investigation. In this first episode of a series, Madi McKay will take you inside the world of European Green Crab research and monitoring at PBNERR with videos, interviews, and current data.

The Padilla Bay National Estuarine Research Reserve is a key partner in the regional efforts to manage European green crabs. Staff at the reserve have been actively on the lookout for green crab since the early 2000’s and helped make one of the first detections of a green crab along Washington’s inland shorelines in 2016. Since that time, in addition to supporting several monitoring sites in the Crab Team early detection network, staff at Padilla Bay continue to trap extensively in an effort to get out ahead of the invasion.

This year, four green crabs have been captured in Padilla Bay – the first since 2017. Learn about the reserve’s efforts to trap for green crab, recent findings, and what plans are for the future.

Register below and you will be emailed a login link.