Anyone who’s crossed a ridge above a noisy roadway knows that conditions on the ground can affect the way sound travels through the air. We site our houses and erect noise buffers accordingly. Remarkably, however, those who build in the water have long ignored topography and other seabed factors when they calculate the spread of sound. 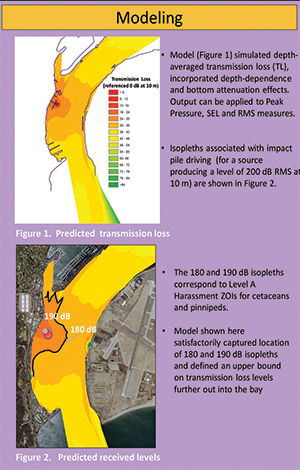 Underwater noise is a very big deal for operations such as Washington State Ferries and the U.S. Navy, with a lot of piers to build and maintain. And underwater construction — in particular, pile driving — makes a lot of noise. Accounting for that noise is critical, says Mitchell Perdue, a senior biologist with the Naval Facilities Engineering Command Southwest, who monitors the acoustics at a major pier renovation in San Diego Bay: “When you work underwater you deal with two federal agencies and three different statutes” regarding noise and marine life.

These rules require that work cease when dolphins, seals and other protected animals enter “zones of influence” within which noise reaches levels that can harm them. These zones have traditionally been calculated according to a simple “practical spreading model” that considers only distance from the source, not other factors that may further attenuate sound as it travels through shallow bays and estuaries. This can lead to gross inefficiencies: zones drawn too broadly, monitors placed where they aren’t needed, work suspended when it needn’t be.

Peter Dahl, a senior principal engineer at UW’s Applied Physics Laboratory (APL) and professor of mechanical engineering specializing in underwater acoustics, set out to change that by developing a better model for underwater sound propagation, taking into account bathymetry and sediment composition, not simply distance. In 2010 the Washington State Department of Transportation provided funding and a testbed when it sank two test pilings preparatory to renovating its Port Townsend ferry dock. When WSDOT sank more pilings in 2013, Dahl and doctoral student Dara Farrell returned, with support from Washington Sea Grant, to test and refine the model. Their findings, published last year in the Journal of the Acoustical Society of America, showed that bathymetric refraction — the deflection offshore of sound waves by seabed terrain — can markedly attenuate noise transmission, particularly when sound travels along a sloping shore.

Meanwhile, the Navy faced a sticky regulatory challenge. It needed to rebuild its hundred-year-old fueling pier in San Diego Bay, a critical facility for the Pacific Fleet. Delays or unnecessary measures prompted by acoustical uncertainties would be costly, explains Perdue: “These are hundred-million-dollar projects. Our goal was to avoid having to attenuate the pile-driving sound with a bubble curtain” — a wall of bubbles generated to muffle vibrations. “That could potentially double the cost of the project.”

The Navy used Dahl’s transmission-loss model to set baseline zones of influence and draft the “incidental harassment authorization” it sought and received from NOAA Fisheries, setting noise limits for its San Diego project. The Navy is also using a hand-held device called the Underwater Sound Level Meter that Dahl developed with initial WSDOT and APL funding. This device rapidly measures and analyzes both ambient and project-generated noise. “It allows us to make real-time acoustic measurements instead of having to stand down and wait for post-recording analysis,” says Perdue — another big savings. 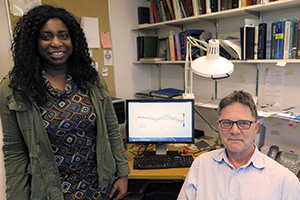 Farrell and Dahl probe the complexities of sound in shallow water.

In 2013 and 2014, with support from WSG, Farrell measured actual noise around the pier site. By analyzing their differing frequency contents, she distinguished pile-driving noise from the high ambient noise levels produced by San Diego Bay’s thousands of pleasure boats. And she verified that the actual levels matched what the model predicted within the critical zone of influence. “The farther out we got, after about 1,000 meters, the model was less and less representative of measured levels,” she says. “But by then you’re out in the open ocean.”

Dahl and Farrell aren’t the only ones modeling underwater sound propagation to accommodate construction while protecting wildlife; their German and British counterparts are evaluating such projects as offshore wind farms in the North Sea. But those efforts tend to be in deeper, more open waters. “Where we work, in shallower water closer to shore, is different,” says Dahl.

That’s made him the go-to guy in an esoteric but increasingly important field. “We have scientists from Naval Facilities Engineering Command [on the East Coast] coming here to train,” says Perdue. “They have in-water construction projects coming up, and they’re looking to approach them the same way we have.”

One key to this success, adds Perdue, is Dahl’s credibility: “Peter’s kind of writing the book on pile-driving acoustics. The regulatory agencies trust his results. That’s gold.”