Rain gardens are popping up everywhere around Puget Sound. They deliver myriad benefits, from reducing pollution and preventing floods to beautifying yards and eliminating the high cost of traditional piping and drainage systems. Now, thanks to research partly funded by Washington Sea Grant at Washington State University’s (WSU) Puyallup Research and Extension Center, we can add one more perk to the list: Rain gardens can save salmon. 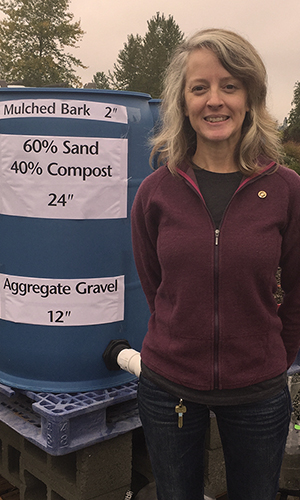 Jen McIntyre with a simple but effective bioretention system.

Lead investigator John Stark, aquatic ecotoxicologist Jen McIntyre and their colleagues studied the impacts of urban stormwater runoff on Puget Sound’s declining coho salmon runs. This runoff is a lethal brew. It carries toxics such as heavy metals and petroleum byproducts from highways, parking lots and other impervious surfaces into the creeks where salmon spawn, incubate and rear. Stormwater runoff, the researchers hypothesized, might well explain why more than half the coho returning to urban streams each year die before they can spawn. The researchers sought inexpensive, practical ways to remove these pollutants and reduce their impacts. The salmon would be the ultimate test.

The scientists ran polluted water, including runoff from a busy urban highway in Seattle, through a rain garden-like filtration system — barrels layered with gravel, sand, compost and bark — and found a big improvement. Untreated water killed all the exposed fish within 24 hours, but all the fish that received the soil-filtered runoff survived. The clear evidence from this research showing effectiveness of bioretention systems in protecting salmon has already inspired an increased use of low-impact development methods in local construction projects. Tableau, a Seattle software firm, recently redesigned their new campus to incorporate filtration of runoff from nearby Highway 99, benefiting the entire community.

More recently, Stark, McIntyre and their team set out to test their methods with the Department of Ecology’s revised soil recommendations for bioretention systems in Western Washington. These suggest an even simpler 60:40 mix — 60 percent sand and 40 percent compost. Their trials validated the bioretentive effectiveness of the 60:40 mix, leading them to the project’s later phases.

Again, the results, published in two recent papers, were compelling. They showed that filtering through the 60:40 mix is also effective at preventing the abnormal swimming patterns and other behaviors that adult coho salmon affected by urban runoff exhibit before dying. Additionally, they found that this mix eliminated the mortality caused by the polycyclic aromatic hydrocarbons in runoff from the coal-tar sealcoat commonly applied to roads.

These studies suggest that simple, inexpensive green stormwater infrastructure, similar to the rain gardens already gaining popularity, can improve water quality and help protect fish populations. If innovations such as this can be incorporated into transportation projects around the urban watershed, wild salmon and humans may have a better chance at coexistence.

Such leaner, greener alternatives are already appearing around Seattle. The city has completed six “natural drainage” projects that have reduced toxic impacts on affected creeks by 74 to 99 percent. Broadview, Capitol Hill and the Loyal Heights area of Ballard are among the local sites currently undertaking similar bioretention projects.

Phase four of the WSU project, scheduled for this spring, will turn to a different biotic sphere. Rather than testing salmon, the scientists will analyze bioretention’s effectiveness at protecting invertebrates such as mayflies, an important fish food. But even before the bug collecting began, McIntyre and Stark were heading to Washington, D.C., to share their findings, which have received extensive national media coverage, with Congress.

“There is no question that urban stormwater runoff contributes significantly to the degradation of aquatic habitats,” McIntyre said, rehearsing what she would tell congressional members. “Our research shows that simple green infrastructure can go a long way toward protecting these important ecosystems.” 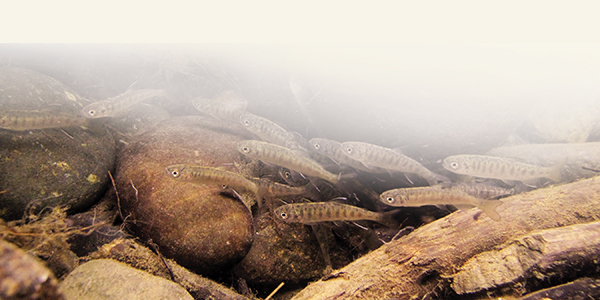