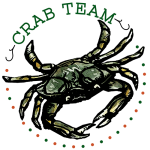 Don’t be fooled by the European green crab’s humble appearance. These small shore crab travel the world, silently invading coastal communities far outside their native range. They disperse easily, riding currents and hitching rides in ships’ ballast water as tiny larvae and hiding in shipments of live shellfish as adults. Voracious, highly adaptable omnivores, they devour marine organisms and vegetation alike, outcompeting native crab populations for food and shelter. They’ve been blamed for losses of eelgrass and soft-shell clams on the East Coast and (though evidence is slight) of Manila clams in California.

Surprisingly, this cosmopolitan species hasn’t been detected in Washington’s inland waters, which offer ideal habitat. Scientists believe green crab reached Washington’s and British Columbia’s outer coasts with the help of El Niño-driven currents in 1997–98; they persist there to this day. The crab entered Willapa Bay and Grays Harbor but did not proliferate; during non-Niño years the prevailing currents sweep their larvae out to sea, leaving only small remnant populations.

Meanwhile, green crab continue to thrive in the muddy lagoons and salt marshes along the outer coast of Vancouver Island, whose deeply cut channels and sloughing banks are strikingly similar to Puget Sound’s. In 2012, a new population was discovered in Sooke Harbour Inlet, near Victoria, B.C. — inside the Strait of Juan de Fuca and one step closer to Puget Sound’s valuable shellfish beds and sensitive ecosystems. Now another El Niño warms Northwest waters, once again favoring green crab reproduction and survival. Uncontrolled, green crab could threaten economically and ecologically significant clams and Dungeness crab. 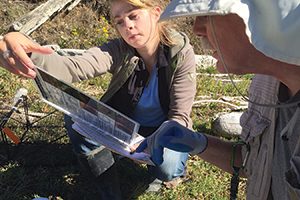 The Sooke Harbour discovery sounded the alarm. In response, Washington Sea Grant, together with the Washington Department of Fish & Wildlife and other partners, has launched a carefully targeted monitoring effort to catch infestations before they become problems. Green crab are extremely difficult to control; there are no cases of successful eradication. But detecting them early enough can help minimize their effects. “If we don’t know where they are, then they have a much longer time frame to multiply and spread,” says project lead Jeff Adams, WSG’s marine ecologist.

Last summer, trained volunteers participated in a trial run, setting baited traps at seven Salish Sea sites identified by UW scientists as potential green crab habitat, including Iverson Spit on Camano Island; Penn Cove, Deer Lagoon and Race Lagoon along Whidbey Island; Kala Lagoon at Port Townsend; and Butterball Cove and Kennedy Creek near Olympia. The volunteers assessed their catches and combed the shore for molted green crab shells. This pilot uncovered no green crabs, but Adams wasn’t disappointed: “We would be perfectly happy if we never found a green crab,” he says.

The project will provide not only early detection but a long-term dataset on valuable but understudied habitats. Volunteers record the numbers, sex ratios and sizes of all the organisms trapped, useful data that are scarce even for common species such as shore crab and sculpin. And should green crab show up in the traps, the data will provide critical before-and- after snapshots, showing how infestation affects these habitats.

Since this year’s monitoring kicked off in April, the Crab Team has kept 22 sites under surveillance, with three more sites targeted for monitoring before the summer is out. A UW capstone student helped build an evaluation component into the volunteer training protocol to track its effectiveness and determine how to help volunteers feel successful in their work. If retention is any indication of success, the Crab Team is off to a good start: project coordinator Emily Grason reports that nearly all the volunteers will returned in 2016. 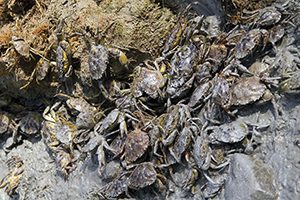 In conjunction with the monitoring, Grason explains that by increasing public awareness, the green crab team will “cast a wider net” around the green crab threat. Its outreach component targets kayakers, boaters and others who frequent areas where green crab may appear.

Last year, for the first time in five years, a survey done annually in Willapa Bay yielded green crab—eight of them. This doesn’t surprise some researchers, considering this year’s strong El Niño and the persistence of low-density populations on the outer Northwest coast for the past 17 years. They wonder whether, together with the Sooke Harbor discovery, it foretells more infestations to come. Still, Grason remains optimistic: “This year could be something of a litmus test. If we still don’t see them after such a strong El Niño, we may not be facing doomsday.”

She hopes the Crab Team will also raise awareness, build support, perhaps even attract more resources and prompt stronger regulations for invasive species prevention. “There is meaning behind this work beyond academic research,” Grason says. “In terms of implementing change in the world, we hope that we can garner political will for management.” Meanwhile, citizen monitors are keeping their eyes on the beach and their boots in the mud.