“This is a boating mecca,” says Washington Sea Grant (WSG) boating specialist Aaron Barnett as he surveys the Friday Harbor Marina during a warm summer day in late July. An ever-shifting array of ferries, whale watching boats, yachts, fishing vessels, sailboats, dinghies and kayaks pull in and out throughout the day. Families of all ages roam the wooden docks as gulls call to each other and the pungent smell of low tide mixes with wafts of diesel fuel. This bustling activity is why Barnett sees Friday Harbor, located in Washington’s San Juan Islands, as a perfect place to talk with boaters about the importance of preventing small oil spills and sewage discharge and to provide them with free resources to keep Puget Sound’s waters clean.

Spilling oil or boater sewage introduces pollution into our waters that can sicken humans and pets; contaminate shellfish, crabs and salmon; and undermine jobs and recreational pursuits that depend on clean water. Even small spills accumulate into big numbers: in 2017, 1,331 gallons of diesel, gas, oil and hydraulic fluid were spilled into Washington waters from small vessels.

To educate boaters about keeping pollution out of Washington’s waters, Barnett and WSG coastal policy specialist Bridget Trosin spend much of their time traveling around the state distributing free supplies to boaters and marinas. Their efforts are made possible through our partners: Washington Department of Ecology (managers of the broader spills program) and Washington State Parks (managers of the state boating program), and Puget Soundkeeper (managers of the Clean Marina program).

The small oil spill kits consist of a small absorbent pillow that can be placed alongside bilge pumps to prevent oily discharge from entering the water, a pair of nitrile gloves and a trash bag for disposing oily pads. Fuel bibs designed with a hole

in the middle for the fuel nozzle are also available to make it easier to catch drips when filling up at the fuel dock. “We had a little bit of a spill filling up recently,” boater Doug Looker says as he picks up a few fuel bibs during a stop in Friday Harbor. “If we had had something like this, we could have prevented it.” 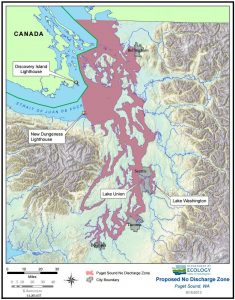 No Discharge Zone map of Puget Sound. Image courtesy of the WA Dept. of Ecology.

As of May 2018, Puget Sound was designated a No Discharge Zone, meaning that it is illegal to discharge raw sewage in inland waters and within three miles of the coast. To help boaters comply with these rules and offload their sewage, Barnett and Trosin also distribute specialized pumpout adapters that allow the pumpout hose to be securely attached during pumping, minimizing the potential for sewage spills. The adapter is one of the most popular items picked up at marinas and boating events. “These things are great,” says boater Garner Miller; “It just screws into your deck fitting so you don’t have to hold it, and there’s no mess.” Barnett also collaborated with other Sea Grant programs to develop an interactive online map that helps boaters locate one of more than 150 free pumpout stations at marinas around the state, including the most recent installation at West Beach Resort on the north side of Orcas Island.

These efforts seem to be paying off. In 2017 alone, 10.6 million gallons of sewage were prevented from being dumped into Puget Sound. After all, the best solution to pollution is to keep it out of the water in the first place.