The shaking started soon after everyone had gone to sleep. Houses collapsed, coastal shorelines sank, and those who did not immediately run for higher ground were likely killed by the onslaught of water that roared through coastal Washington all the way to Hood Canal. 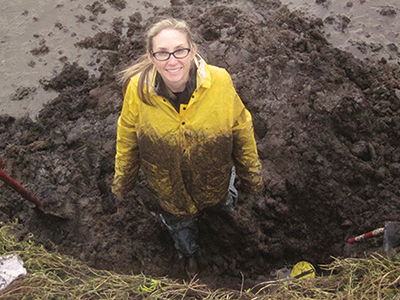 Scientist Carrie Garrison-Laney in the field.

The 1700 Cascadia tsunami was the last big event of its kind to hit the Pacific Northwest. Scientists such as Carrie Garrison-Laney, a coastal hazards specialist for Washington Sea Grant and liaison to the Pacific Marine Environmental Laboratory, pieced together the story of this and other past tsunamis using long-buried sediments that were left behind by the powerful waves. Garrison-Laney combs bays and inlets looking for evidence to shed light on how destructive past tsunamis may have been so she can share her findings with coastal residents and emergency managers — and help them better prepare for future events.

The tsunami of 1700 was generated by an underwater earthquake along the Cascadia fault, a 620-mile-long geologic feature offshore British Columbia, Washington, Oregon and northern California, in which the dense crust of the Juan de Fuca plate is being thrust under the North American continental plate. The fault is quiet right now, with no earthquakes, meaning the plates are “locked.” But eventually, “The forces pushing the plates together will overcome the forces locking them together, creating an earthquake,” Garrison-Laney says. “When this happens, coastal areas will subside, and part of the ocean floor will get pushed up and displace the overlying water.”

Of course, that water has to go somewhere. “It’s like being in a bathtub, and water sloshes around and spills out of the tub if you move quickly,” Garrison-Laney explains. In other words, a powerful tsunami will be generated, with potentially devastating impacts along the coast.

Garrison-Laney got her start as a tsunami scientist in the late 1990s when she joined her advisor at Humboldt State University to study a freshwater pond near a beach south of Crescent City, California. She was interested in earthquakes, but hadn’t thought much about tsunamis. They looked at sediment cores from the pond and were intrigued when they saw sand layers every 18 inches or so.

“We thought, ‘hmm, interesting — where did this sand come from? How did it get here?’” Garrison-Laney recalls. She examined the diatoms — tiny marine microfossils — embedded in the sand to show that the sand came from the beach and had been accompanied by a big pulse of ocean water that stayed in the pond for a time, before gradually transitioning back to freshwater. Each sand layer that she examined was an example of this cycle having repeated itself. Garrison-Laney and her colleagues could tell that it was very turbulent when the sand was deposited in the pond because there “were chunks of stuff ripped up and incorporated into the layers — sticks, pine and spruce cones, material from a landslide” that had been tossed around before getting buried in the sand. They also found traces of sand nearly a mile inland from the coastline. All of the evidence, including radiocarbon dating of the twigs, pointed towards a pattern of recurring tsunamis flowing into the pond over the last 3,000 years.

Piecing Together the Tsunami Mystery

Much of Garrison-Laney’s current work involves studying geologic evidence of tsunamis from coastal areas in the Salish Sea to determine where and when these sediments were deposited. She compares this evidence with computer models of tsunami inundation at the same locations, with the goal of reducing some of the unknowns for vulnerable coastal communities.

If you think you’re safe in Seattle, think again. As Garrison-Laney’s research suggests, the “inside waters” of Puget Sound could be within reach of Cascadia tsunamis. The area is threatened by tsunami hazards from local faults as well; in fact, the network of faults that crisscross Puget Sound between Olympia, Tacoma, Seattle and South Whidbey Island make the area one of the most vulnerable to earthquakes and tsunamis in the country. An earthquake about 1,100 years ago on the Seattle fault generated a tsunami, and computer models of this event generated waves up to 20 feet high in Elliott Bay with widespread inundation along the shoreline and in the industrial ports and low-lying areas of the Duwamish River.

Tsunami research may be fascinating, but it’s only useful when it is communicated to emergency managers and the public. To ensure that the latest information and best tsunami science is making its way to coastal communities, Garrison-Laney and partners from Washington Emergency Management Division, the Washington Geological Survey (Department of Natural Resources), and NOAA’s National Weather Service took to the road last spring in a series of public talks called The Tsunami Road Show. From Ilwaco to Port Townsend, nearly 1,000 people attended eight talks presented in four days. The partners presented a holistic message about tsunami science and research, shared the latest inundation maps for Washington, and provided concrete suggestions for how to prepare. “Even just having this information in your mind can help save your life when the big one hits,” Garrison-Laney says. 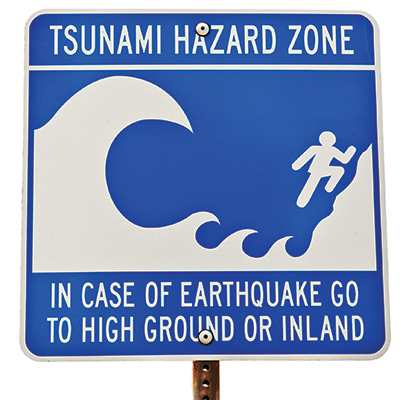 Know the fastest evacuation routes to get to high ground quickly

Work out an emergency plan for home and work

You might be on your own for a while, so think about how you will communicate with family, friends and neighbors — is there a network that you could use?

Learn to interpret messages from the U.S. Tsunami Warning System:

° Tsunami Watch: issued for any earthquake magnitude 7.5 or larger if the epicenter is in an area capable of generating a tsunami; hazards not yet known; stay tuned for more information and be prepared to act

° Tsunami Advisory: issued when a tsunami that could affect the area is imminent, expected or occurring; hazards include strong currents and waves dangerous to those in or very near the water; stay out of the water, away from beaches and waterways

° Tsunami Warning: issued when a tsunami with the potential to generate widespread inundation is imminent, expected or occurring; hazards include dangerous coastal flooding and powerful currents; move to high ground or inland

Prepare a “Go Kit” that can cover your basic needs for 14 days — this will improve your odds of survival substantially. Here’s what to include:

° Bottled water and/
or water filter