Imagine Washington’s landscape more than 100 years before the Space Needle was built. The trees stood tall from the mountains to the coastline, lush forests that promised entrepreneurial success for settlers who sought to establish roots in the Pacific Northwest by taking part in the logging industry that built the state. The area’s Douglas fir, hemlock, spruce, cedar and Ponderosa pines supplied lumber that was in great demand following the start of California’s 1848 Gold Rush and succeeding population boom along the Pacific Coast. Sawmills were built along Washington waterways to more easily transport the product. By the 1850s, over two dozen sawmills had been built along Puget Sound.

While sawmills no longer operate on the same scale, these relics of Washington’s history are still impacting local ecosystems today, including the health of Zostera marina, an eelgrass species native to Washington waters. Eelgrass is well known as an indicator of ecosystem health in the Salish Sea (which includes both Washington’s Puget Sound and the inside waters off of Vancouver, British Columbia), but eelgrass is more prosperous in some areas than others. In 2016, with funding from Washington Sea Grant (WSG), researchers David Shull, Sylvia Yang and Mike Adamczyk from Western Washington University set out to understand why, with the hypothesis that higher concentrations of sulfide in the water is partly to blame for the reduction in eelgrass in some areas.

After they embarked on this project, the researchers began to wonder: could the higher levels of sulfide found in some areas be a legacy of Washington’s logging history? Historically, Washington’s sawmills released wood waste into the nearby Salish Sea. This rapid increase in organic matter fueled bacteria in the sediment to break down sulfate into hydrogen sulfide, making these locations sulfide-rich. “We thought perhaps sulfide, which is toxic to eelgrass and can occur in high concentrations in these areas, might be part of the story,” Shull says. 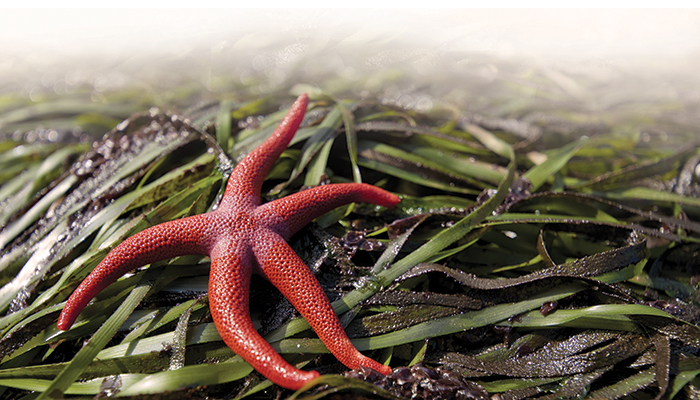 To study this effect, the researchers collected eelgrass from eight locations around Puget Sound and exposed them to varying levels of sulfides. Sulfide concentrations were manipulated in a number of ways, one of which included adding wood waste to the eelgrass tanks. “This mimicked places where there appears to be a strong effect of sulfide on eelgrass. This includes near historic pulp and paper mills, environments in which it’s apparent that eelgrass doesn’t grow very well,” Shull explains.

In the field, the team also found a variable distribution of sulfide concentrations in the sediment surrounding the eelgrass plant. With varying sulfide concentrations, it became difficult to take consistent sulfide measurements using the traditional methods, so the research team created their own tool to accomplish the task: their solution was the diffusive gradient thin-film (DGT) sensor. They layered thin sheets of a special kind of gel on top of each other, “So that you have what almost looks like a TV screen,” Shull describes. Eventually, the result is a grey-scale gradient that gives an indication of the concentration of sulfide in the soil.

The results of this research could have important restoration implications; for example, the sulfide-resilient eelgrass from Dumas Bay holds promise to be successful stock to replant areas near historic sawmills. “Not all eelgrass populations are the same in the Salish Sea,” Yang says. Which is why WSG funded a new project this year to research the genetic population structure of eelgrass and to study and how distinct eelgrass populations respond to environmental stressors. Getting a better understanding of these site-to-site differences will help fine-tune future restoration efforts.