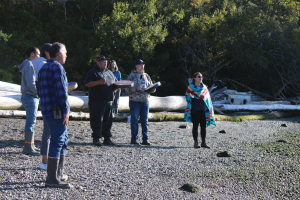 La Conner, Wash. – In the 1990s, members of the Swinomish Indian Tribal Community began to notice that they weren’t finding as many native littleneck clams on their traditional harvest sites. With climate change and ocean acidification—issues that particularly affect shellfish—this trend was likely to worsen. The Tribe realized that these and other changes could continue to affect their access to traditional foods, cultural practices and, ultimately, the well-being of their members and community. In response, Swinomish began to explore the potential to create greater ecological and socio-cultural resilience through reviving clam gardening, an Indigenous mariculture practice that is at least 3,500 years old. Now, the Tribe has received funding from the NOAA Saltonstall-Kennedy Competitive Grants Program and from the Northwest Climate Adaptation Science Center to build the first modern-day clam garden in the U.S.

“We have maintained our relationships with this territory since time immemorial—relationships with the land, the water, the sea, and everything that lives along with us. We are thankful to receive this funding that will enable us to continue to work with the land and the water as we restore our ancient practices,” says Steve Edwards, Chairman and member of the Swinomish Indian Tribal Community.

Clam gardening consists of a variety of habitat enhancement techniques and maintenance practices that sustainably increase shellfish production and species diversity. Historically, clam gardens were typically created by constructing a rock wall in the intertidal zone, which over time formed a terrace and expanded optimal clam habitat.

“Ecological studies have documented significantly higher densities of native littleneck and butter clams in historic clam gardens compared to unmodified beaches. Clam gardens also increase the abundance of other species, from sea cucumbers to seaweeds,” says Courtney Greiner, the marine ecologist for Swinomish and lead on this project. “There’s so much life associated with these structures that some communities call them ‘sea gardens.” Additionally, clam gardens are adaptable to sea level rise and have a high concentration of shell fragments that can improve habitat conditions as oceans acidify.

“Our way of life changed drastically in a short amount of time, and our people have experienced the impacts of that,” says Alana Quintasket, a Swinomish Indian Tribal Community senator. “Work like revitalizing clam gardening is one of the best things we could be doing during this time because our people need it more than ever. And our relatives of the land and sea also need it more than ever. They need us to return to them—so that they can thrive and we can also thrive.” Cultivating and harvesting clams and other marine foods have been central to the way of life for Coast Salish Indigenous peoples since time immemorial. However, forces including colonialism, racism and shoreline development have threatened these practices, with impacts to communities and coastal landscapes. Many of the hundreds of clam gardens that once existed along the coasts from modern-day Alaska to Washington eventually fell fallow.

Much of the preparation for building this clam garden has already been accomplished. Swinomish selected a site based on community priorities and ecological and social criteria. The Tribe’s Fisheries Department and Community Environmental Health Program partnered with Washington Sea Grant and received guidance from Indigenous knowledge-holders and clam garden researchers to help determine the best site to build the clam garden by identifying where the ecological and socio-cultural benefits will be optimized. To do this, they first created a shortlist of possible locations with the appropriate environmental conditions, such as current flow and water quality. Then, they worked with Swinomish community members to determine the cultural benefits that are most important to them—such as ceremonial subsistence harvests and teaching the younger generation traditional practices— and which of the short-listed sites could maximize these benefits.

“The Swinomish Indian Tribal Community demonstrated a model to integrate social and ecological information with Indigenous knowledge,” says Melissa Poe, a collaborating social scientist at Washington Sea Grant. “This is a practical and transferable tool for other place-based restoration decisions that centers community needs, priorities and leadership.”

The Tribe has now applied for the appropriate permits to build the clam garden. Pending permit approval, these new funding sources will be used to construct the clam garden wall during community-led events. The funding will also be used to collect before-and-after survey data at the clam garden site. “This is an important opportunity to show that our long-standing Indigenous knowledge can be useful in protecting our first foods against new impacts such as climate change,” says Joe Williams, the shellfish community liaison for Swinomish.

The Swinomish Indian Tribal Community is a Federally recognized Indian Tribe with more than 1,000 members. Swinomish is a legal successor to aboriginal bands that signed the 1855 Treaty of Point Elliott. Its reservation is located 65 miles North of Seattle, Washington on Fidalgo Island.

For further information, contact Courtney Greiner at cgreiner@swinomish.nsn.us or 360/333-0016.