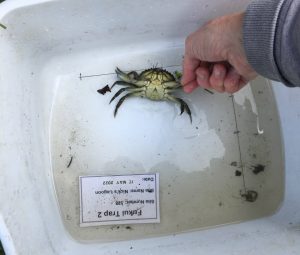 A male European green crab captured near Seabeck in Hood Canal on May 17, 2022.

OLYMPIA – The Washington Department of Fish and Wildlife (WDFW) has received confirmation that volunteers with Washington Sea Grant have captured a male European green crab in Nick’s Lagoon near Seabeck in Kitsap County. This is the first detection of European green crabs in Hood Canal, and the furthest south that these invasive crabs have been confirmed in the Salish Sea to date.

The European green crab (Carcinus maenas) is a globally damaging invasive species that poses a threat to native shellfish, eelgrass, and estuary habitat critical for salmon and many other species.

Washington Sea Grant’s “Crab Team” is tasked by the Washington Department of Fish and Wildlife (WDFW) with early detection monitoring for European green crabs. The Crab Team’s 55 site network in the Salish Sea is monitored by local volunteers and partner staff with federal and state agencies and tribes.

“Based on its size, this small crab arrived at this site just last year which really demonstrates the value of the early detection network in action” Grason said. “This group of steadfast volunteers has never missed a month in the mud, and they are literally our eyes in areas managers don’t always have the capacity to monitor regularly.”

WDFW will be conducting rapid response trapping to understand the scope of green crab presence and attempt to locally eradicate green crabs before they can take hold in the Seabeck area. Building on Crab Team early detection protocols, which deploy a small number of traps and monitor sites repeatedly, rapid response efforts will scale up trapping in the area over the course of several days, including the identification of additional nearby sites for expanded trapping.

Area residents, anglers, and others are asked not to tamper with European green crab traps, which are often deployed in shallow areas exposed at low tide and are typically identified with a bright orange buoy and an official tag or permit.

WDFW is in the process of ramping up the statewide European green crab emergency management program, including developing cooperative agreements with local entities to support a broad range of green crab management actions including monitoring and rapid response efforts.

“Washington’s European green crab management efforts have really ramped up this year with Governor Inslee issuing a statewide emergency proclamation and the legislature authorizing new emergency funding resources,” said Pleus. “This detection in Hood Canal by community scientists and the rapid response of numerous traps and other equipment by WDFW exemplifies the collaborative approach we are taking to control these invasive crabs and prevent them from harming environmental, economic, and cultural resources.”

If a member of the public finds a suspected European green crab or its shell in Washington, they are asked to take a picture and report it as soon as possible. WDFW is not asking the public to keep or kill suspected green crabs because they can be mistaken identification of native crabs. A crab identification guide is available online.

European green crab are classified as a Prohibited Level 1 Invasive Species in Washington, meaning they may not be possessed, introduced on or into a water body or property, or trafficked, without department authorization, a permit, or as otherwise provided by rule. Early detection monitoring and other trapping efforts like those led by Washington Sea Grant are conducted under permits from WDFW and federal agencies.

More information and regular updates are available at: wdfw.wa.gov/species-habitats/invasive/carcinus-maenas

The Washington Department of Fish and Wildlife works to preserve, protect and perpetuate fish, wildlife and ecosystems while providing sustainable fish and wildlife recreational and commercial opportunities.

Washington Sea Grant, based at the University of Washington, provides statewide research, outreach and education services addressing the challenges facing our ocean and coasts. The National Sea Grant College Program is part of the National Oceanic and Atmospheric Administration, U.S. Department of Commerce.
wsg.uw.edu