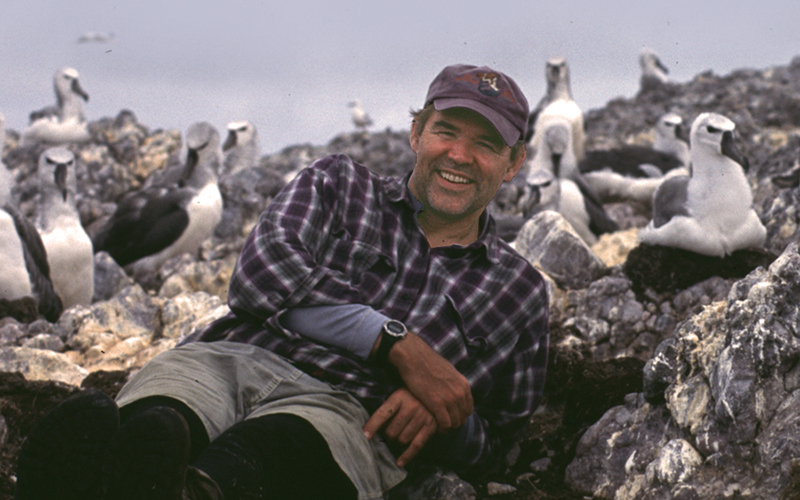 “I’ve never had an ornithology class in my life,” Ed Melvin confides on a sunny afternoon sitting by Seattle’s Portage Bay. For anyone familiar with Melvin’s work, this may come as a surprise. Melvin spent the bulk of his career saving seabirds.

Each year, hundreds of thousands of seabirds, including many endangered albatrosses and petrels, are trapped and drowned in commercial fishing gear. As a marine fisheries scientist at Washington Sea Grant (WSG), Melvin focused on researching and implementing methods that would help prevent seabird bycatch. This work took Melvin around the world and out to the high seas. It gave him the opportunity to work with other scientists, fishermen and policymakers. It also earned him top honors from UW, the Pacific Seabird Group and NOAA, and a project he led was awarded the prestigious Presidential Migratory Bird Federal Stewardship Award in 2015.

After nearly 30 years on the WSG team, Melvin is now moving onto his next chapter: retirement. We recently talked with him about his career, including how he got started, some of the places it has taken him and how he plans to stay involved. Here’s what he had to say.

I got my master’s degree in fisheries biology at Humboldt State University. I worked in the stock room, where I handed out research equipment. This gave me the opportunity to interact with a lot of people at the university. A researcher on the California Sea Grant advisory committee suggested that I apply for a job there. I did, and so began my Sea Grant career with a fishery extension position in the counties of Monterey Bay.

I never thought I would be working on bird conservation. The first time I ran into the seabird bycatch issue was when two graduate students and I went out on a Boston Whaler in Monterey Bay, where newly immigrated fishermen were setting gillnets really close to shore—and killing tons of birds and some sea otters. I’ll never forget it. We filled the whole front of the boat with bird carcasses after watching about 20 minutes of a gillnet haul. It was a mess. (The issue was resolved when net fishing was moved further offshore.)

The Earthquake that led to Washington

I was at Candlestick Park for the World Series when the 1989 Lomo Prieta earthquake hit. We had great seats—I was sitting right by Hank Aaron (a legendary baseball player). I went to get something to eat when things started to shake a bit. Eventually, the cops drove out to the field and told people that the Oakland Bridge had collapsed. Moss Landing Labs, where I worked, was also destroyed by the earthquake. So, eventually, I ended up applying for a job at WSG.

My work at WSG started with five years in Bellingham as a fisheries extension agent. When seabird bycatch in the Salish Sea threatened to close the non-treaty sockeye fishery, I was asked to help. This led to three years of testing bycatch solutions proposed by fishermen. In the end, we demonstrated that one of the ideas gleaned from fishermen worked—and bird nets have been required in the Salish Sea gillnet fishery ever since. This was the beginning of a collaborative research model that I have since applied in multiple fisheries.

Starting in the 1990s, the bycatch of one or two endangered albatrosses a year threatened shutting down the multimillion-dollar Alaska longline fisheries for groundfish and halibut. As the problem developed, I was asked by NOAA and the industry to lead a research program to resolve the albatross bycatch issue within these fisheries. My approach was the same as with the Salish Sea gillnet fishery: collaborate with motivated fishermen to test their ideas while they were fishing.

We started the fieldwork in 1999. Eventually, we found that bird scaring lines, also called “streamer lines,” could dramatically reduce seabird mortality in Alaska’s fisheries if deployed to specifications that we developed.

Recently, I worked with collaborators to sift through 23 years’ worth of NOAA Fisheries observer data and found that streamer lines have reduced seabird bycatch rates in Alaska’s longline fisheries by 77 to 90 percent. From the time streamer lines were adopted through 2015, we estimated that well over 100,000 birds were saved, including almost 10,000 albatrosses (this study was published in Conservation Biology in January 2019).

Most endangered seabird bycatch occurs where the majority of albatross species live: in the southern hemisphere. In 2003, I took a sabbatical in Australia and continued seabird bycatch work. While there, I began meeting with the leading group working on seabird bycatch mitigation at the time: the Commission for the Conservation of Antarctic Marine Living Resources (CCAMLR), headquartered in Australia.

Later, at the Packard Foundation’s invitation I submitted a proposal to push the model we used in Alaska across cultures and hemispheres. That’s how I, and eventually my team, wound up on a couple of vessels fishing tuna on the high seas of the Southern Ocean. Most of the crew was Japanese or Indonesian and didn’t speak English, and I didn’t speak Japanese or Indonesian, so I did a lot of handwaving, drawing on pads and gesturing. Amazingly, we could communicate effectively, but it was exhausting for all involved.

These fisheries were different from the ones we worked on in Alaska. In this case, we found that you had to weight the fishing lines for the streamer lines to work. We also tested seabird bycatch during the day versus at night. Ultimately, we showed that the combination of streamer lines, weighted branchlines and night fishing could essentially get seabird bycatch down to zero. That was pretty cool because no one had done this kind of large-scale collaborative research in the high seas Asian fleets before. Many colleagues thought that it wasn’t possible.

Agreement on the Conservation of Albatrosses and Petrels

The CCAMLR meetings morphed into the Agreement on the Conservation of Albatrosses and Petrels (ACAP). Our recommendations for the Southern Hemisphere high seas fleet became ACAP’s best practice recommendation for pelagic fleets worldwide.

ACAP is an agreement between the countries that are willing to sign it, like the Paris Accords, or the Law of the Sea. The U.S. is not a member, and that has always frustrated me. There are representatives from the U.S.—from the national and international offices at the National Marine Fisheries Service, the State Department, Fish and Wildlife Service, and me. But because the U.S. has not signed the agreement, it means we don’t have the impact we could have.

In March 2019, I testified before a subcommittee of the U.S. Congress during a legislative hearing on a bill sponsored by the Audubon Society proposing that the U.S. join ACAP. The bill cleared the subcommittee and now it goes to the House. Next, there will be a Senate bill, which Cory Booker is poised to introduce.

Although retired, I’m interested in staying involved in international work. I’m keeping my role as Affiliate Professor in the UW School of Aquatic and Fishery Sciences and will keep an office here, so you haven’t heard the last from me.

This interview has been edited and condensed for clarity and flow