A Summer Boat Ride on a Mobile Sewer 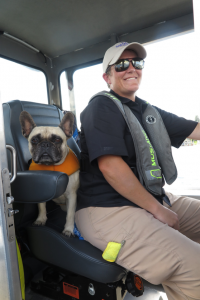 Ever dream of slipping out of your dark, air-conditioned office for an afternoon boat ride under the warm mid-summer sun? We did. Our summer daydreams became a reality when Washington Sea Grant (WSG) Communications Director MaryAnn Wagner and I got a ride on Seattle’s Portage Bay with Katie Wixom and her four-legged co-captain, Roger, one sunny July day.

In partnership with State Parks, WSG leads the Pumpout Washington outreach and education campaign for recreational boaters, and staff often find themselves around boats. But this wasn’t just any boat—and certainly not one that I ever expected to find myself on. It was a mobile pumpout boat, which provided free sewage pumpout services for recreational boaters courtesy of the Washington State Parks Department Clean Vessel Program for several years.

Steering clear of sailboats capsized by summer campers, pairs of kayakers and the occasional hungry seabird, Wixom navigated the bay to our first stop at the Seattle Yacht Club. Pulling up to a docked boat that had scheduled a pumpout, it was clear that Wixom is a pro: she knew exactly where the holding tank was and immediately kicked into gear pumping it out. A flash of yellow hose, a trained eye on the nozzle, a swift clean up, and she’s done. The whole process only took a few minutes, and before we knew it, we were off to the next dock.

Minutes later, we were greeted by a boater inquiring about an unscheduled pumpout. Wixom recognized him and happily replied, “I’ll get you all set, no problem.” She then turned to us and motioned to the customer’s boat, “He has two holding tanks. One there, and one up front. So I’ll pull around to the other side of the dock and we’ll be able to reach both.”  Although mobile services like this are no longer offered for free through the Parks program, other mobile services, such as Katie’s, are available for a fee.  And thanks to funding from the Washington State Parks Clean Vessel Program, which for several years funded  the program through the U.S. Fish & Wildlife Service via the Sport Fish Restoration and Boating Trust Fund, many boaters on Puget Sound are much more familiar with the concept of disposing of sewage properly.

Sewage in the Environment

This coming summer, with pumpout services like pump out stations placed around Puget Sound, keeping sewage out of the water has never been easier for Washington boaters. In 2018 alone, boaters diverted thousands of  gallons of sewage from Washington waters by using public pumpout stations around the state. Most of these facilities are free to use, although a few have five-dollar service fees. If going it alone, Washington Sea Grant’s free adapter kits help boaters minimize the chance of sewage spills and splatters by creating a secure attachment between the pumpout hose and a boat’s waste deck fitting.

Boaters’ commitment to clean water is definitely to be praised. Raw or untreated sewage discharged into the water has serious ramifications for human and environmental health. Bacterial and viral diseases, like the Norovirus, can spread through the water and become concentrated in shellfish. This can lead to closure of beaches and shellfish beds that Washingtonians depend on for recreation, food and jobs. It can also contribute to anoxia or dead zones as decomposing sewage depletes oxygen resources in the water.

In areas where mobile pumpout services aren’t available, boaters can head to one of over 140 public pumpout and dump stations around the state. Since it’s so important to keep sewage out of the water, it is essential that these stations are fully operational and accessible. That’s why last year WSG’s Aaron Barnett and Bridget Trosin completed a state-wide pumpout station inventory.  Trosin  said, “I think one of the coolest things we’re doing is meeting and talking with marina operators during our inventories,” said Trosin. Just like Wixom, the marina operators know their customers well and can anticipate their needs. Insight from them will help improve pumpout services and make pumping a breeze for boaters. Thanks to these efforts, this summer many more facilities around the state will be serviced and operational, offering boaters a critical public service that keeps our waters clean. 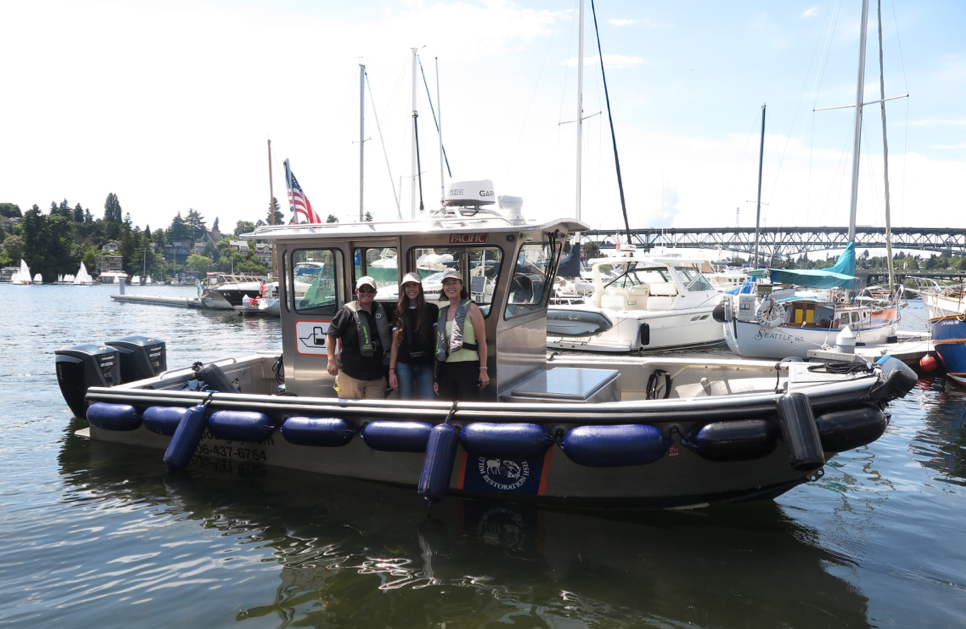 Thanks for being such great stewards of Washington waters!

Visit pumpoutwashington.org for more resources, including a map where you can find a pumpout or dump location near you.

Or contact Aaron Barnett at aaronb5@uw.edu or Bridget Trosin at bemmett@uw.edu