Who Brings Your Seafood to You? An Interview with Amy Grondin 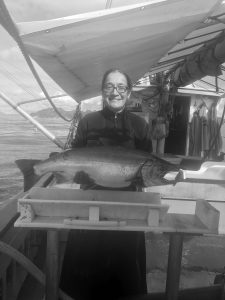 Amy Grondin is a salmon fisherman and a sustainable seafood consultant. She owns Duna Fisheries, LLC with her business partner and husband Greg Friedrichs. When they’re not fishing on F/V Arminta, their 48-foot wooden fishing boat, their home port is Port Townsend.

Amy grew up in Maine and put herself through college by bartending. After college, she moved out to Jackson Hole, WY to ski. Some of Amy’s friends had worked in canneries in Bristol Bay, working their way up from the conveyor belts (also called “slime lines”) to coveted jobs on cannery docks. It was in Jackson Hole that she got a phone call from an old friend asking if she could work on a fishing boat. “I said yes, even though I’d never fished before, and once the seasickness went away, I was hooked. It was completely without intention that I became a fisherman.”

Asked why fishing still has her hooked, Amy said: “It’s hard work, it’s long, exhausting hours, and often messy. But it’s also exciting. You’re working with beautiful animals and you see things the rest of the world doesn’t because you’re in an ocean wilderness. And I prefer to be physically exhausted than mentally exhausted, to have my own life and not be working nine to five. It’s not for everyone. You have to like being outside and you need to be flexible, curious, and have a tolerance for risk. Fishing isn’t sure money, but it always gives you something new.”

For a while, Amy and Greg worked on tenders, vessels that buy fish from fishermen on the fishing grounds and run that fish to shore so the fishermen can keep fishing. But after 15 years, they grew weary of managing crews of people. They saved up for a salmon trolling permit and leased a troller for a while before buying their hook-and-line boat 12 years ago.

Amy’s experienced her fair share of skepticism as a woman on fishing boats, especially on that first job. She recalls, “I was in my early twenties and the skipper was a friend who didn’t think twice about hiring a woman. The crew was less positive. But I grew up with three brothers, so I knew how to handle it, and I’m stubborn and I work hard. It wasn’t easy, but I’m here because of the women who came before me. They’re now in their sixties and seventies and they really wanted to be called fisherwomen because they had to work so hard to be on boats and earn respect. I don’t mind being called a fisherman, but by the time my generation came along there was a bit more opportunity for women and being called a fisherman was deemed more gender-neutral. Women in fisheries today work hard, but those who came before definitely made things easier for us. Hopefully, we’ll do the same for the next generation of women who want a life at sea.”

Besides fishing, Amy is passionate about creating sustainable, regional food systems. She is a leader regionally in sustainable fisheries outreach and does commercial fisheries outreach to anyone who cares about how food gets from boat to plate, or farm to plate. She’s keenly aware of how ocean health impacts fishermen and their livelihoods, and how ocean health is connected to the way we live on land. That’s why Amy’s a sustainable seafood consultant and vice president of the Organic Seed Alliance. “I worked in restaurants for years and that’s how I built contacts within the industry and became a trusted voice on sustainable fish. I don’t have a degree in fisheries, but I’m a fish geek with an aptitude for biology. I know if we don’t restore the habitats fish need, we won’t have fishing jobs in the future. If we take care of the fish, they’ll take care of us.” 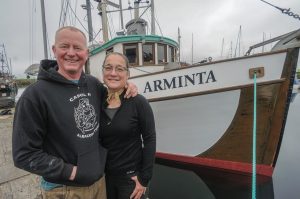 Amy with her business partner and husband Greg Friedrichs, in front of the F/V Arminta. Photo courtesy of Amy Grondin.

Amy doesn’t like the way media and big business pit farmers in eastern Washington against fishermen on the west coast, particularly on issues like dams and access to water: “That’s not the reality. We have so much more in common than not. Think about what makes people become farmers: Like fishing, farming offers no guarantees. Farmers have the same independent spirit that fishermen have. We should, and can, find common ground so the whole state can prosper. The better we work together, the better off we all will be.”

Last year, Amy advocated for stakeholder forums that would bring farmers, fishermen and others together. She says, “Our state legislature voted to fund two years of Governor Inslee’s Lower Snake River Stakeholder Process. The first meetings happened this year but it was a brief tour of only three cities, and each stop had standing room only attendance. That’s how important the issue of the lower Snake River dams is. People’s livelihoods depend on getting it right.”

Amy wants the state to hold these forums on a bigger scale: “It’s not something we as fisherman and farmers can organize on our own because we’re too busy trying to keep our businesses running. We’re talking about creating food and job security and thriving rural communities statewide. That’s something worth investing in, especially considering that COVID-19 is teaching us the importance of being food secure on a regional scale.”

Like many fishermen, Amy and Greg have been hit hard by the pandemic. “Normally we’d fish out of Neah Bay, but because of COVID-19, the Makah Nation closed their borders. I applaud the Nation for protecting their people, but it also meant we weren’t able to fish in Washington waters this spring. Even if we’d been able to fish, we wouldn’t have had clients because our business model is selling wholesale to restaurants, and there was no demand.”

Amy and her husband only fish for six weeks in the spring, and normally the money made there would have gone to paying off repairs and maintenance, filling their 2,500-gallon fuel tank, and provisioning for a summer of fishing in Alaska. This year, they had to get ready without those funds: “Yesterday we tried to leave for Alaska and a quarter mile out our navigational system shut down. So now I’m driving to Bellingham to try to get a new system and install it before the July salmon season opens! Once we get to Alaska we’ll be in a two-week quarantine and unable to go ashore so we’ve had to stock up with as much food and water as we can. These precautions are keeping the fish processing teams healthy, but it’s making an already challenging job even harder.”

Amy and her husband are now wondering what will happen to them in the fall once the summer season is over and it’s time to sell their catch. She says, “Normally, our Alaska salmon would be frozen at sea and repackaged into 50- and 100-pound boxes that are then sold to restaurants. But with demand so low, this model will likely not work for us come September.” If Amy wanted to find new clients and sell the salmon packaged for wholesale as individual fish, she would need a scale certified for legal sales, which could cost as much as $2,000.

But Amy says that the issue is not just finding new clients. It’s also about adapting new sets of rules on a weekly and even daily basis. But she points out: “In this life you’ve got to be nimble and adaptable. You either get with it or get out. Personally, I’m trying to be ready for the next wave of change, and I still can’t imagine doing anything else. If we lose our fishermen, who will watch out for the fish?” 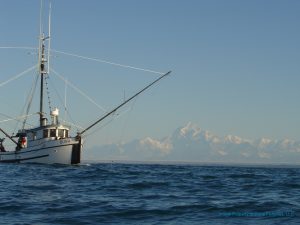 The F/V Duna, a wooden troller built in 1936 which Amy and Greg leased before switching to the F/V Arminta. Photo courtesy of Amy Grondin.