Who Brings Your Seafood to You? An Interview with Andy Mitby 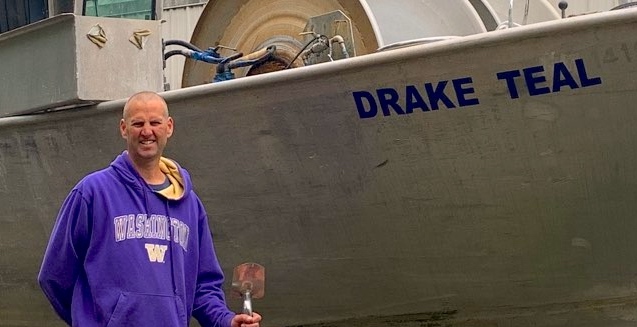 Andy Mitby of Drake Teal Fisheries is a fourth-generation fisherman and also a Husky alum, with a bachelor’s degree in marine science from the University of Washington. He says his house is now divided, now that his kids attend UW and Washington State University. Andy was interviewed just before he left Bristol Bay, Alaska for the salmon season, which he does every summer.

Andy is passionate about fishing and chose to go into the family business despite having other options. His degree in marine science helps him to better understand the bigger picture and the ins and outs of the fishing industry. But Andy comes from a multi-generational fishing family, and so the fishing bug is in his blood. As he says, “My family’s been around and at this business for quite a while. I’ve been on a boat since before I was born. I’ve been fishing since I was a kid and I’ve been going up to Bristol Bay since high school. I started running a boat when I was 16. When I got out of school, my buddy and I bought a crab boat, and we’ve been crabbing with that boat for the last 24 years.”

Andy’s grandpa started a cannery, many years back, although the family is no longer in the canning business. His dad was a teacher, but fished as well. Everyone on his mother’s side of the family were fishermen. Everyone, from cousins to aunts, all showed up for fishing. As he puts it: “All in all, everything stays within in the family.” Now Andy focuses on bringing seafood directly to the live market, and he thinks in terms of seasons: “Winter is crabbing season, spring is for clams, summer is Bristol Bay for salmon fishing, and fall is for salmon fishing here in Washington.”

When he’s crab fishing, Andy goes out every day to turn the pots. With about 250 to 300 pots deployed, every day they take the crab back to the dock and sell them. Then the next day, they get up and do it again.

Andy started in salmon fishing young and has been on the fishing boats since he was 16. Back then they used to fish for salmon from July to November, every day. But all that has changed. “Salmon fishing in Washington hasn’t been very good in recent years, so we go hunting to support ourselves. We usually hunt for ducks, deer, and elk.” 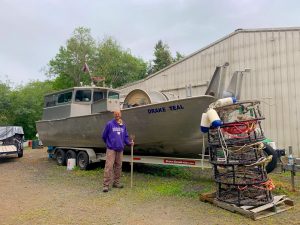 The COVID-19 pandemic has impacted Andy’s work in major ways. He says that although clam digging always gets less attention than crabbing or salmon fishing, razor clams are usually a viable fishery. However, because of the pandemic the clams are being sold for crab bait this year. Fishermen like Andy would normally sell them to restaurants as well, but the restaurant demand just isn’t there.

Andy points out that this lack of buyers during the ongoing public health crisis essentially shut down crabbing as well: “Our season got shortened by quite a bit. The pandemic kept clam digging season closed for an extra month too.” Now, fisherman like Andy who have headed to Bristol Bay have had lots of new paperwork to fill out and a new suite of safety protocols to follow. Andy said, “Everyone’s learned how to Zoom too! Honestly though, I like it. It cuts down on travel time and it’s going to change the way we do work and hold meetings together.”

Andy fishes in Bristol Bay for sockeye, which he is quick to explain has been the backbone for a lot of fishermen in Washington over the last few years. He points to Bristol Bay as an example for Washington: “In Bristol Bay, you see the biggest salmon fishery in the world, and it’s all being sustainably harvested with gillnets. Fortunately, the fishery in Bristol Bay has been a good one and we’re hoping it lasts. We’re also hoping to get some changes made to policy here in Washington so that we can have something like that here.”

When Andy thinks about the future, he also talks of his children. “I’ve got two kids: one’s a junior in college and the other’s a freshman. Both my kids have been to Alaska with me, and actually my boy fished with me last year in Alaska. But we don’t fish on weekends anymore, so it’s really hard to take the kids with us because of the shortened seasons and the limitations we have to work within.”

Although Andy’s passion for fishing persists, his does not expect his children to follow in his footsteps, which is indicative of the many pressures facing commercial fishermen in Washington today. Still, he says, “I believe my kids will be fine whatever they choose to do. My boy has got an internship this summer, so he’ll be entering the real world.” And despite his concerns, Andy continues to enjoy his work and speak proudly of his role in bringing fresh seafood to the public.