Who Brings Your Seafood to You? An Interview with Jania and Gene Panida 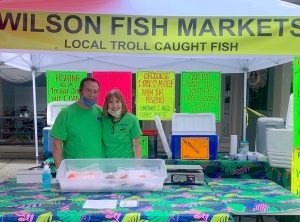 Jania’s brother Steve Wilson is a fisherman who fishes out of La Push. Years ago, Steve began selling his fish at farmer’s markets in the Seattle and Tacoma areas under the name Wilson Fish. Eventually Jania and her husband Gene took over sales side of the business. The couple have been together for over twenty years, and they travel all around the state to pick up fish direct from their fishermen partners. They sell this fish, along with Steve’s fish, at six different farmer’s markets, including Ballard, Lake Forest Park and Redmond.

Jania and Gene both believe that their family backgrounds make them the perfect pair to be selling fish at farmer’s markets. Jania and Steve’s father was a fisherman, and their family has been fishing for a long time. Jania used to go out on the boat with her father as a child, but she does not fish anymore. “I learned early on that I belong on land, but since I was in a fishing family I needed to do something to contribute. Well, I learned that I was good at sales: My brother and I love each other, but he does the fishing and I do the selling. We agreed that I’ll stay out of his boat if he stays out of my booth!”

Meanwhile, Gene came from a family of farmers. “My brothers and sisters and I were Green River valley, Filipino farmer kids. From the time that I was nine years old, I was accompanying my family to Pike’s Place Market, where we would sell our fruits and vegetables. We had a full farm. Beets, cukes, berries, you name it. That’s what we grew up doing. Later, but when I was still in school, my dad sent me to Alaska for the summer to work in canneries and then to fish. I did that for four summers and it was an adventure.”

Gene says that when he first met Steve, Steve was a teacher for the Tacoma School District. Every summer Steve would go fishing on his commercial troller. “Steve started looking for opportunities to market his fish, starting at small farmer’s markets, and when we realized how well that was doing Jania and I took over the farmer’s market sales business. We were one of the first at the farmer’s markets to sell fish one pound at a time, instead of one fish at a time.”

Jania points out that after she and Gene pick up the fish they have to break them all down and get them ready for market. “We get salmon, halibut, ling cod, and more from our commercial troller partners, and Gene and I work together to prep all this fish in advance for our clientele. Cleaning, fileting, smoking, you name it.

“We do our fish business every day of the week. It’s more than a 24/7 job. If we’re not driving to the coast to pick up fish, we’re fileting and processing them, or we’re working at a market, or we’re cleaning cases. We go from dawn to dusk. When people ask us when we’re going to have a day off, I tell them maybe November!”

Gene chimes in, “A lot of the guys we work with call themselves cowboys because they fish by themselves. They’re in dayboats and other smaller boats, so they don’t have anybody with them and they do all the work. They bring fish in every night and it’s our job to meet them and pick up their catch. For example, Jania and I got fish early yesterday and we headed to coast last night. We slept in our truck, and now we’re coming back from the coast to sell at six farmers’ markets.”

Despite all the hard work, Gene says the response they get from their customers is great motivation. “It’s satisfying to see people enjoy our food and to get such good feedback from them. We always have wild fish that we bring to our customers from ocean to table, and it’s given us a great reputation.” 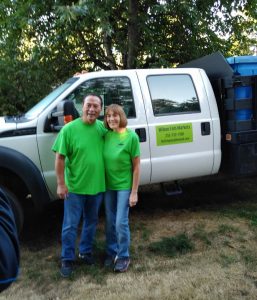 Gene and Jania in front of their truck. Photo courtesy of Jania Panida.

Like nearly everyone in the fishing industry, Jania and Gene have had to make profound changes to the way they do business due to COVID-19. When it comes to obtaining fish, Steve’s boat had been harbored for over 20 years at La Push, but because the all the Tribes along the coast had completely closed off their nations to protect their communities from the virus, that boat was no longer accessible, and a lot of places on the coast where Jania and Gene might have gone to buy fish also became off-limits. According to Gene, “Reservations run along about three quarters of the coast and they’re all completely closed off to us. We absolutely understand why the closures are in place, but it has made our work harder. We ended up starting our season out at Sekiu because it was the only place at the time that we could get to and obtain fish.”

As for sales, while people are still showing up to farmer’s markets, what’s really had an impact on Jania and Gene’s business are the controls placed on how many people can come to the markets. For instance, at the Ballard market on a nice, sunny day, Gene estimates that about 12,000 to 15,000 people would pass through the market from open to close. Now the Ballard market only lets in 80 to 100 people at a time.

Jania says that Wilson Fish Markets had to develop door-to-door sales out of necessity. “That’s brand new for us, but it’s taken off quite well because we have an established clientele. We’ve done this for about 18 years, so we do have a pretty good following. It’s been helping us to keep our head above water for now.” She points out that while sales have definitely shown a hit due to the public health crisis, “Fish don’t realize there’s a virus, and they’re still out there waiting to be caught. Our fish are considered an essential product for the market, and the people are still buying.

“We’re not real techie types, but we have a Facebook page and an email address, and since our customers know we do home delivery now they’ve been finding us online. We’re trying to develop more of an online presence, but it’s not easy when we’re already so busy.”

Initially, Gene had fought the idea of doing home delivery, thinking that it would never work. “However, our customers were really delighted when they learned we had begun offering deliveries, so it’s gone well. My brother Doug and sister-in-law Franki volunteered to do the deliveries and they do 20-40 a week, from Monday to Thursday. We’ve been quite happy with how that’s going, but it only worked because we had the right infrastructure, our long-time client base, in place.”

Ultimately, although it’s been a tough year for fishing, Jania and Gene have managed to adjust Wilson Fish Markets to the current public health crisis, and they continue to love what they do.

“Sometimes, when Jania and I are in our truck settling in for the night, we look at each other as if to ask ourselves: ‘Do we think this is fun? Do we really?’” Gene laughs. “But we do! Like the times when we’re in our truck watching the sun set into the waves. We have some great times together.”