Who Brings Your Seafood to You? An Interview with Libie Cain 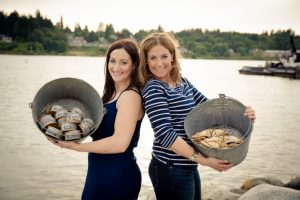 Libie Cain fishes Dungeness crab and albacore out of Westport. She grew up on Cooper Point by Evergreen State College and has an architectural degree. In fact, she was part of the team that helped build the Natural Resources Building in Olympia. She has also been a director for the Western Fishboat Owners’ Association (WFOA), a non-profit group representing about 400 family-owned albacore fishing vessels.

Libie and her best friend Teresa Reeves have their own canning business for albacore called Sassy Seafood, which processes, packs and sells the albacore caught by their husbands Chris and Shane in a true “Boat to Belly” operation. They started the business with $150 each from their boat accounts. Libie has also served on various fisheries-related committees and boards.

Libie laughs when asked about how she got into fishing. “I couldn’t beat them so I joined them. I married a Bering Sea fisherman and I didn’t know what that meant until five days after marrying him, when I dropped him off to go out to Dutch Harbor. And I didn’t even know where that was. Fishing was not my life.”

Chris and Libie have now been married 21 years. Chris has been fishing in the Bering Sea for a long time, alongside Shane, his best friend; and together with Libie and Teresa, they all look after each other. 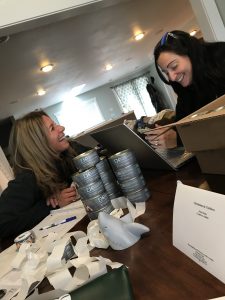 After Shane bought a small boat, Libie realized that they needed to get Chris off the Bering, so she bought her husband a boat. “Chris came home from pollock fishing not knowing what I’d done,” she said.  “I told him that he’d be able to be at home and not go out on the Bering, and that I’d do what it takes to make it work. But it’s hard. When you have your own boat it’s a different ball game. We were having a really hard time finding crew and Chris asked me, ‘Do you think you can do it?’ Mind you, my baby was three months old at the time! But I did it, and I kind of wish I never did! But ignorance is bliss. I’ve been a deckhand for him for about 16 years now.”

Eventually, Libie was chosen to serve on the Dungeness Crab Advisory Group board with about 15 other fishermen who advise the Department of Fish and Wildlife on how to support the commercial Dungeness fishery. She later served on the Tri-State Dungeness Crab Committee where the Fish and Wildlife agencies of California, Oregon, and Washington consult on issues affecting the fishery in the three-mile state waters zone. She recalls, “Now that’s heavy. You’ve got these guys who are 65-plus, and they are smart. They’re my dad’s age and they’ve done this their entire lives, so I was taught by the best. That was the best education.”

When asked about her experiences as a woman in the fishing industry, Libie says, “It is super rough. This is a guy’s world. They made this industry, they and their dads. You have to earn respect and not push your way in. You have to keep showing up, to show them you’re worthy enough. Sometimes I still struggle with it!”

Libie stresses the importance of serving on these boards and knowing the workings of fisheries management. “It’s really important for fishermen to know what the biology of their fishery is, what the policies are, or which board sets the rules. I’m glad that I can be part of that conversation.” 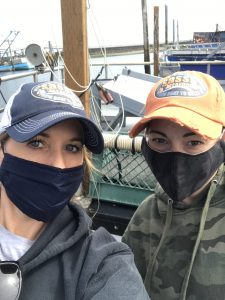 When Teresa and Libie started Sassy Seafood, they were getting only around 60 cents a pound for their albacore. “Keep in mind this albacore was beautiful, pristine, and bled perfectly. This albacore was treated better than my kids.” Libie and Teresa decided to take the fish caught by Chris and Shane, pack it, and sell it at farmer’s markets. But they didn’t just wake up the next morning and put a product on the market:

“We had to find a packer who would pack to our specifications. We had to come up with recipes and trial them. We pay more to get BPA-free cans. Our albacore fishery got MSC-certified six years ago and now we have that label on our cans. It took ten years to get to where we are now. A lot of people have tried to copy us, but they give up quickly ‘cause it’s so hard to build up a following and to earn the consumers’ trust.”

COVID-19 has had a definite impact on Libie’s livelihood. “We would still be fishing crab right now normally, but instead we had to end early. The sad thing is I’ve never seen crabs this big before in my life. The grade was perfect so it was a shame that we didn’t see much of them. At Westport, we’re the last to open for crab season, but this generally means we get a decent price for the tradeoff of having to wait. But we missed our window for Lunar New Year because it fell early and we started late, and then China got sick so we lost our live market.”

Libie is nervous about how COVID-19 might affect albacore. She normally can get a good sense of what the market’s going to be like going into the season, but the pandemic has thrown everything up in the air, adding many more variables. “For commercial fishermen, our life is enough of a variable already, right? Like two crab seasons ago, our boat caught on fire. You never think it’s going to happen to you. I was giving a talk to Washington Sea Grant about that, because the training they gave us saved our lives: me, my husband, and two other guys on boat. One is 21 and the other is 49 and he has a son.

“We had put 17 pots over the bought and I remember yelling to my husband about the burning smell. Our raw water pump had gone out, and because there was no water, the friction in the pump made it catch on fire. Once the fire got put out, the boat started sinking because of the wet exhaust. If we hadn’t had the fire training and our own knowledge to run the pumps and stay calm we would not be here. The Coast Guard was badass. Commercial fishermen, we think we’re great, but the Coast Guard’s way tougher than we are. I can’t even believe they managed to get us out. We’re recovering from it financially, but we lost our entire season.”

Libie is unsure as to what will happen next, but she remains optimistic. “I have to hope. Everyone’s hoping. There’s no rhyme or reason and you just have to go with it, which is hard to accept sometimes, like when my husband was getting ready to leave for pollock ‘B’ fishing season and I’m nine months pregnant! But it’s an interesting life.” 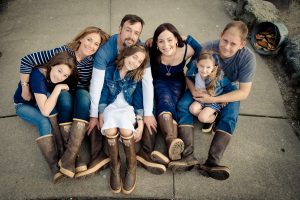 From left to right: Libie, Chris, Teresa, and Shane pose with their children. Photo by Cortney Kelley Photography.