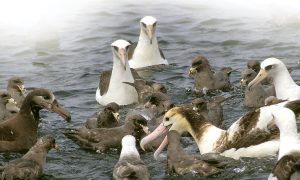 Longline fishing is a technique that involves deploying a long line with baited hooks attached at intervals behind a boat. It’s a common technique used to catch many high-value species including halibut, tuna and sablefish. However, those fish are sometimes caught along with unintended targets—known as bycatch—including about 160,000 seabirds a year globally. Along the West Coast some of the accidentally-caught birds are endangered species, such as the short-tailed albatross.

In continuation of the research that won them the 2015 Presidential Migratory Bird Federal Stewardship Award, a new paper in the Journal of Fisheries Research from Washington Sea Grant’s Marine Fisheries Scientist Ed Melvin and partners at Oregon Sea Grant, Oregon State University and NOAA Fisheries, suggests a new option that federal fishery policymakers are already considering as part of regulations to reduce the number of short-tailed albatross caught: encourage fishermen to set their lines at night.

Melvin’s work to reduce seabird bycatch from longlines began in 1999 in Alaska, which is home to the country’s biggest fisheries. He worked with fishermen to test and fine-tune a seabird avoidance technology called streamer lines (also known as bird-scaring lines), which are towed above the water behind the fishing vessel, creating a visual barrier that keeps seabirds away from the baited hooks below. In Alaska, this technique has resulted in reducing bycatch rates of albatrosses by 90 percent. Melvin and his colleagues embarked on the recently published study with the intention of finding out whether the same held true for longline fisheries down the rest of the West Coast.

It did and it didn’t. For West Coast vessels that use fishing gear similar to what is used in Alaska, streamer lines were similarly effective. But the researchers discovered that some boats in the West Coast sablefish fleet use floats to keep their bait off the seafloor—a technique that ends up rendering streamer lines less effective, because the bait sinks farther away from the vessel. “Encountering this unique gear led us in an unplanned direction,” Melvin says.

Through holding workshops in ports throughout the region, the researchers found that some fishermen vouched for fishing at night, when birds are generally less active, as a way to avoid seabird bycatch. “The fishermen invited us onto their boats and provided us with a lot of insights,” says co-author Amanda Gladics, a Coastal Fisheries Specialist with Oregon State Sea Grant.

The researchers quantified the fishermen’s anecdotal findings by sifting through 12 years of data collected by the NOAA Fisheries West Coast Groundfish Observer Program. “Not only did we find that night fishing reduced bycatch—it did so dramatically,” Melvin says. Night fishing reduced albatross bycatch by 30 times compared to setting lines during the day. What’s more, it increased the target catch by 50 percent, meaning that fishermen would have to spend less time with their hooks in the water to take home the same amount of catch.

Which isn’t to say that night fishing is a great fit for every fishery. “Alaska’s high latitude fisheries for sablefish and halibut peak in the late spring to early fall, so there’s not a lot of night to work with.” Plus, he and his colleagues found that night fishing in Alaska increases the bycatch rate of northern fulmars, which are fewer farther south. “A single ‘one size fits all’ solution won’t work for all fishermen and all boats, so developing multiple seabird avoidance options that are specific to the region is crucial,” Gladics says.

Seabird bycatch has obvious environmental implications. Gladics points out that it has economic ones, too. “Losing bait to birds can be costly, and serious economic harm can occur if excessive seabird bycatch triggers a fishery closure,” she says.

The researchers’ work could frame forthcoming policy. For example, the U.S. Fish and Wildlife Service incorporated these finding into a Biological Opinion that will soon trigger new federal regulations to protect the endangered short-tailed albatross in West Coast longline fisheries

“We’re delivering the science to the loading dock of policymakers, and they decide how to use it going forward,” Melvin says.