The Junior Olympics of Ocean Science in the Northwest

SEATTLE – More than 100 emerging young oceanographers and marine biologists from high schools around the state gathered around a giant inflatable orca at University of Washington  (UW) Fishery Sciences Building just moments before kicking off the 21st annual Orca Bowl competition this past Saturday, February 24, 2018. Thirteen teams met to vie for a slot in the National Ocean Sciences Bowl (NOSB), which will take place April 19-22, 2018 in Boulder, Colorado.This year the team from Newport High School in Bellevue, Washington won the event, with Tacoma Science and Math Institute and Ocean Research College Academy coming in second and third. The top-placed teams won hands-on marine experiences through partner organizations including Salish Sea Expeditions, Marine Science Afloat and Seattle Maritime Academy, as well as scholarship opportunities from UW. 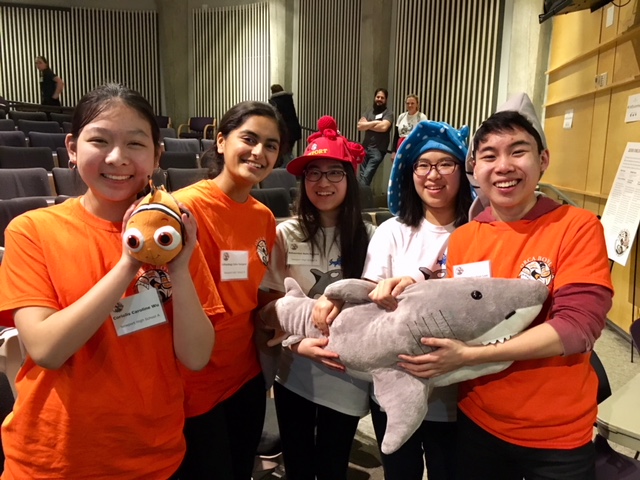 Returning team Ellensburg High Marine Biology Club took home the Megan Vogel Sportsmanship Award for their upbeat attitude and integrity throughout the competition. The entire event was high-energy and fun. As Pablo Lopez-Hiltiken said, it’s “the excitement and enthusiasm of the kids” that motivated to come back to volunteer for the fourth year running.Washington Sea Grant education specialist Maile Sullivan says the strong volunteer network is part of what makes Orca Bowl so exceptional. “Not only are these kids getting to spend the day in an academic institution that conducts real marine research, they get to interface with graduate students and ocean science professionals who are volunteering for the event.” After all, behind all the excitement is a very serious educational purpose: nurturing a new generation of marine scientists. This is vitally important as the United States and the Puget Sound maritime region contend with marine issues such as ocean acidification, climate change, fishing pressures, and other threats to the seas that sustain us.“When you’re studying for Orca Bowl, you’re studying chemistry, erosion, air quality—you’re basically studying every aspect of the important problems that face our planet,” notes Bev Mower, coach for Getchell High School’s team. Preparing for Orca Bowl meant regularly meeting after school, often for several hours, to be in top-competition shape.While there can only be one winner, it is clear from the competitors’ dedication that all of these high school students have bright futures. Ms. Mower said it best: “Somebody’s got to save our planet. These kids are brilliant.”The annual Orca Bowl competition was hosted by the UW College of the Environment and organized by Washington Sea Grant. A thank you to the local sponsors who made Orca Bowl possible: