Drone videos show height of tsunami based on UW modeling

An evacuation route in Westport, Washington gets a “tsunami eye” view 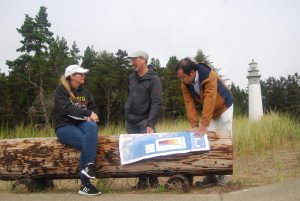 It started with a question: How can emergency managers and educators make tsunami evacuation maps and routes easier to remember for coastal communities?

“Some people are visual in terms of how they understand things,” she said.

“Being able to see video of how high a tsunami could be on a familiar landscape is a really powerful way to get people to recognize the threat and what they’re supposed to do to survive.”

Garrison-Laney set out to create a video that showed the tsunami’s perspective of approaching the shoreline.

As a member of the Cascadia Coastlines and Peoples Hazards Research (CoPes) Hub, Garrison-Laney knew that partners like Professor Daniel Abramson – with the University of Washington’s Urban Design and Planning program – supported an after-school drone club at Ocosta High School in Westport. One of the goals of the club is to give students the experience of mapping and monitoring with drones.

Abramson and Garrison-Laney worked with Ocosta High School’s Director of After School Programs Andrea Mirante to have her students help in the production of the video. Tsunami preparedness is something the students know well. Their campus has a vertical evacuation platform on top of their gymnasium – the first of its kind in North America.

“The community built it, and the students do drills on it, but many people in the community still haven’t done that. We felt that by working with the students, the school might be a good way to reach the whole community,” Abramson said. 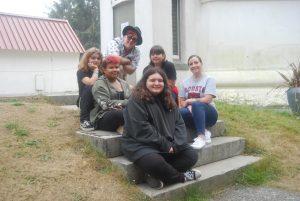 Ocosta High School’s Director of After School Programs Andrea Mirante and students who worked on the videos at the Grays Harbor Lighthouse, a tsunami assembly area.

Garrison-Laney worked with tsunami modeler Dr. Randy LeVeque, Professor Emeritus in the University of Washington’s Department of Applied Mathematics to determine the modeled height of a tsunami as it comes onshore in Westport. A magnitude 9 earthquake on the Cascadia Subduction Zone could generate a tsunami over two stories high at Ocean Avenue, along a published tsunami evacuation route that ends at the Grays Harbor Lighthouse, a tsunami assembly area.

Additionally, the team worked with the Washington Emergency Management Division (EMD) on messaging that students could use to produce their own survival simulation video. EMD provided copies of a comic called “Without Warning” to the students, and it served as a storyboard for shooting the video.

In the weeks following, students worked with the Washington Sea Grant Communications Team to edit two videos: one video that shows the “tsunami-eye view” perspective of a wave approaching the shoreline and a second video with the students that demonstrates how to evacuate from the beach to the tsunami assembly area in under 20 minutes –  the expected arrival time of a tsunami after a large offshore earthquake.

Ocosta High School showed the videos as part of the Great ShakeOut Drill – an international event on Oct. 20 that promotes earthquake and tsunami awareness and preparedness.

“We made this video for educational purposes,” Mirante said. “We are just trying to show residents and beyond what it would be like if individuals who were enjoying their day on the beach happened to find themselves in a situation where there was an earthquake and tsunami that followed.”

“We want to inform our city and help them prepare for what could be an absolutely catastrophic event by creating videos that showcase all of the evacuation routes to high ground in Westport,” Mirante said. “And at the same time be able to teach the students many different interchangeable skills with leadership and community engagement along with learning by experiencing STEAM.”

You can watch both videos on Washington Sea Grant’s YouTube page.