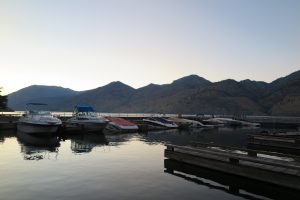 Evening at a Lake Chelan marina.

Head down to Lake Chelan on a hot summer day, and its vast surface will be speckled with jet skis and motor boats. The locals all know there’s no better way to beat the heat in eastern Washington than to get in some quality time out on Chelan’s transparent, aquamarine water. What’s less commonly known, however, is that these very activities can threaten the lake’s signature clarity.

The owners of Sunset Marina and the Lake Chelan Yacht Club agree, which is why they recently worked with Washington Sea Grant to distribute more than 200 kits to prevent and clean up small oil spills. Small oil spills from recreational vessels is one of the biggest sources of pollution in Washington waters. Between 2011 and 2015, boaters reported almost 6,000 gallons of diesel spilled in the state (and conventional wisdom says that only 20 percent of spills get reported). While much of this spillage happens in the large water bodies in western Washington—most notably, Puget Sound—the lakes and rivers on the east side are not immune to the problem. So Washington Sea Grant, housed in the University of Washington’s College of the Environment, is working with the Department of Ecology to expand programs that could help prevent and clean up small oil spills on the east side of the mountains.

“Eastern Washington is considered an underserved area,” says Aaron Barnett, Washington Sea Grant’s Boating Program Specialist. “Perhaps there’s not as much boating as on the west side, but there is still a lot of boating in eastern Washington. So, we’ve decided to push the program over here to people who want to participate.”

Washington Sea Grant’s small oil spill prevention measures are closely tied to Clean Marina Washington, a certification program started in 2005 to help marinas adopt environmentally-friendly practices. Marinas gain the certification after completing a self-audit that covers everything from fuel docks to recycling bins, and then meeting with Clean Marina Washington managers to talk about what they’re doing well and what they could be doing better. Two years ago, there was only one certified clean marina in eastern Washington. By the end of this summer we will have four on Lake Chelan alone, bringing the total number in the state up to 74.

As part of the certification process, Washington Sea Grant gives marinas small oil spill kits to share with their customers. The kit includes a small absorbent pillow that sucks up oil (but not water), which boaters can place in their bilge as a preventative measure to keep oily engine discharge from getting pumped overboard. If a spill does occur, Washington Sea Grant encourages boaters to comply with state and federal law by reporting it to 800-424-8802.

Why use a bilge pillow? “Because every drop counts,” says Pat Farrell, a member of Lake Chelan Yacht Club. “We want to keep our blue lake blue,” says Samantha Myers, another member. To order your own kit, contact Aaron Barnett at aaronb5@uw.edu.