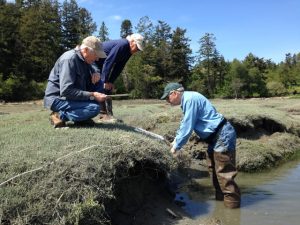 The volunteers are part of Washington Sea Grant’s (WSG) Crab Team — an early detection and monitoring program to look for European green crab and collect information on local marine life.

Washington Department of Fish & Wildlife (WDFW) is responsible for controlling aquatic invasive animals and is working closely with WSG to determine next steps for limiting further spread of the crab. The work is funded by the United States Environmental Protection Agency under Assistance Agreement to WDFW.

European green crab have been stowaways on ships bound for U.S. ports since the 1800s, establishing populations, eating local clams and other shellfish, and causing serious impacts. In Maine, for example, softshell clam harvests declined dramatically when the crab became established and eelgrass beds have been damaged by the invader’s digging habits. Until now, green crab populations in Washington have been limited to Pacific coastal estuaries. However, the 2012 discovery of invasive crabs in Canadian waters across the Strait of Juan de Fuca prompted WDFW investment in Salish Sea monitoring and early detection.

This week’s sighting was confirmed by green crab experts P. Sean McDonald, University of Washington (UW) and Sylvia Yamada, Oregon State University. A single, large, 3-inch adult male crab was captured during the Crab Team’s regular monitoring activity. WDFW and WSG are coordinating a response to the sighting, working with scientists at UW’s Friday Harbor Labs. McDonald, who serves as the Crab Team Science Advisor, called for action to “immediately expand and intensify trapping in the area and build capacity for future monitoring.” 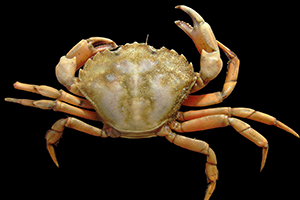 Although the crab is a prohibited species in Washington and possession is not permitted, residents can still help:

Jeff Adams, WSG marine ecologist and project manager summarized the situation. “Although unexpected and unwelcome, this finding is a perfect example of how volunteers can spur positive environmental action, and it shows that the monitoring program is working as it was designed.” Crab Team volunteers were trained and began monitoring sites in April to detect the invasive threat and monitor Puget Sound pocket estuaries that provide ideal crab habitat. The WSG monitoring program focuses on early identification of infestations so that resource managers can take action to reduce impacts and prevent further spread.

With an estimated 400 potentially suitable sites in Washington’s inland waters, experts are sounding a call to action for all citizens to keep their eyes open for green crab whenever on the beach. Program coordinator Emily Grason points out that, “Anyone can go out and look for the crabs in the water or their shells washed up along the shoreline.”

This project has been funded wholly or in part by the United States Environmental Protection Agency under Assistance Agreement PC 00J29801 to Washington Department of Fish and Wildlife. The contents of this document do not necessarily reflect the views and policies of the Environmental Protection Agency, nor does mention of trade names or commercial products constitute endorsement or recommendation for use.