Impacts from the Summer 2021 Heatwave on Washington Shellfish 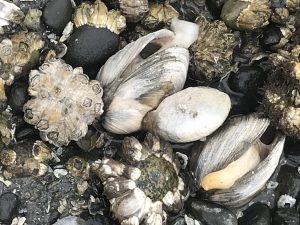 The record-breaking heat that hit the Pacific Northwest from June 23 to 28, 2021, caused harm to many intertidal shellfish and invertebrate species on Washington beaches.

On many beaches, species such as cockles, varnish clams, butter clams, and native littleneck clams—normally buried out of sight—popped to the surface of the substrate in large numbers. Manila clams were also impacted in some areas. Surfaced clams were observed to be gaping, a sign of stress, or had already died from the effects of the heat. Some Pacific and Olympia oysters initially appeared to survive the heat but died in subsequent days, perhaps weakened by the extreme temperatures and unable to recover. Many mussels along the tidelands and on rocks died (however, mussels on pilings and on rafts and floats in some areas appeared to fare better). Moon snails were noted to be extended from their shells, desiccating and dead or dying in some areas. Many sand dollars and shore crabs that were not in intertidal seeps or tide pools also died, with many observed to be floating at the surface of the water. In some areas, even the hearty barnacle perished in large numbers. Mortalities are continuing to unfold and attempts to document continuing impacts are ongoing. It may be a month or more before we see the full extent of loss.

The event is being considered a once-in-a-lifetime occurrence because of the coincidence of record high temperatures and midday extreme low tides, leading to unusually high lethal effects on intertidal sea life. This is possibly the first documented shellfish mortality event of this magnitude in modern times.

In some places, the effect is similar to a forest fire that has swept through the intertidal area at the peak of the heat each day, for six days, killing much in its path. Marine life likely experienced the extreme temperatures in the water through the heat retained in sediments, on the surface of the sediment while the tide was out, via incoming tide water heated by the sun, and as it flowed over hot sediment and rocks—a phenomenon observed by the Washington Department of Fish and Wildlife (WDFW) on previous hot days that coincided with extreme low tides. So, many areas and many species were affected, but very little has been quantified to date.

Also, as with a forest fire, not everything died and not all beaches experienced the same impacts. Some pocket areas on beaches and certain species were spared from mass die-off’s. Some beaches appeared to be almost completely unaffected by heat-related impacts, at least in the immediate term. We don’t know why this is or how long impacts will continue to unfold: it will take  time to research and find answers. It is worth noting that the heat more than likely contributed to the observed mass mortalities, but the actual cause is yet to be confirmed. 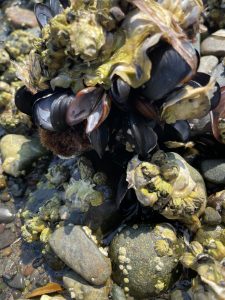 What are some of the ecological impacts that may result from this event? If the die-offs are substantial enough, the potential ecological impacts could be significant and long-lasting—as was observed following the mass sea star die-off associated with the widespread wasting disease in 2013-14. Cascading ecological effects appeared to follow the sea star wasting event. Without large numbers of shellfish in our bays filtering phytoplankton, for example, we could see changes in phytoplankton dynamics—such as unusual algal blooms. When these blooms crash, they often lead to low dissolved oxygen events, which can potentially kill fish and both mobile and sessile (immobile) invertebrates in another type of mass mortality event. The possible sudden loss of potentially substantial portions of shellfish populations on certain beaches may also pose challenges to managing fisheries for affected species, especially on beaches that were surveyed  for population density prior to the late June heat wave event. Before potential ecological impacts can be understood, resource managers and researchers have work ahead of them to understand the magnitude of  the impact to shellfish beaches around the state.

Currently, the WDFW Puget Sound Bivalve team, tribal shellfish teams, and other partners on both the Washington and Canadian side of the Salish Sea are surveying beaches to determine population densities of bivalves and making notes of recent mortalities. WDFW has created ways for the public to share observed shellfish mortalities. Members of the public may fill out an electronic form at https://publicinput.com/X7060 or send an email to deadshellfish@dfw.wa.gov. Reports should include date(s) of observation, location (beach and embayment), species affected, approximate tidal elevation if known, an estimate of the number of animals affected (number or percent of population), any additional notes of interest, and contact info for potential follow-up. Photos are also highly encouraged. Washington Sea Grant (WSG) staff are monitoring impacts and helping growers take inventory and document the effects of the heat on their crops. WSG Aquaculture and Marine Water Quality Specialist Teri King has been working extensively with homeowners of private beaches to document the changes on their land since the event. Many of these property owners also lease their tidelands to shellfish harvesters.

Economic challenges to the industry

The heat wave is yet another challenge for growers amidst recent difficulties associated with the pandemic and other economic factors. WSG has been working to understand potential impacts to shellfish growers. As a result of the heatwave event, there could be less product for shellfish farmers and tribal harvesters to sell and to farm, and recreational harvesters may also be impacted. On the farms, there will be gaps in product availability due to the event killing many or all age classes of shellfish, from seed to adult. Because so many adult clams and oysters were killed, seed shellfish may not be ready for the market for two to five years. Not every farm was affected and not all shellfish died, but initial reports indicate mortalities are having an impact. Potential effects of fewer shellfish to farm include a reduced need for workers. The price of the products could also increase as the supply of the product becomes limited. Likely, the demand for hatcheries to produce new seed for farms will be increased, but there will still be a gap, as it will take time for the oysters or clams to grow large enough for market. Already, if a hatchery has seed currently available, it is considered “pure gold” as farmers are eager to replant their crops. 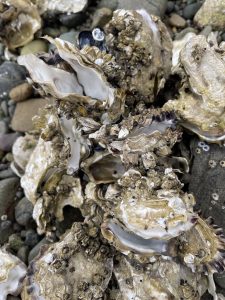 For our state-owned beaches, there could be fewer shellfish to harvest, potentially resulting in less harvesting opportunity in future years due to fewer clam and oyster resources. This could also have an impact on rural communities that benefit from economic activity created by the sale of shellfish licenses and harvesting gear, and dollars spent by visiting shellfish harvesters. “WDFW and co-managers are scrambling to understand the effects of this event on harvestable shellfish and may have some tough conversations this fall when more is known,” offered Camille Speck, Puget Sound Intertidal Bivalve Manager for WDFW. Speck added, “Although at least in the short-term, it does appear that the effects of the heat wave may be highly variable by location and species. We have a lot to learn as this unfolds.”

Potential relief for the industry

Shellfish growers could file a claim of product loss with the United States Department of Agriculture, Farm Services Agency. If a Disaster Declaration is made, farmers that applied through the Emergency Assistance for Livestock, Honey Bees and Farm raised Fish (ELAP) program could be eligible for financial assistance. The ELAP  program just began covering all aquaculture animal species as of June 1, 2021 (https://www.fsa.usda.gov/news-room/news-releases/2021/usda-expands-aquaculture-disaster-assistance-to-include-fish-raised-for-food). The program could potentially cover 75 percent of the loss and 90 percent of the product value. Despite this relief, many growers may not be able to  make up for the gaps in the various year classes of shellfish typically available on a farm at any one time.

What you can do

Share observed shellfish mortalities by registering the information with WDFW. Members of the public may fill out an electronic form at https://publicinput.com/X7060 or send an email to deadshellfish@dfw.wa.gov.

This post was developed as a collaboration between Washington SeaGrant and the Washington Department of Fish and Wildlife.