Lessons for Washington from the Japan Earthquake and Tsunami of 2011

It is hard to comprehend the scale of damage that resulted from the 2011 Japanese tsunami. Entire forests, neighborhoods and even towns were washed away. It caused the worst nuclear accident since Chernobyl. Overall, almost 20,000 people were proclaimed dead or missing.

More than eight years after the tragedy, the city of Sendai, in Japan’s Tohoku Region, is still in recovery. As the city continues to rebuild, however, local scientists and planners aim to share the knowledge they have gained to help other communities vulnerable to earthquakes and tsunamis across the globe prepare. This past November, Carrie Garrison-Laney, WSG tsunami specialist, attended the second World Bosai Forum — an international gathering focused on disaster risk reduction held at Tohoku University in Sendai — to learn how these lessons might apply to Washington.

“In Washington, we’re overdue for a tsunami,” Garrison-Laney explains. The last time a Cascadia tsunami hit was in 1700. The Cascadia Subduction Zone, on average, can expect a large earthquake every 300-500 years. “This is going to happen — and when it does, it’s going to be really devastating.” 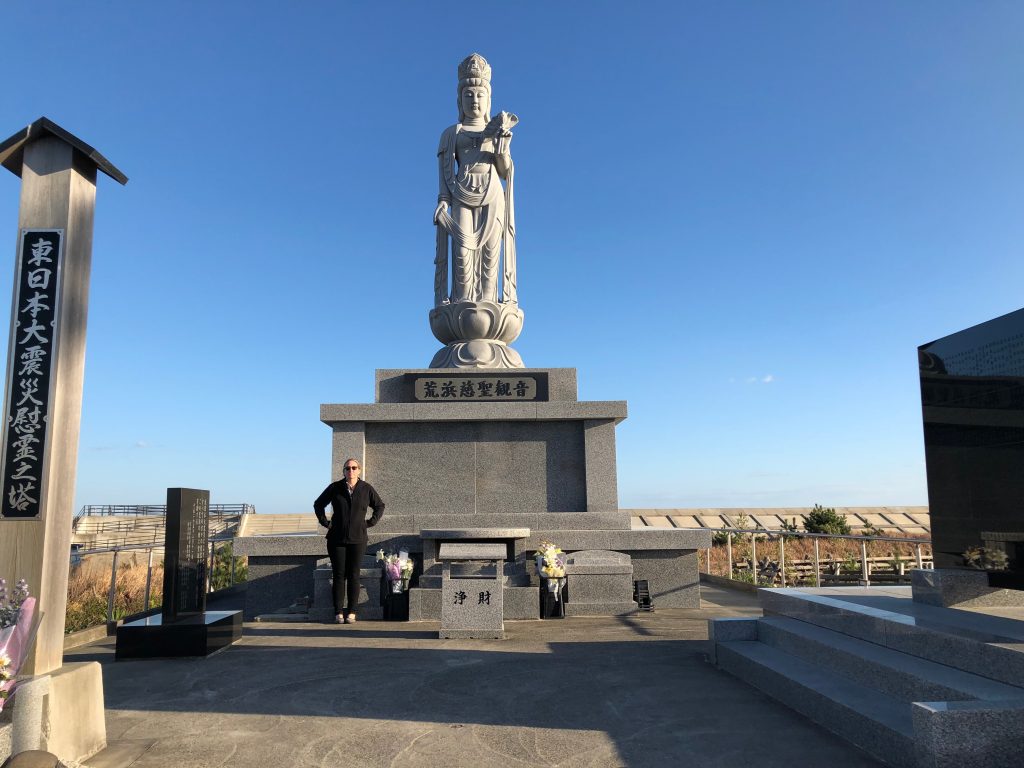 Carrie Garrison-Laney stands beneath the Great East Japan Earthquake Memorial Tower, which shows the height of the tsunami at that location.

Garrison-Laney saw remnants of that kind of devastation while she was in Japan. All around the affected areas, she saw signs marking how high the water level reached; some of them reached 50 feet high. She toured the Arahama Elementary School, the remnants of which is now preserved as a museum. Back in 2011, according to the school’s disaster plan the students and teachers originally planned to evacuate to the school’s new gymnasium. However, in the months before the tsunami, the principal Takao Kawamura decided to use the roof of the school for evacuation drills instead. During the 2011 tsunami, 320 children and adults waited on top of the building in the cold as snow fell. Over the next 24 hours, they were all rescued by helicopter. Meanwhile, the gymnasium was completely destroyed. “If we had used the gymnasium, we would have all died,” Kawamura said. “There was nothing left of the Arahama area. It was a view of the bottom of the sea, and all we could do was watch from the rooftop as the town was swept away.”

At the Okawa Elementary School, not far away, they were not so lucky. The principal was not there that day, and the lack of leadership on top of an emergency plan that was too generic resulted in a delay in evacuating. In the end, 74 of the school’s students and 10 teachers died.

The city of Sendai is determined to have a different outcome when the next tsunami hits, whenever that may be. “Some of the infrastructure projects that they’re doing are mind-boggling in scale,” Garrison-Laney says. “They’re building river levees and seawalls, and they’re raising the ground level in a lot of places by blasting mountains and trucking the sediment down.” The city has built new evacuation towers and stairs that go up to elevated road ways. They have re-evaluated which areas are safe for people to live in, with some old residential neighborhoods now limited to parks and some industry. They have also taken new, creative approaches to educating the public, such as printing disaster preparedness tips onto handkerchiefs and even kimonos. 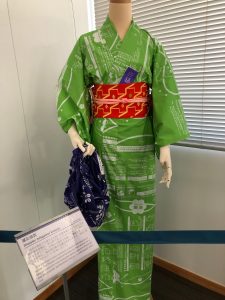 A kimono designed to help people familiarize themselves with disaster reduction.

“The whole trip, I was thinking, ‘what can we learn,’ ” Garrison-Laney says. In fact the name of the conference — “Bosai” — is a traditional word that means learning from the past to help prevent future disasters.

She came home with several ideas of how we can be better prepared locally, including prohibiting new residential construction and relocation for the areas of Washington that are at greatest risk; building more evacuation structures; better educating residents and visitors on what to do if a tsunami hits; and more regularly practicing evacuation drills.

Garrison-Laney feels “Bosai” truthfully captured the spirit of her trip. “When I was there, I actually felt hopeful,” she says. “The tragedy of what happened there is unimaginable. But to come through that and be able to say, ‘we’re rebuilding, we’re going to recover, were going to move past this’ — that’s inspiring.”