Marine Parasites on the Rise

From warming to acidification and sea level rise, the world’s oceans have undergone a frightening amount of change over the past few decades. In a recent study, ecologists found yet another shifting factor, one that’s sure to give more people the heebie-jeebies: there has been a 283-fold increase in the abundance of “sushi parasites” over the past 40 years.

This parasite study, funded by Washington Sea Grant, was led by Chelsea Wood, an assistant professor at the University of Washington School of Aquatic and Fishery Sciences who has dedicated her career to studying these types of creepy-crawlies. She and her team found a sharp increase in the abundance of anisakid nematodes, a type of parasitic worm that infects fish as part of its life cycle. They accomplished this by sifting through the scientific literature, which provided snapshots of anisakid abundance at different times. The striking results, which have implications for both human and marine mammal health, were published in the journal Global Biology Change this past spring. 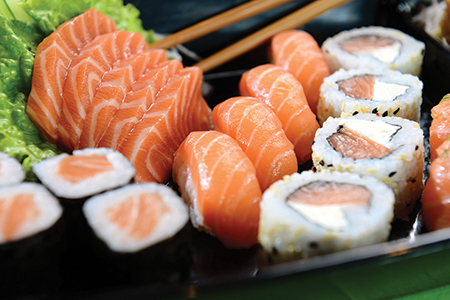 The original goal of this study was to better understand the human health risks of eating raw and undercooked seafood. Anisakiasis, the sickness caused by eating anisakid-infected fish that haven’t been properly prepared through a deep freeze or thorough heat, is thought to account for more than a third of food poisoning episodes associated with seafood. Wood says salmon is probably the biggest culprit in the United States. To help sushi lovers eat their nigiri without worry, Wood and her team set out to investigate the patterns behind the presence of the worms. “We don’t want people getting sick or being turned off of seafood if they don’t need to be,” Wood explains. If the researchers found that anisakids were more likely to occur in, say, certain areas or during certain times of the year, perhaps fishermen, seafood distributors and restaurateurs could use this knowledge to avoid those locations and times.

The researchers began a meta-analysis on a total of 123 scientific papers that had been published between 1967 and 2017, most of which were related to Anisakis species (about a third were related to Pseudoterranova species, another type of parasitic worm). This was the first time anyone had assessed long-term change in these parasites at a global scale. A total of 56,778 fish were examined across all the studies they analyzed, which resulted in finding a total of 446,615 anisakids. Through a meta-regression model—a method for conducting a quantitative survey of existing scientific literature—the researchers detected a substantial increase in the number of Anisakis species worms over the 50-year period. (The relative number of Pseudoterranova species remained stable throughout this same time.)

These findings prompted the researchers to pivot from their original focus in order to write the recently published paper about the change in global abundance. “The most exciting thing about this paper is that no one knew that this major global change was happening until we dug into the historical resources,” Wood explains. “It really shows the power of historical ecology to find changes that would otherwise be too gradual for a person to pick up on.”

While anisakidosis in humans usually poses more of a nuisance than a severe health threat, the impacts can be more serious to marine mammals. The realization that anisakids have increased so dramatically over the past few decades could shed new light on our understanding of why some marine mammal populations, such as the southern resident killer whales, are struggling. “These parasites live for a long time in the gut tracts of marine mammals,” Wood says. “Think about the marine mammal problems that we’re having right now—they’re all emaciated.” Which is to say that the issue for the southern residents might not only be a lack of food, it could also be that the whales have increasingly had to share the food they’ve already eaten with the critters inside of them.

That’s for future research to determine, and Wood’s lab is already on the case. In the meantime, Wood doesn’t want her findings to keep readers from eating seafood—she insists that she still eats sushi all the time. “Seafood processors and seafood chefs remove the worms and are generally really good at it,” she says. If you’re still worried about it, she recommends cutting each piece of sushi in half to take a peek yourself, as “the worms are big and easy to see.” It may sound gross, but for a lot of Pacific Northwesteners, it’s a lot less scary than the idea of giving up salmon.