Monitoring the Damage in the Heat Wave’s Wake 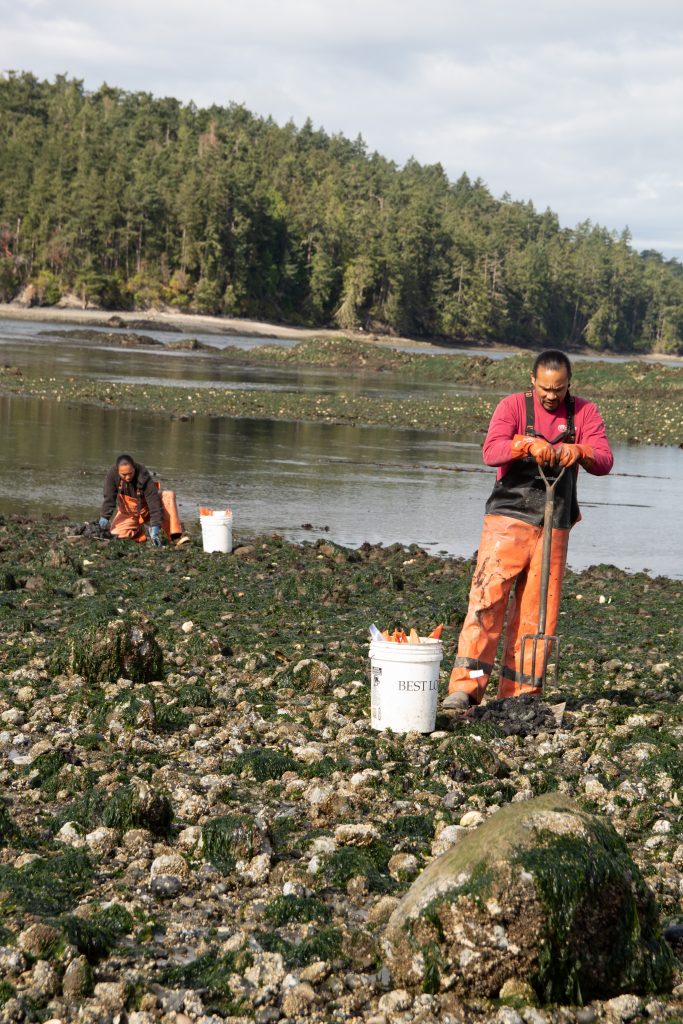 Joe Williams, front, and Darrell Williams with the Swinomish Indian Tribal Community’s Fisheries Department dig clams on a beach in Skagit Bay as part of a survey that is conducted to estimate clam biomass.
Photo courtesy of the Northwest Indian Fisheries Commission

In June 2021, the peak of an unprecedented heat wave coincided with extremely low tides in the Salish Sea, wreaking havoc on intertidal ecosystems. As a “heat dome” settled above the Pacific Northwest for several days and the temperatures climbed well above 100 degrees Fahrenheit, many scientists, resource managers and members of the public reported significant numbers of dead and dying shellfish on intertidal beaches throughout the region. Species such as cockles; Olympia and Pacific oysters; and varnish, butter, and native littleneck clams — normally buried out of sight —popped to the surface in large numbers. Surfaced clams were observed to be gaping, a sign of stress, or had already died from the effects of the heat. Some Pacific and Olympia oysters initially appeared to survive the heat but died in subsequent days, perhaps weakened by the extreme temperatures and unable to recover.

These observations raised alarm among shellfish growers and marine ecologists, especially given the ecological, cultural and commercial importance of these species. “This is possibly the first documented shellfish mortality event of this magnitude in modern times,” says Teri King, aquaculture and marine water quality specialist at Washington Sea Grant. “In some places, the effect is similar to a forest fire that has swept through the intertidal at the peak of the heat each day, for six days, killing much in its path.” The aftermath of the heat wave presented a critical opportunity to document and understand these impacts. Given this, WSG stepped in with rapid funding to support two regionwide surveys. The results of one of these studies were published in the journal Ecology in June 2022.

“After the heat wave, it quickly became apparent that we should try to capture the impacts before they were literally washed away,” says Wendel Raymond, a researcher at Friday Harbor Laboratories and lead author on the Ecology paper. The research team, which included King of WSG, sent out a survey to a network of collaborators across the region — including tribes, state and federal agencies, academia and nonprofits — to assess the post-heat wave condition of nearshore invertebrates across the Salish Sea. Participants were asked to apply a five-point rating system to evaluate the conditions of organisms at a particular location. In total, the researchers gathered 203 observations from 108 unique locations, covering 24 species.

“The strength of this study and what it really highlights is the value of local knowledge and also the importance of understanding natural history,” says co-author P. Sean McDonald, a University of Washington associate teaching professor in environmental studies and aquatic and fishery sciences.

According to the team’s results, an organism’s location and ecology contributed to how it was impacted. For example, intertidal organisms on the outer coast generally fared better than ones on inland beaches because the low tide on the outer coast occurred four hours earlier (when it was cooler). Species found higher in the intertidal were in worse condition than species found lower. 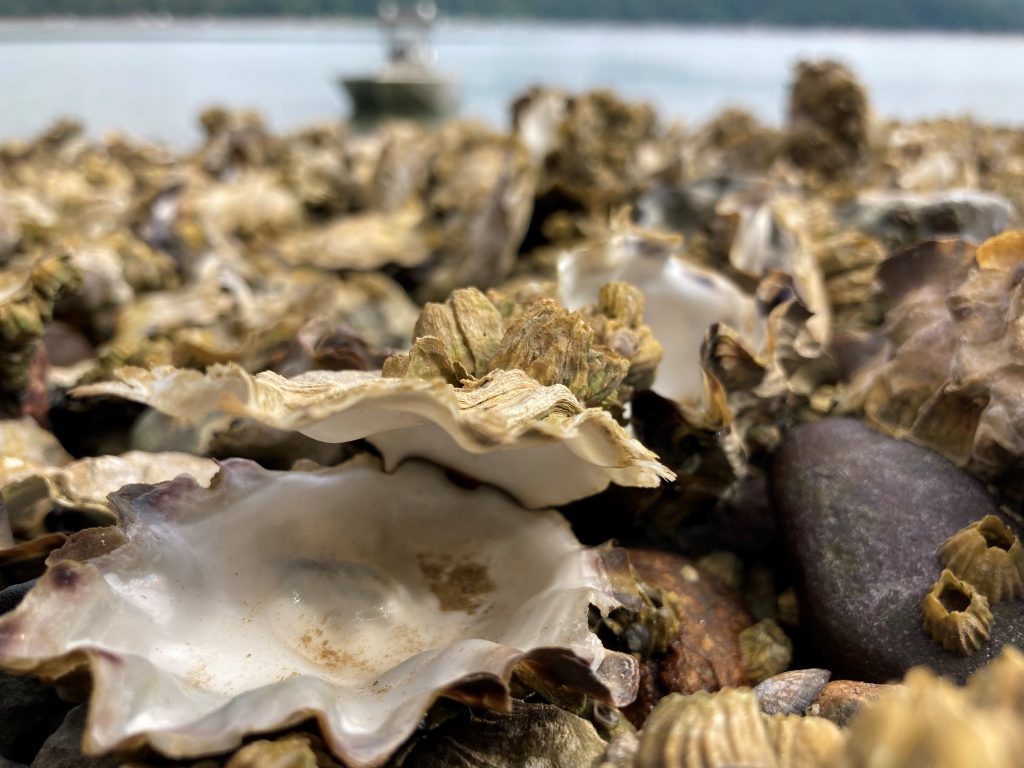 ead oysters seen along a shoreline in Washington state, following a record heat wave in summer 2021. Photo by Blair Paul

While this study is the first comprehensive report of the impacts of the 2021 heat wave, it is not the only research on the event. The Multi-Agency Rocky Intertidal Network (MARINe) collects long-term monitoring data at sites along the entire west coast of North America. MARINe had completed annual surveys in Washington shortly before the heat wave. After the extreme weather event, WSG funded MARINe to resurvey eight sites within the Salish Sea where the impact was thought to be greatest.

Comparing the pre- and post-heatwave surveys revealed significant shifts in community structure at most sites. This included large declines in rockweed, which is an important component of rocky intertidal communities because its canopy provides shelter for organisms including chitons, snails, crabs, sea stars and other species of algae. “The most heavily impacted areas were those where exceptionally high air temperature was coupled with extremely low, mid-day tides,” says Melissa Miner, a MARINe researcher from the University of California, Santa Cruz.

MARINe will continue to survey these same sites moving forward, which means the researchers will eventually be able to provide a longer-term perspective on the ecosystem recovery from the traumatic event. “As an organization, we are really interested in the long-term trends,” says Pete Raimondi of MARINe, who also works for the University of California, Santa Cruz. “The key thing will be going back over the years to come and seeing where these communities end up.”

Washington Sea Grant, based at the University of Washington, helps people and marine life thrive through research, technical expertise and education supporting the responsible use and conservation of coastal ecosystems. The National Sea Grant College Program is part of the National Oceanic and Atmospheric Administration, U.S. Department of Commerce.
www.wsg.uw.edu