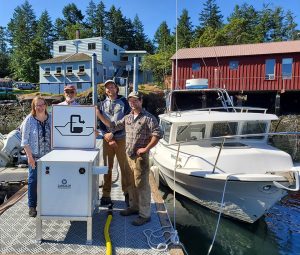 OLYMPIA – A new sewage pumpout for recreational boaters is now open at the Shaw Island General Store in the San Juan Islands. The facility is expected to serve hundreds of boaters this summer.

The idea to install a pumpout facility came from Terri and Steve Mason, longtime island residents and owners of the Shaw General Store.

“I grew up on Orcas Island and raised my children here on Shaw Island,” said Terri Mason. “Over the last 15 years, we’ve witnessed the degradation of our marine environment. We want to do all we can to help protect water quality.”

Mason says she hopes the new pumpout service will be a convenient amenity for the recreational boaters who stop by the store.

Construction for the Shaw Island pumpout facility was funded by the Washington State Parks Clean Vessel Act Grant Program. In addition to funding the construction and maintenance of more than 140 pumpout and dump stations across the state, the program also funds Pumpout Washington—a recreational boater outreach program managed by Washington Sea Grant.

“Addressing boat sewage in the San Juan Islands has been a top priority for Pumpout Washington for several years,” said Bridget Trosin, coastal policy and outreach specialist at Washington Sea Grant. “In the last decade of outreach to boaters around the state, the number one place boaters say they wish had more pumpouts is the San Juan Islands. We are thrilled to see this new pumpout and hope boaters will make good use of it.”

Pumpout services at the Shaw General Store will cost $5, and a dock attendant will need to assist. Boaters should call the store ahead of time for service at (360) 468-2288. Other pumpout and dump stations across the state are listed here: PumpoutWashington.org.