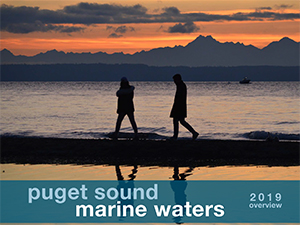 A new report details the effects of a changing climate on Puget Sound in 2019, and documents how these changes moved through the ecosystem to affect marine life and seafood consumers.

Scientists observed unusually warm water temperatures in 2019, though not as warm as during the years of “the Blob” marine heatwave of 2014-2016. Salinity was generally higher than normal throughout the Puget Sound, corresponding with low rainfall and snowpack. Changes in surface water mixing and stratification also influenced phytoplankton bloom dynamics throughout the year. Hypoxia (a lack of oxygen) was more apparent in 2019 than previous years, though no fish kills were reported. Rhinoceros auklet breeding effort and reproductive success returned to long-term average values. Otherwise, scientists reported lower numbers of fish, seabirds, and marine mammals, including continuing declines in endangered Southern Resident killer whales.

The report reveals patterns and trends in numerous environmental parameters, including plankton, water quality, climate, and marine life. The observations in this report collectively provide both a comprehensive long-term view and current assessment of the Puget Sound marine ecosystem.