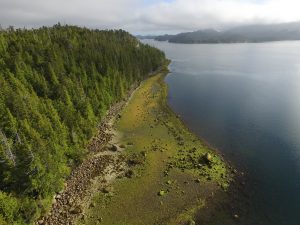 Indigenous People have been stewarding the ocean for thousands of years. This stewardship has appeared in many different forms around the world, all of which represent a reciprocal relationship between humans and the sea rooted in deep place-based knowledge. From octopus houses in Haida Gwaii to fish ponds in Hawaiʻi, an Indigenous mariculture renaissance is making waves as groups across the Pacific seek to revitalize these ancient techniques and traditions.

For the first time, information about a multitude of Indigenous cultivation practices has been collected into a cohesive online repository. Sea Gardens Across the Pacific: Reawakening Ancestral Mariculture Innovations is a new interactive, “living” story map that synthesizes knowledge about Indigenous aquaculture throughout the Pacific region, including the west coasts of North, Central and South America; the east coast of Asia, Australia, Aotearoa New Zealand; Oceania and coastlines in between. The project shows these local initiatives are not one-off projects, but rather pieces of a global story. A story that is being told by Indigenous knowledge holders, and further amplified by diverse collaborators who created the story map.

Many ancestral mariculture practices were subverted over time by colonialist attitudes and policies that targeted the erasure of Indigenous cultures and the separation of people from wilderness. As industrialization-caused ocean change continues to imperil marine resources, reviving ancient practices could help protect these ecosystems and the people that rely on them today.

For example, clam gardens — which are typically created by constructing a rock wall in the intertidal that expands habitat for clams and other species — can locally reduce the impacts of warming ocean temperatures. Skye Augustine is an Indigenous scholar at Simon Fraser University and collaborator on the new story map who spearheaded the restoration of clam gardens at two sites in the Gulf Islands of British Columbia. “One of the most important aspects of restoring these places is restoring people’s relationships with them,” Augustine says. “It forces us to reexamine the idea that humans only have negative impacts on our ecosystems, and remember that for millennia we have had positive and reciprocal relationships with the places we belong to, and that we can have those kinds of relationships once again.”

Kii’iljuus Barbara Wilson, a Haida Matriarch and Indigenous scholar from the Cumshewa Eagle Clan, collaborated with the team to highlight the octopus houses of Haida Gwaii. “In this time of climate change, it’s really important to acknowledge Indigenous mariculture as conservation and recognize First Nations governance over our land and resources,” says Wilson. “It’s time to put the library back together and learn about all the things my ancestors did to ensure that there was enough fish and octopus — looking after and respecting the environment. We managed to live in the world for thousands of years without the massive ecological destruction that’s happening now. It’s very much about not taking more than you need.”

The new story map creates a broader frame of reference for these initiatives. “It’s so lovely to have a visual representation of these practices, and to be able to see the spatial extent of Indigenous aquaculture and caretaking of coastal environments,” says Brenda Asuncion, a collaborator on the story map who coordinates a network of Native Hawaiian fish ponds with Kuaʻāina Ulu ʻAuamo. “They aren’t isolated phenomena.” Asuncion says that the story map is a way to share knowledge about Indigenous aquaculture with the potential for an even greater reach to showcase similar community-led efforts around the Pacific.

The idea for the story map began when Anne Salomon, a marine ecologist at Simon Fraser University was told by renowned fisheries scientist Daniel Pauly that she could elevate the importance of clam gardens by placing them within a bigger context. “These innovations have been present for thousands of years, but much of the world doesn’t know about them,” Salomon says. She folded working on a synthesis and analysis of  Indigenous mariculture into her graduate class on social-ecological resilience, the students of which came up with the idea of an interactive story map.

“As part of this class we attended a gathering of fish pond practitioners in Hawai’i and took part in the restoration of a fish pond,” says Heather Earle, who co-led, designed and created the story map. “What was so powerful there was the energy, momentum, and the sense of community that flowed from taking part in the revitalization of that practice. As we’ve worked with practitioners, knowledge holders, and researchers across the Pacific to compile this map, we’ve seen that same energy and momentum again and again.”

Salomon reached out to Melissa Poe, an environmental anthropologist at Washington Sea Grant, about incorporating the story map project into the Indigenous Aquaculture Collaborative Network, which is a community of practice consisting of Pacific-region Sea Grant offices; Northwest Tribes and First Nations, Native Hawaiian and Indigenous communities; and organizations and universities working to advance Indigenous aquaculture. Poe, who coordinates the network, immediately saw the potential: “These features exist worldwide, if people better understood their diversity, functionality and extent, I’m convinced that more communities would be empowered to restore them,” Poe says.

While both Salomon and Poe say the current story map only “scratches the surface,” they believe that publishing this current edition will help bring other practices into the public light. As the conversation around Indigenous mariculture continues to gain traction and as recognition of the innovation and resilience of these biocultural seascapes grows, the contributors see them as time-tested solutions to some of our most pressing coastal challenges.

In other words, this global perspective can help affirm and push forward the local ones. “The power is to first understand that almost the same idea exists across cultures, and that many of the same things are important to these seascapes across the world. For example, the wisdom of the elders is very important,” says story map collaborator Jaime Ojeda, who contributed to the story map’s piece on corrales de pescas — a practice that Ojeda’s grandmother, a Mestizo-Chiloté Elder, grew up with in Patagonia. “In terms of the past, but also in terms of right now. Sometimes people think this is history — happened. Part of the power is for people to see, oh, this is happening. In many places, this is happening.”

Washington Sea Grant, based at the University of Washington, helps people and marine life thrive through research, technical expertise and education supporting the responsible use and conservation of coastal ecosystems. The National Sea Grant College Program is part of the National Oceanic and Atmospheric Administration, U.S. Department of Commerce. www.wsg.washington.edu.