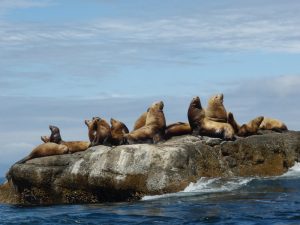 Ocean food webs are complex and often difficult to study — but breaking down every connection is important to understanding all predation pressures acting on a single species. These pressures often butt heads with commercial and recreational fisheries, and Pacific salmon have a history of such contention. Off the coast of Washington, salmon are predated on by Steller sea lions, harbor seals, and endangered Southern Resident Killer Whales (SRKW). Previous research on SRKW has been primarily focused within the Salish Sea, but little has been done to understand competition for salmon among marine mammals along the Washington coast.

WSG funding was recently awarded to collaborative project between the Makah Tribe and Western Washington University. “We are particularly interested in better understanding the predation pressure by seals and sea lions during the winter and spring, a time of year where data is hard to collect and thus lacking,” says Adrianne Akmajian, marine ecologist for the Makah Indian Tribe. The researchers aim to uncover which salmon species are being consumed by Steller sea lions and harbor seals, the proportion and age of salmon in their diet, and also if female and male pinnipeds differ in their consumption of salmon.

So how does one study ocean food webs? The answer is a stinky one: scat. A combination of molecular techniques and identifying bone remains will be used to identify salmon in pinniped fecal remains.

“We are excited to implement new tools like the DNA metabarcoding, to develop a more complete picture of pinniped diet on the Washington coast,” says Akmajian. Olfactory alarms aside, project researchers know scat analysis is a tried and true way to understand what marine mammals are eating.

Zoë Lewis, the graduate student who will be using the project for her master’s thesis, says, “I was excited about the opportunity to integrate ecology research with ecological management on a very direct level by partnering with the Makah Tribe.” Lewis also mentioned that she is passionate about “combining ecology and molecular techniques to better understand ecosystem dynamics.”

Food webs in the natural environment are complex and intricate. Trickle down effects of predation can have ambiguous effects on natural resources utilized by people, and this is especially important for the Tribe whose culture is dependent on these resources. “We hope the results from this project can be incorporated into the Tribe’s goals to conduct ecosystem-based fisheries management, in which humans are an integral part of that ecosystem,” Akmajian says.