Sally Brownfield: People of the Water

Washington Sea Grant is a proud sponsor of We Are Puget Sound: Discovering & Recovering the Salish Sea, a new book by David L. Workman, Leonard Forsman, Mindy Roberts and Brian J. Cantwell from Braided River (an imprint of Mountaineers Books). The following profile is an excerpt from the book. 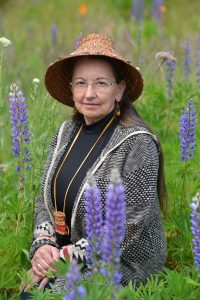 Sally Brownfield is a soft-spoken, strong Puget Sound woman. For all but two of her sixty-plus years, her home has been a little peninsula between two narrow inlets at the southern end of the Sound.

Sally is one of the People of the Water, the Squaxin Island Tribe that has lived on and with the water and its plants and animals for thousands of years. Daughter, wife, mother, educator, food gatherer, weaver, salmon fisher, oyster shucker, archaeological digger—her story is rich with experiences. After college and graduate school in Tacoma, she taught at Washington State University for two years in Pullman, where she felt much like a salmon out of its element. After months of working in the dry Palouse country, “I would just come back and sit by the water and smell it . . . take it in,” she recalls vividly. “There is a calming and spiritual presence to being on the water.”

As a little girl, she spent many of her days combing the beaches of Little Skookum Inlet, Eld Inlet, and Oyster Bay, where creeks spill into Puget Sound under the bridges of US 101, the Pacific Coast Highway. “The bay was part of our growing up, our childhood,” she recalls. “We learned from it and respected it.” She and her family would be on the shore when the smelt came in, so all could be part of the life-sustaining harvest.

On the Sound, Sally observed the life cycle of the indigenous Olympia oyster. In seventh grade, she learned how to open, or shuck, this Northwest delicacy. “They are just so beautiful, every single one of them,” she says. Sally treasures a book published in 1938 by a local game warden. “He tells about observing our native people as they gathered these oysters,” she says, “and how careful they were about it because Olympia oysters are very small and very delicate. So our ancestors were very careful. They would lay on their bellies when harvesting oysters, to avoid crushing them. When outsiders came, they walked on the beds and crushed them, and over-harvested. The oysters almost became extinct . . . But like the native people, those oysters have survived.” When asked what Puget Sound means to her, she will tell you “it is our life.”

The seven southernmost bands of the Salish people came to be called the Squaxin Island Tribe in 1854, at the signing of the Medicine Creek Treaty with the US government. Many of those families were consigned to live on Squaxin Island, a two-square-mile strip of land tucked along the southwest reach of larger Harstine Island.

Before they signed the treaty—importantly reserving their right to hunt and fish in their usual and accustomed places—the Squaxin bands lived in dispersed permanent villages on the shoreline, and they moved to other hunting, gathering, and fishing sites on a seasonal basis.

Sally’s immediate family lived at Kamilche Point, the tip of the mainland peninsula where Little Skookum splinters off from Totten Inlet. “It was my great-grandmother’s place,” Sally explains. “The place is still in our family. My grandfather was born and died on that place—and all his children. My mother was born there.”

She reflects: “Sometimes I think it’s hard for people who haven’t been on the water to have an understanding of, when we talk about treaty rights and fishing rights, what that really means. It’s not just about economics. It’s about our way of life. It’s about our diet. It’s about exercise, education, entertainment, and how we see and understand the world around us. It’s about a way of living with the land and the water.

“We are always taught that if we are going to harvest something, we only harvest so much of it. We don’t take it all. When gathering fiber for weaving, I only take so many plants—and only so much from one area. You leave enough so they can regenerate.”

Perhaps nothing speaks more eloquently about the importance of Puget Sound and its resources to the Squaxin and other native people than the celebration that occurs each August at Arcadia Point, when the salmon return to spawn in these reaches of the Sound. The people gather for the First Salmon Ceremony to recognize the first run of the season. “We give thanks to the salmon for coming back to us,” Sally explains. “We take only the flesh and return the rest of the fish to the water.”

Life began to change in a big way for Sally Brownfield and other Squaxin people in 1974. The local Kamilche school had been consolidated into the Shelton School District. With that move, the land and school building were suddenly available for sale. The Squaxin, who had no reservation on the mainland at the time, got a loan from the Bureau of Indian Affairs and bought the property. “That became our center,” Sally recalls. In time, the tribe bought an oyster farm on the shore of Harstine, the “big island” of Mason County. Later, the tribe began farming salmon in net pens on the east side of Squaxin Island.

That same year, US District Court Judge George Boldt changed the face of natural resources management in Washington State. In a lawsuit brought by the tribes and the United States against Washington State, he ruled that the 1850s federal treaties reserved the rights to half of the fish harvests for the tribes who signed those treaties. They were entitled to their own separate fishing seasons and regulations regardless of reservation boundaries. The tribes were now co-managers of the state’s fish harvests with the government.

In time, a federal Housing and Urban Development grant allowed the tribe to build low-income housing at Kamilche, just off US 101. This allowed the scattered Squaxin people to start to return from the surrounding area and distant places. Then came a gas station serving the community as well as thousands of travelers on the highway. And, after a 1988 federal law allowed tribes to operate casinos under legal compacts with states, a major new source of income opened up to the Squaxin people. They built their Little Creek Casino and hotel right off US 101.

Meanwhile, the Squaxin and four other South Sound and coastal tribes had decided to pool their staffing, expertise, and dollars for social and health services and planning. They formed the South Puget Intertribal Planning Agency to coordinate services for their peoples. Today, Squaxin and other tribes are full partners in managing all manner of resources, including the natural resources that have sustained them for millennia.

As Sally describes the changes that she has witnessed in a generation or two, she observes: “In recent years we have regained a lot of hope, because more people have recognized that what we humans do has a huge impact on the environment, on our life. Not just our livelihood, but our quality of life and being able to breathe clean air and have clean water. We [Squaxin] are continuously having a dialogue between industry and people who watch over the environment. We must have balance in everything. I think there is more of an understanding today than in probably the last several decades.”

When asked if there is an aspect of Puget Sound that she finds especially remarkable, she says, after pondering for a moment, “That it has sustained us as much as it has! It has amazing capability for rebuilding itself, but we are pushing it to the brink. If we are responsible with our natural resources, they will sustain us.”