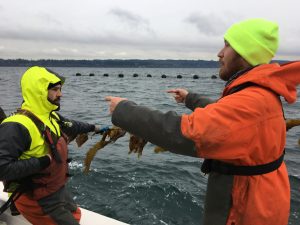 There has been a lot of recent interest in kickstarting a seaweed industry in Washington. But is it currently possible? If you want to become a kelp farmer, where do you even start?

Earlier this month, Washington Sea Grant (WSG) hosted a Seaweed Farming Intensive Training to help aspiring seaweed farmers and entrepreneurs answer these and other questions. The first event of its kind in the state, the three-day training covered everything from local seaweed ecology, how to choose a farm site, the agencies involved in securing an aquaculture permit, and even how to market a seaweed product and manage a business. The training was organized in partnership with Hood Canal Mariculture, Puget Sound Restoration Fund, NOAA and the Washington State Department of Veterans Affairs Veterans Conservation Corps. 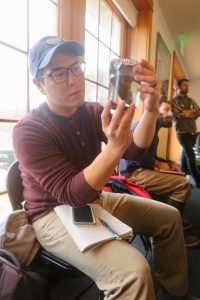 A participant of the training inspects a sample of sugar kelp as it releases its spores.

Seaweed has been farmed for centuries; it is currently grown in about 50 countries, with China, Indonesia, Japan, North Korea and South Korea being the top producers. In the U.S., 95 percent of seaweed is imported — but domestically-grown seaweed has significantly increased since 2017 and, according to Peter Piconi of the Maine Island Institute, who presented on seaweed market analysis at the training, the U.S. is expected to double its seaweed production by 2025. Most of this growth has occurred in Maine and Alaska, by farmers who are already engaged in maritime activities such as lobstering, fishing or shellfish aquaculture.

What’s driving this increase? “Consumers want clean, natural ingredients that are sustainable and locally-sourced,” Piconi says. Many potential farmers are excited by these same aspects of seaweed farming, viewing it not just as a business venture but also a means toward ecosystem restoration, including nutrient remediation and possibly even ocean acidification mitigation. “Farming seaweed would allow me to effect positive and tangible change on the environment,” one participant said.

In Washington, few seaweed farms currently exist. Participants of the training had the opportunity to tour two of them: Hood Canal Mariculture, an experimental floating farm that began growing sugar kelp to investigate its potential to locally reduce ocean acidification, and SolSea, a research and pilot commercial farm that grows Turkish towel seaweed in tanks at the NOAA research facility in Manchester, WA.

The training also showcased successful seaweed products, such as the kelp salsa made by Barnacle Foods in Juneau, AK. Another presentation discussed whether the demographics and consumer preferences of Washington State residents bode well for local seaweed markets: turns out, they do!

Perhaps more than anything, the training facilitated the creation of a community that is passionate about seaweed aquaculture and eager to work together to get the industry off the ground. We can’t wait to start eating your crops. 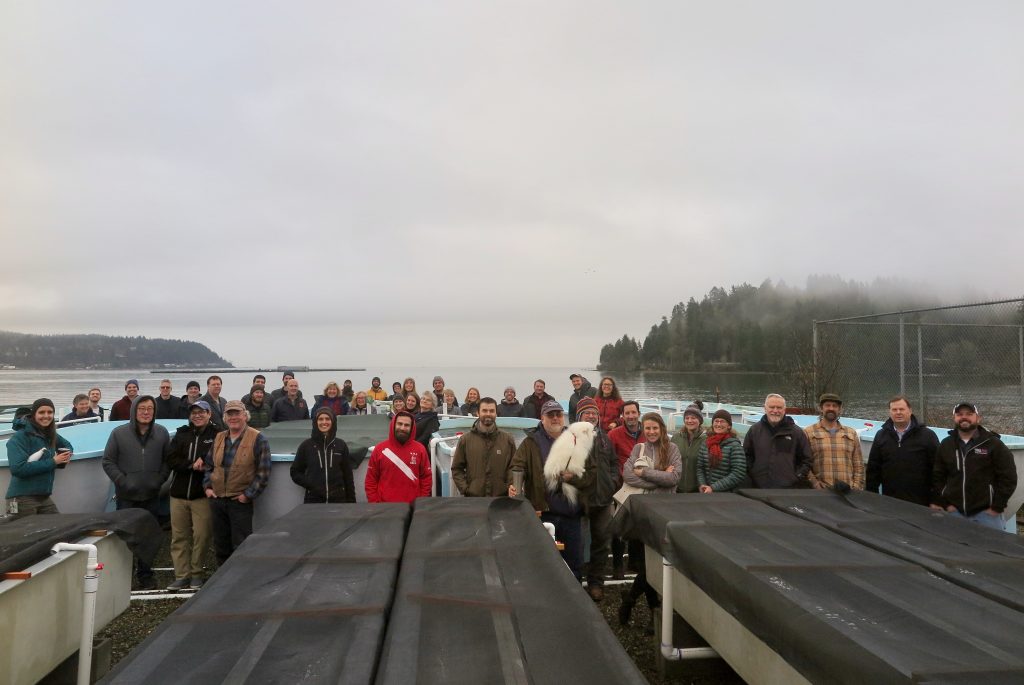