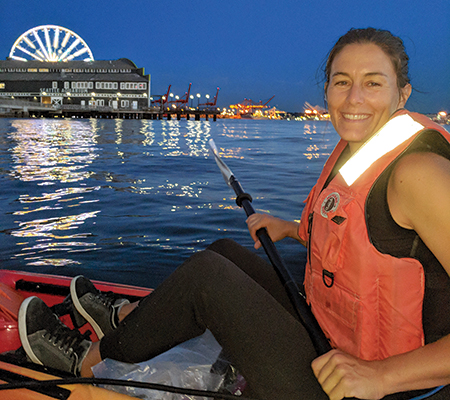 Picture going out on a small boat or a kayak. Do you see yourself paddling past a serene, relaxing marsh? Or perhaps along some rugged, remote coastline?

You probably don’t picture Kerry Accola’s routine: paddling past the piers and bulkheads of the downtown Seattle waterfront. “It’s a different experience! It can be relaxing at certain times, while stressful at others, what with the waves and all the wakes created by the boats and ferries,” Accola says. “But, overall, the waterfront is an interesting place to be.” It’s especially interesting because the Seattle waterfront is an important place for salmon — which is what brought Accola here in the first place.

Accola is a graduate student at the University of Washington’s School of Aquatic and Fisheries Sciences. She’s co-advised by research scientist Jeff Cordell, whose previous Washington Sea Grant (WSG)-funded research helped lay the foundation for modifying the renovations to Seattle’s Elliott Bay seawall in order to create habitat for juvenile outmigrating salmon. Now, three years after the seawall renovation was finished, Accola and Cordell are wrapping up another WSG-funded research project to analyze the ecological success of the new seawall design.

To do this, the research team completed more than one thousand salmon monitoring surveys at the seawall, using a hydroacoustic camera mounted beneath a kayak. This camera helped Accola and others observe salmon activity around the wall. The camera footage revealed that salmon are more likely to be found beneath the modified piers in the new seawall, indicating that the habitat enhancements have had their intended effect.

Because it uses sound waves and not light, the hydroacoustic camera allowed the research team to monitor during the night as well as during the day, and they found that there were more salmon along the waterfront at night, mostly out in the open between the piers. Accola points out that she spent an entire season snorkeling in the area the year before she conducted the hydroacoustic surveys, which put her in a good position to interpret what her camera was telling her. “The snorkel surveys really helped me familiarize myself with which fish were in the area and how they were moving,” Accola says. The research team found that the trends they observed in the footage from the hydroacoustic camera corroborated their snorkel survey observations.

The scale, visibility and success of this urban restoration work has garnered much media attention in the last few years. As a result, Accola has had many opportunities to share her work with the public. “I’ve done quite a few talks, and I’ve really enjoyed it,” Accola says. “People can go see the seawall, so it’s something that’s immediately tangible and easy to understand. That makes people enthusiastic.” The results also have good implications for the groups who fish in Elliott Bay, which includes the Muckleshoot and Suquamish Tribes (the area falls within their usual and accustomed fishing grounds).

At the same time, Accola emphasizes that the seawall is just a small part of the salmon’s migration journey, and as a scientist, she is always mindful that just because everyone is enthusiastic about a project doesn’t mean that it’s working the way it was intended. In the case of the seawall, however, the results so far do seem to be something to celebrate.

Cordell will continue post-construction monitoring of the seawall’s effects on outmigrating salmon for another seven years. As for Accola, she’s excited about the future of the seawall and salmon research. “I would love to do more, since we’ve only scratched the surface of what we could learn about salmon distributions and differences in behavior and movement at night and along the new seawall,” she says. “Salmon travel long distances, and while most die at sea, there are high mortalities at every life stage. That’s why only a small percentage return to spawn, so anything we can do at this juvenile life stage to increase their chances of returning seems important to me.”

Accola says that while people often desire to restore ecosystems to so-called natural condition, – something resembling that idyllic marsh or rugged coastline – this is rarely feasible in urban environments like Seattle’s waterfront. She adds, “The seawall is a great example of an innovative way to think about restoration and improving nearshore habitats in an urban environment. I think it was really forward thinking of the City of Seattle to go ahead with this project, and I’m so glad to have been a part of it.”