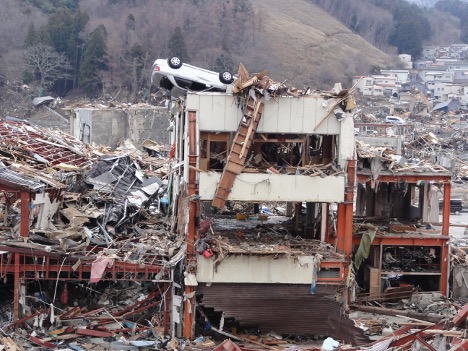 On March 11, 2011 the largest earthquake ever recorded in Japan — the 4th largest ever recorded worldwide — and the resulting tsunami devastated coastal areas of Aomori, Iwate, Miyagi, Sendai, and Fukushima in eastern Japan. The tsunami attained a maximum height of 133 feet (40 meters) — the height of a 12-story building. Some communities were completely washed away. The tsunami also caused a nuclear accident at Fukushima Daiichi when 50-foot (15 m) waves swept onshore and disabled the power and cooling functions for the reactor cores.

Despite being world leaders in disaster prevention and preparedness, the  Japanese were caught by surprise by the size of the earthquake and tsunami, both much larger than expected. The tsunami overtopped and destroyed tsunami seawalls, tsunami gates, and breakwaters. Even with these countermeasures, evacuation buildings, and frequent evacuation drills, over 18,500 lives were lost, and over 2,500 people are still missing.

Footage of the tsunami, broadcast live on TV around the world, was a wake-up call for Pacific coast residents along the Cascadia subduction zone. Though currently quiet, the Cascadia subduction zone is capable of producing large earthquakes and tsunamis, as it did on January 26, 1700. We know this in part from Japanese damage reports of losses from a tsunami with no preceding earthquake, or an “orphan” tsunami. A unique interdisciplinary collaboration between Japanese and American researchers pieced together the evidence for this great Cascadia earthquake and tsunami, and were not only able to date the earthquake to the year but also to the day and even the hour (around 9 p.m.) by calculating tsunami travel times across the Pacific Ocean from Washington to Japan.

Advances in earthquake and tsunami modeling, and new high resolution Digital Elevation Models (DEMs) now allow the creation of detailed tsunami hazard products. Since 2011, the NOAA Center for Tsunami Research (NCTR) at the Pacific Marine Environmental Laboratory in Seattle has advanced tsunami detection in the oceans, and high-speed forecasting through the Tsunami Warning Centers. The NCTR-affiliated Cooperative Institute for Climate, Ocean, and Ecosystem Studies (CICOES) at the University of Washington has improved tsunami observation, modeling, and forecasting for the next-generation tsunami forecast system. CICOES also developed tsunami models used to develop new building design standards that will ensure that structures will be able to withstand tsunami forces. Both NCTR and another UW group, the UW Tsunami Modeling Group have produced tsunami modeling published by the Washington Geological Survey as high resolution tsunami inundation and evacuation maps for Washington’s coastal communities. These new maps are updates of 20-year-old maps that were made using a larger tsunami, motivated by the surprising size of the 2011 tsunami in Japan. Eventually maps that show a suite of tsunami scenarios and their probabilities will replace these “worst case” maps, and help communities make informed planning decisions such as where to build critical structures like hospitals, schools and firehouses. Other modeling products in development include tsunami hazard maps for the maritime community, and tsunami debris maps that will help communities plan for the disposal of tons of tsunami debris.

Bosai is a traditional Japanese word used to describe a holistic approach to reducing human and economic losses from disasters. Bo means prevention, and sai means disaster, and the concept of bosai is rooted in Japanese culture. Bosai represents activities in all disaster phases, including prevention, recovery, response, and mitigation. The work that Washington Sea Grant and other Washington agencies have done since 2011 embraces the spirit of bosai, but much work still needs to be done to ensure the safety and resiliency of our coastal communities.

Many organizations and agencies are hosting remembrances of the 2011 earthquake and tsunami, listed below:

For more about tsunami hazards in Washington State, visit:

For current tsunami hazards, and much more information about tsunamis, visit: