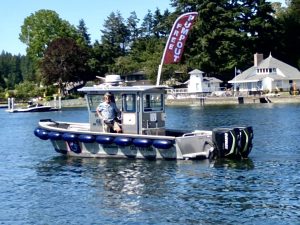 For the past two years, the pandemic has stimulated boat sales by 17.8% and increased boater activity on the waters in Washington State. With an increase in boating activity, Washington State Parks Clean Vessel Act Program (CVA) is making it a priority to add infrastructure that will meet the growing needs for more sewage disposal options in Washington. Catherine Buchalski Smith, the manager of the Washington CVA Program, explains, “Washington State Park’s Clean Vessel Act Program has continued to work closely with marinas to increase pumpout options throughout Puget Sound and the San Juan Islands for boaters.” At least 15 projects are in the works and recently completed projects  include new pumpout carts installed at the Makah Marina in Neah Bay, Cap Sante Marina at the Port of Anacortes, and at Squalicum Harbor in Bellingham. Skyline Marina in Anacortes replaced their older stationary pumpout. In the San Juan Islands, a stationary pumpout was also replaced at Deer Harbor Marina and a second pumpout boat was purchased by Roche Harbor Marina and the Port of Friday Harbor installed a new pumpout barge.

Pierce County recently added a second vessel to provide mobile pumpout service to address the increase in demand in south Puget Sound waters. Jeff Barney, program director of the Pierce County effort, touts these new boats as, “Ideal to service the remote locations in the Southern Salish Sea.” In addition to the new vessel, the city of Gig Harbor has joined the program with services available to those anchored in the bay or moored at Jerrisch dock or at the Seattle Yacht Club outstation.

How do boaters learn about pumpout options?  Through the outreach efforts of Pumpout Washington, an educational outreach program run by Washington Sea Grant with funding from the Washington State Parks CVA Program. Pumpout Washington keeps boaters informed of updates on new pumpout locations, instructs boaters how to effectively pump out, and provides free tools for efficient pumping. But that isn’t the only resource available to boaters. The Washington Department of  Ecology’s “Pump Out Don’t Dump Out” campaign make it easier for boaters to comply with the Puget Sound No Discharge Zone (NDZ) ruling, which went into effect five years ago.. The ruling established Puget Sound and certain adjoining waters as areas where boaters may not release treated or untreated sewage from Type I and Type II marine sanitation devices (MSDs). You can learn more about it here.

Among the tools offered to boaters is the free pumpout adapter, an easy screw-in nozzle that keeps sewage from spilling over. Washington Sea Grant and Washington State Parks CVA Grant Program also promote Pumpout Nav, a free phone app that allows boaters to find one of nearly 200 pumpout and dump stations in Washington, as well as hundreds of pumpouts in California and Oregon. The app is available for both iOS and Android. Pumpout Nav is a convenient tool helping boaters to keep Washington’s waters healthy and their holding tanks empty.

Along with the opening of boating season comes an increased concern for not only sewage spills, but also small oil spills, which account for 75 percent of the oil dumped into local waters. The Washington Sea Grant Small Spills Prevention Program provides boaters with the knowledge and tools they need to stop oil pollution at the source, including a free Small Oil Spills Prevention pillow, a small absorbent pillow that is placed alongside bilge pumps to prevent oily discharge from entering the water and a fuel bib, an absorbent pad that fits snuggly on the fuel nozzle of a boat. The Small Spills Prevention Program is managed by Washington Sea Grant and Washington Department of Ecology.

Washington Sea Grant, based within the College of the Environment at the University of Washington, helps people and marine life thrive through marine research, technical expertise and education supporting the responsible use and conservation of coastal ecosystems. The National Sea Grant College Program is a federal-state partnership of 33 programs nationwide within the National Oceanic and Atmospheric Administration, U.S. Department of Commerce. www.wsg.washington.edu.