Washington Sea Grant is a proud sponsor of We Are Puget Sound: Discovering & Recovering the Salish Sea, a new book by David L. Workman, Leonard Forsman, Mindy Roberts and Brian J. Cantwell from Braided River (an imprint of Mountaineers Books). The following profile is an excerpt from the book. 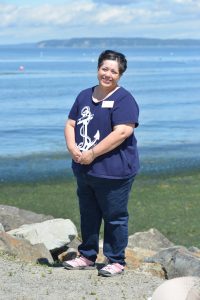 There was no large body of water for Emma Rodriguez to experience where she grew up in north central Mexico in the 1970s. But that changed in a big way when she came to the Seattle area, first Ballard and then Edmonds, and created her family of Puget Sounders. It was there that she fell in love with the salt air. “It gives me energy to see and smell the ocean. It gives me motivation to keep going,” she says. In 2015, Emma learned about, and eagerly signed up for, Washington State University Snohomish County Extension Beach Watchers, a group of more than one hundred Beach Watchers and thirty-five or so Beach Naturalists who donate more than eight thousand hours in community education and research about the Salish Sea in Snohomish County. Similar programs exist in Skagit, Island, Kitsap, and Jefferson Counties.

Emma spends most of her beach volunteer time at Mukilteo Lighthouse Park and at Brackett’s Landing in Edmonds, a city-owned shoreline sanctuary next to the state’s busy Edmonds-Kingston ferry terminal. Brackett’s is famous for what lies under the water just off the beach—Edmonds Underwater Park, a magnet for scuba divers who explore a series of man-made reef structures and sunken vessels that form an extensive artificial habitat for a wide variety of marine life. On her beach visits, Emma sees a diverse array of people of all ages enjoying the urban coastline.

She is inspired by the act of helping people understand “how we can take care of the creatures.” She says, “If I can help even a tiny amount, I am happy to do it. What concerns me most is the garbage. I like to walk on the beach, and I find straws, socks, cans, plastic bags, bottle caps, all kinds of trash.” Emma is encouraged by bans on plastic shopping bags in Seattle and in Thurston County at the south end of the Sound. She applauds Seattle’s ban on the use of plastic straws—and the decision by Starbucks to quit using plastic straws in the company’s network of coffee shops.

“Since I am Hispanic, I would like to see more education about the sea,” she says. “I would like to see bilingual workshops for people speaking Spanish and other languages. We are part of this, and it is important that we learn how to take care of it.” Emma has invited Spanish-speaking moms with young kids to the beach to learn about the ecosystem here and how to protect it. For example, she teaches them to avoid crushing the beach creatures by being careful where they walk.

When a friend’s mother visited from Mexico, Emma invited her to the beach, where she walked in the water and got her photo taken with divers. On a subsequent trip, Emma took her to the Seattle Aquarium. “She touched the sea stars. She saw so many creatures,” Emma relates. “She had never seen anything like that before, and now she encourages her daughter and the family to visit the beach and the aquarium.” And so it goes in Emma’s life, creating friends and advocates for Puget Sound, one visitor at a time.

Learn more about We Are Puget Sound. 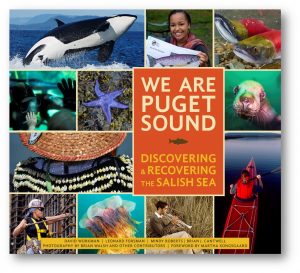