Who Brings Your Seafood to You? An Interview with Dan Sleavy from High Tide Seafoods 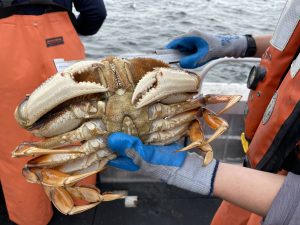 Processors are essential to getting seafood such as Dungeness crab to market.

Local seafood processors provide valuable services to their communities by supporting fishers, bringing consistent seasonal work to locals, and providing fresh seafood. Dan Sleavy manages one such processor based in Port Angeles, High Tide Seafoods, which has been a family-owned staple of the Olympic Peninsula since 1980.

High Tide Seafoods has the largest processing facility in the area, which can process up to 60 tons of fresh salmon per day and also sells live Dungeness crab and smoked salmon by the Port Angeles Harbor.

“Before coming to High Tides, I used to work as an independent crabber, which gives me a great perspective of the challenges of working as a crabber or fisher. I like working with local fishers because there’s a loyalty and trust in working with them that comes from really getting to know them. We’ve often bought from multiple generations.”

Small fishing communities are often multi-generational and gravitate towards working with other local businesses to process and sell their products.

“Local processors like us support local economies, and we help develop a sense of community for fishers both around Port Angeles and across the Olympic Penninsula. Our focus now is less about turning a big profit and more on being able to keep supporting local fishers and employing people. We fill in a pretty unique position as a processor because we are a little too big now to be considered a small business but still too small to be part of most of the large fisheries markets.”

High Tide Seafoods has been family owned and operated for over 45 years, with the owner now in his mid-70s and the business’s foreman being the owner’s daughter. Dan now manages about seven full-time employees, some of which have been around for over 20 years, and typically about 20 people working as seasonal and part-time seafood processing crews. These seasonal crews often consist of lower-income people who otherwise wouldn’t be able to work due to a lack of entry-level jobs around Port Angeles. Dan says that they’re happy to employ them are long as they can reliably do the work.

“We compete with larger processors, which have access to the larger markets and use more automated processes because they’re able to process a lot more fish,” Dan says. “Oftentimes, though, the volume can come at the cost of the quality of their seafood. We usually sell around five to ten containers of black cod to Japanese markets and use blast freezers to freeze fish quickly and manually. Being able to maintain a high quality lets us develop a good reputation.”

High Tide also participates in local collaborations. “We do a lot of work with tribal communities to support their fishing industries and can help them access foreign markets. For now, we mostly work with tribal communities on the Olympic Peninsula like the Makah and the Quinault communities, but we’ve also worked with the Yakama Nation and communities along the Columbia River. Working with tribal members can be interesting because every community has a unique culture but are also typically very reliable. The communities are changing a lot now though, with many of the fishers we work with aging and fewer young fishers coming up to take their place.”

As fisheries markets have fluctuated in response to COVID-19, regular challenges have been exacerbated for seafood processors like those managed by Dan, namely finding reliable labor and access to products.

“Not all communities have support networks and many have been hit hard by fisheries disasters and instability that have stemmed from restrictions,” he says. “It was difficult for us to keep working with fishers in tribal communities like the Makah Nation once their borders had been closed. Early on, many fishers moved their operations to Port Angeles directly instead of working with local tribal processors.”

Dan says that opportunities for training programs like safety and first aid as well as direct marketing workshops are particularly valuable for fishing communities and processors. Helping provide technical expertise and innovation to expand the ability to streamline processing can help support these fisheries processing businesses when labor is inconsistent.

“Moving forward, we’re hoping to expand our retail capacity in Port Angeles, and to look for opportunities for technical innovation to streamline our seafood processing. Eventually, we may also try to partner again with communities around the Columbia River in Southwest Washington. We support the local crab fest event in Port Angeles every year and are going to try to help support a similar event in the Westport and Long Beach area this year.”

Mid-sized local processors like High Tide Seafoods are critical parts of communities with long-standing fisheries industries. Working with locals, tribal communities, and other fishing communities around the Olympic Penninsula helps develop a sense of community between these groups while supporting their local economies.