Who Brings Your Seafood to You? An Interview with Hazel Secor from Cape Flattery Fishermen’s Co-Op

Hazel Secor has been working as manager of the Cape Flattery Fisherman’s Co-op in Neah Bay, Washington since 2014, supporting the local fishing industry and working with fishers to process and distribute seafood to communities around the Olympic Peninsula.

Hazel started working in fisheries with the Makah Fish Company when she was in high school. “I grew up here — this is a fishing village, everyone fishes,” she says. “I like this work  because you get to visit with everyone and see what’s going on. It’s better than sitting in an office, in a little cubicle! I’m proud of being a service to the fishermen.” Before working with the Co-Op, Hazel worked for the Makah Tribe for 20 years serving the community around Neah Bay. Hazel first worked with Washington Sea Grant through the safety courses organized by Sarah Fisken, marine operations specialist. “I was working for the Makah Tribe about 15 years ago, and we would get the fishermen all sea safety prepared for the season.”

The Co-op is owned and operated by fishermen from the Makah Tribe in and around Neah Bay. Fishermen have the option of selling to the fish buyers at the docks or to the co-op, giving them options and a safety net to support their operations. 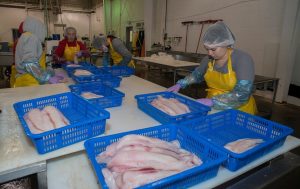 “I was really drawn to the Co-op as a service to the fishermen,” she says. “The way we work at Cape Flattery isn’t your normal fish buying process. We cater to the fishermen. It is a service where a bunch of fishermen come together to sell their product. We try to get the best price for the fishermen but still be able to pay our bills and our employees. And at the end of the year, if we made any kind of profit it gets divided up and goes back to the fishermen for however many pounds they brought in.”

Fishermen that work with Hazel use several different types of fishing systems including long-liners, trollers, and seiners that implement different techniques to catch a variety of fish species. “Some days you can see a long-liner, a trawler, and then a salmon fisher all in the same day,” she says.

“Out of the around 60 boats that operate here, some we don’t make much money from — like some of the boats that catch cod or other fish that can be sold in high volumes for fish and chips. It keeps the fishermen going though. It keeps them employed and that means that our work is still valuable.”

Since she sees a variety of species, Hazel develops a sense for how populations change every season. “We probably took about a third of the quota for Chinook this year,” she says. “It’s like they just didn’t show up this year. One reason may be that we had lots of orcas. It’s great that they’re there, but often we’d find that when hooks came up everything but the head would be gone!”

Predators aren’t the only thing that can impact fish populations: “Sometimes when our water’s warm the fish high-tail it further out into the ocean, so we don’t see them,” Hazel says. While some populations can fluctuate in availability to local fishers throughout the years, others are more consistent. “What’s really helped us survive is like four fishermen who have been doing nonstop black cod. Whenever the weather lets up, they head out. Without them we’d probably have to close down in the winter till March.”

Like most in the fishing industry and many businesses that operate on coastal Native lands, Hazel and everyone at the Co-op have had to be very flexible during and following the impact of the pandemic. To continue working, “the fishermen would stay on their boat, I would record their poundage then send them a video to confirm. Everyone was a good sport about it, and we ended up not having one person on our team getting COVID,” Hazel says.

With the Makah reservation’s borders now open, Hazel says the Co-op is trying to expand their capacity for individualized services to community members. Delivering orders directly to people’s homes is a service they hope to re-establish by applying for a USDA grant for several blast freezers that will help process fish individually while limiting the exposure to customers. 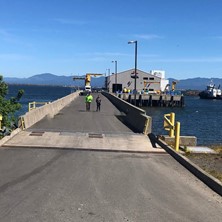 “There are a couple different fisheries that we haven’t been able to fish on because of the pandemic, which has really impacted the troll fleet.’ Due to the unpredictability of the markets, Hazel says the Co-op “may receive requests for thirty thousand pounds of fish to either be sent away to be processed, but then the outside processor will call us right back to say they’re getting shut down because of safety issues or quarantines, so not to send them anything. Since we also need to stay safe and follow guidelines, there’s instability that can really hurt us and our fishermen.”

Working down on the docks, Hazel develops strong relationships with the fishermen and other fish buyers and can help them through challenges. “Last year I helped close to 400 people get on unemployment, because a lot of them don’t really know how to navigate computers.”

Co-ops like Cape Flattery are key parts of local communities and often provide services to support not only the fishermen, but the community at large.

“We went door to door to donate around 8,000 pounds of halibut to the community in each of the last two years to give every home around four to ten pound of halibut filets,” Hazel says. “We also get to help out with food banks! It’s great to be able to help our communities whether it’s Port Townsend, Forks, Port Angeles, or Lower Ehlwa.”