Who Brings Your Seafood to You? An Interview with Robert Sudar, Independent Salmon Distributor 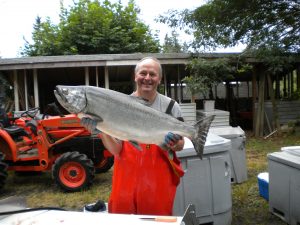 “I love salmon, they’re beautiful creatures,” says Robert Sudar, who currently works as a salmon distributor in Seattle. He has been involved in the fishing industry in one way or another for the past 50 years.

Robert began as a crewmember on boats in the San Juan Islands when he was a fresh high school graduate in 1971. Having grown up in the fishing community in Tacoma, he entered the industry with the help from his grandfather and a desire to earn money to go to college. That summer after graduation led to a lifelong passion: “When the season ended, I missed it. I probably wished I was still fishing instead of going to college.” The next summer, Robert was eager to get back to it and got a job on a boat out of Gig Harbor that fished in the San Juans, a boat he stayed with throughout college and until 1987. There are multiple methods of salmon fishing; during this time Robert worked primarily as a gillnetter, which involves casting out vertical panels of netting that float at various depths and catch the fish as they swim through.

After finishing college at the University of Washington he took on graduate school and a teaching stint at Washington State University, but he always found his way back to fish the San Juan Islands each summer. This pattern continued until it reached a point where his wife told him he needed to quit fishing. “I didn’t,” he laughs, saying he found a way to combine his engineering career with time to fish during the summers.

In the 1980s, Robert figured he could make a better profit by marketing the fish himself and bought a wholesaler’s license, starting with selling to individuals and to Puget Consumers Co-op (PCC). He says a night class at the University of Washington’s Experimental College (since closed) is what really launched his marketing career and helped him break into the market. A move on to family property in Longview, far from where he used to fish, cemented his path in marketing. Since 1988, Robert has been exclusively involved in marketing catch from fishermen on the Columbia River to the Seattle area.

Robert is in it for the long haul: this year marked his 40th year selling to PCC. He says that the salmon make it pretty tough to leave the industry: “They are a fabulous food source and really fit the ecology of the Northwest.” But salmon are not his favorite part of the job — his favorite part is the people he gets to interact with on the job. “The best part is the delivery. Taking them to the market and having people go head over heels happy with the really fresh fish they’re getting. Hearing back from [grocers] that their customers are super happy is really fun.” He says that some stores even keep a list of customers to call when he brings in his fish. 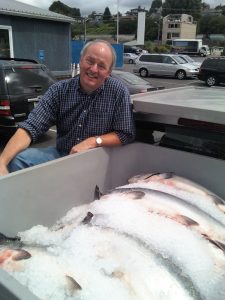 Robert laughs as he reminisces about his early fishing days. Many of these stories are about failure- after all, fishing is hard work. “Believe me, it’s easy to not catch fish,” he says. However, it is easy to see Robert’s deep appreciation for all aspects of the fishing industry as he recalls scenarios that seem impossibly serendipitous: not catching enough fish for an order but then having some canceled, catching too many fish but then finding more customers, not catching any but ending up fine after all. This supports his belief that “you have to be an optimist to be a fisherman; even when things are bad you have to believe they will get better or else you stop.”

This mentality doesn’t only serve him well in processing: during a fishing season in the San Juan Islands, there was a period when the fish weren’t showing up. A younger crewmember was getting worried, but Robert assured them that the water was perfect; the fish would come without a doubt. Sure enough, the salmon began to appear about forty five minutes later. Robert says that, truthfully, he didn’t know whether the fish would show up, but staying optimistic about the situation worked out for him- everyone stayed calm and in the end he turned out to be right.

This optimism and love for salmon and people has led Robert to enter the political field in order to support those who work in the fishing industry and to help it thrive. Robert emphasizes how important it is for consumers to understand the intricate network that their seafood passes through before it gets to them. At the end of the day, he is happy to get to share salmon with people and doesn’t show any signs of stopping.