Who Brings Your Seafood to You? An Interview with Steve Seymour of Drayton Harbor Oyster Company

Looking ahead to National Seafood Month in October, we are sharing this profile of a local seafood entrepreneur

Steve Seymour — a fisheries biologist-turned-oyster farmer — has always been passionate about the marine world. Prior to opening Drayton Harbor Oyster Company, Steve spent most of his career running salmon hatcheries for the Lummi Nation, working on fish enhancement projects throughout Washington State.

Throughout his career as a biologist, Seymour also participated in oyster growing as a hobby. He got involved with oyster production by leasing an area in Drayton Harbor in the mid-1980s. While water quality was monitored during that time, sampling efforts started to increase. As more and more water samples from Drayton Harbor were analyzed, the state decided it would be best to close areas of the bay until it improved. In 1997, the bay closed completely. Drayton Harbor oyster farmers and the Puget Sound Restoration Fund worked tirelessly to clean up the surrounding waters and reopen the bay. These efforts were supported through Whatcom County, designating the area as a shellfish protection district. Additionally, the city invested in better sewage systems, septic infrastructure was replaced, and farm management plans were established to minimize runoff. A nonprofit community oyster farm was created and operated by shareholders as a way to engage the community around the conservation and protection of this significant ecosystem. After ten years, areas of the bay began to reopen. By 2013, oysters were able to be grown and harvested year round in a part of the bay. This led to Steve Seymour and his son, Mark Seymour, opening Drayton Harbor Oyster Company.

What initially was a fun hobby became a career after Seymour’s retirement. Operating on his original lease from the 1980s, the Seymours utilized the thirty acres for the floating oyster system, nursery and farm. Drayton Harbor Oyster Company mainly grows Pacific oysters, as they have proven to thrive in that location. However, some of the farm has also been dedicated to growing Olympia oysters as an effort to restore the species in the Puget Sound. Through farming oysters over several years, Seymour learned how quickly an oyster could grow from seed to harvest. Within a year and a half, a two inch oyster could be easily grown. This quick turnaround, in conjunction with the high quality oysters produced in these waters, allowed Mark and Steve Seymour to open a store, selling their beautiful oysters to the community of Blaine, Washington.

What started as a small wholesale shop quickly turned into a local oyster shop. Over time, many folks within the community continued to make requests which led to the store becoming a raw bar, their first dive into food service. Over time, this small wholesale shop evolved into a bustling farm-to-table restaurant, attracting visitors from all over the Pacific Northwest. Drayton Harbor Oyster Company was in the process of expanding their food service operations as soon as COVID-19 hit Washington. This forced Steve and Mark Seymour to evaluate their business strategies, their farm, and their restaurant. Unlike many other restaurants who have struggled with food shortages and supply chain issues during the pandemic, Drayton Harbor Oyster Company was able to thrive as their farm is the main supplier for their restaurant. 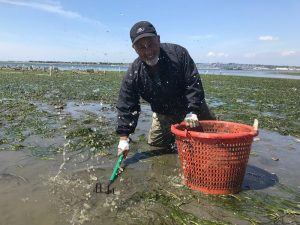 Running a business requires wearing many hats, and Drayton Harbor Oyster Company is no different. Due to the nature of their business, Mark and Steve Seymour split their duties between the farm and the restaurant. Over time, Steve has gravitated towards working in the restaurant while Mark enjoys spending more time on the farm. When asked what the most rewarding aspect of running this business is, Steve remarked he is “so blessed to work with [his] kid.” Despite gravitating towards different areas of the business, these two are tied to the hip and share similar visions when it comes to the future of Drayton Harbor Oyster Company. That is conveyed through their passion of creating a sustainable business that not only supplies high quality food to their community, but additionally serves a benefit to the surrounding ecosystems. Both Steve and Mark have worked as fisheries biologists, and bring much of that knowledge to oyster farming. Steve says “shellfish was always a hobby, making a product that is invisible and then stand back, two years later you have a carpet of oysters.”

Oyster growers have to incorporate a unique blend of science, farming, public relations and food service. They provide a high quality protein that facilitates water filtration and plays a role in carbon cycling. Despite their backgrounds as biologists, Steve believes that many folks who harvest resources understand what is beyond the net. Many folks working in seafood, fisheries and aquaculture production know that to continue this craft, the ecosystems around them need to thrive. This is what motivates the Seymours as the current biggest challenge to their business is navigating their oyster farm while maintaining water quality in Drayton Harbor.

The restaurant is dependent on the oysters and the environmental challenges that come with it. The store without oysters would be a different space. To ensure that both aspects of their business thrive, the bay must remain healthy to keep the production healthy. The basin where the oysters are grown is becoming urbanized and there is more development now than ever before. That is an asset as it draws people to the area which in turn supports Drayton Harbor Oyster Company. However, there are also challenges associated with increased traffic in the area. Seymour remarks that he wants people there for the business, however more people and more development could threaten the water quality of the bay. One thing they learned early on in having the store was that it got the community excited, which helps motivate efforts towards cleaner water and conservation efforts around the bay. Steve has several ideas on ways to continue to involve the community, including expanding aquaculture operations and adding an educational marine center on the bay.

While Drayton Harbor Oyster Company has grown and evolved throughout time, their goals have remained the same. Mark and Steve Seymour will continue to run their sustainable oyster operation and farm to table restaurant, serving tremendous food and passion to their surrounding community.